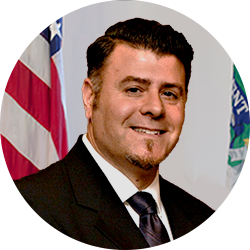 James J. Nicolo, Jr. joined the U.S. Mint in October 2005, as an Electronics Engineer in the Production Maintenance Division (PMD) of the United States Mint at Philadelphia. In 2008, he was promoted to be the Lead Electro-Mechanical Engineer for the plant and shortly thereafter was called upon to concurrently serve as Acting Chief of PMD for the next four years, until he was fully promoted into the position in 2012. In 2017, he was promoted to the position he currently occupies, as the Deputy Superintendent, and has served in multiple appointments as the Acting Superintendent since that time.

Prior to joining the Mint, James began his civilian federal career working for the Department of the Army at Picatinny Arsenal, in the Advanced Armaments Technology Team, performing research, development, and testing of directed energy devices and asymmetric weapons systems. He then transitioned to the Department of the Navy, working at the Philadelphia Naval Ship Systems Engineering Station, in the Emerging Technologies Department of the Power and Propulsion Branch, as an engineer modernizing and providing lifecycle engineering support for surface fleet gas turbine engines.