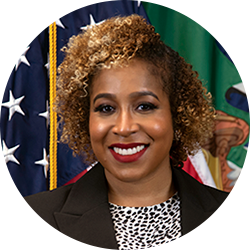 Ashley Reid joined the United States Mint in April 2020 to serve as the Equal Employment Opportunity (EEO) Officer in the Diversity Management and Civil Rights Office.

Prior to the Mint, Ashley spent two years as the Complaints Program Manager at the U.S. Agency for Global Media (USAGM), formerly the Broadcasting Board of Governors. In that role, Ashley addressed a two year complaints backlog and brought the Agency in compliance within six months of her arrival, receiving a Superior Accomplishment Award. Preceding this position, Ashley was the Senior EEO Specialist at National Transportation Safety Board, where she became adept at writing EEO policy letters and focused on Diversity and Inclusion programs and training, while drafting the Management Directive 715.

In 2009, Ashley began her federal government career at Red River Army Depot in Texarkana, Texas, when she was accepted into the Army Materiel Command Fellows Program, Class 10. The Fellows Program allowed her to learn about the Army’s logistical support of the warfighter while obtaining a Master Degree in Business Administration from Texas A&M – Texarkana. Upon completion of the 13-month degree requirements, Ashley was selected by Installation Management Command (IMCOM) to be their first EEO Fellow.

Being an IMCOM Fellow allowed Ashley to hone her EEO skills. In her six year tenure with the Army, she was an EEO Counselor, Disability Program Manager, and Complaints Program Manager – responsible for an 11,000+ service population and 81 tenant commands. Her final year with the U.S. Army also saw her serve as the Deputy to the EEO Officer, as well as the interim Acting EEO Officer at the U.S. Army War College in Carlisle, Pennsylvania. Ashley was awarded the Achievement Medal for Civilian Service twice during her Army career.

Ashley Reid graduated from Hampton University in 2006 with a Bachelor of Science degree in Marketing. In 2017, Ashley became the Co-Chair of the Small Agency Council (SAC), a think tank comprised of 40+ small federal government agencies in the Washington, DC area and also functions as their Interagency Training Initiative Coordinator. Ashley was recently married and lives with her husband, who served in the U.S. Army, in Maryland.