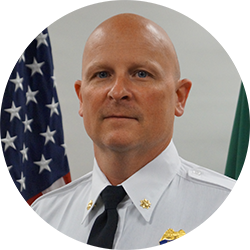 Prior to his career with the Mint Police, Dean spent five years on active duty as a military police officer in the U.S. Army. Dean spent time overseas and was deployed during the Persian Gulf War and served throughout Operation Desert Shield, Operations Desert Storm, and the Liberation of Kuwait.

Dean has completed multiple supervisory and leadership courses throughout his 31 years of law enforcement career and is perusing his degree in criminal justice from Post University.