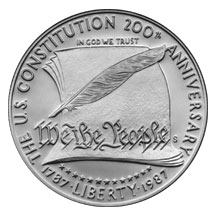 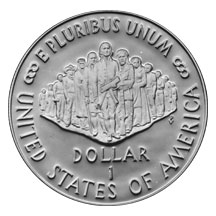 Released in 1987, this coin was authorized to commemorate the Bicentennial of the Constitution of the United States.

The obverse design of the coin features 13 stars, a quill pen laid across a sheaf of parchments, and "We the People".

The reverse of the coin features a portrait of several human figures in diverse garb, representing the wide cultural and social spectrum America has embraced and represented for over 200 years.