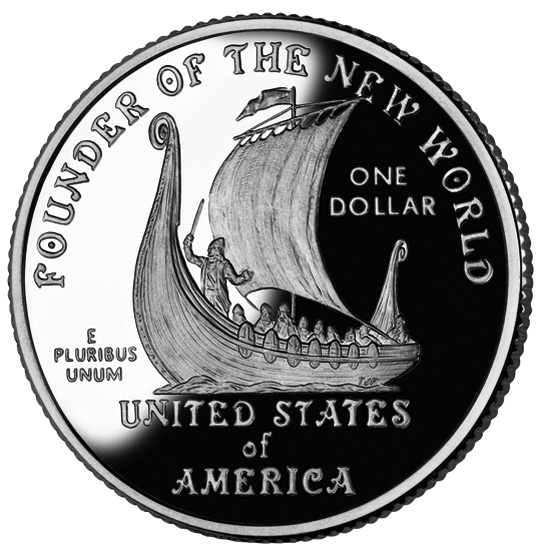 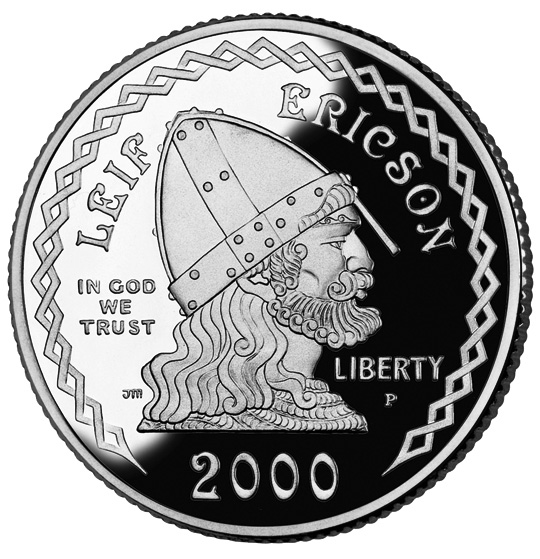 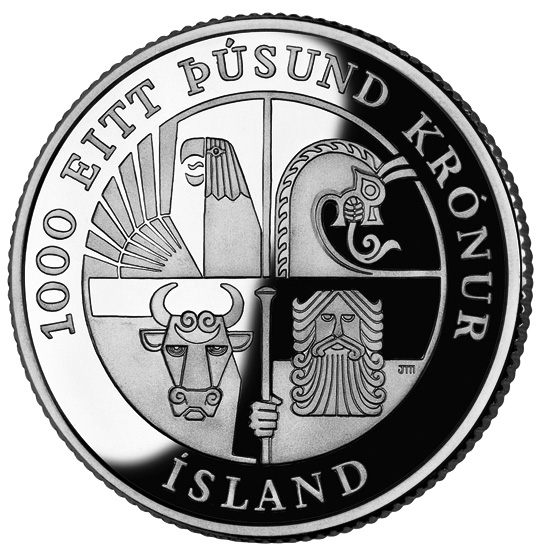 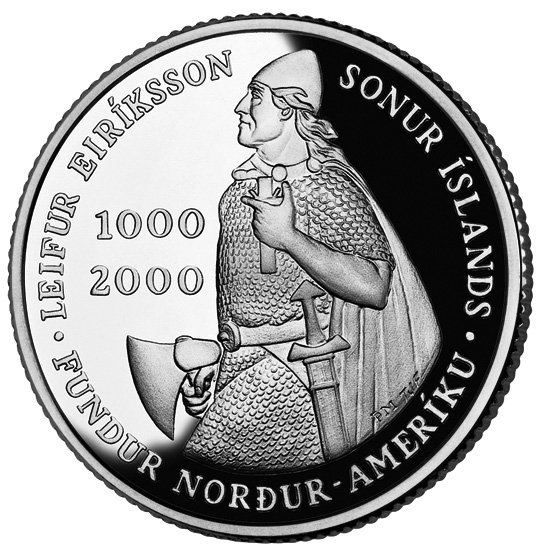 The coins were authorized to commemorate the millennium of the New World’s discovery by the Viking Leif Ericson.

Leif Ericson, the oldest son of Eric the Red, became the first European to set foot on North America after he outfitted ships to follow the route of trader Bjarni Herjulfsson, who came back with tales of the beautiful land he had seen when he was blown off course. Leif Ericson came to the New World in much the same way — blown off course when he traveled from Norway to Greenland in 1000 A.D.

Ericson found farmland rich in timber and waters swimming with salmon. He first came upon what is now Labrador, then established a camp in Newfoundland, and finally, arrived in what could have been northern Newfoundland or even Cape Cod and gave it the name “Vinland.”

The Native Americans fiercely resisted settlement by the Vikings and within a year of his momentous discovery, Ericson abandoned Vinland and returned to Greenland.

The U.S. and Iceland each authorized their own coin in this two-coin set to mark the millennium of Ericson’s discovery of the New World. These are the first modern era legal tender silver commemorative coins released jointly by the United States and any other country.

Recipient Organization: The University of Virginia and the Central Bank of Iceland

Ten dollars from each coin sold benefits the Leifur Eiriksson Foundation for the purpose of funding graduate-level student exchanges between the United States and the Republic of Iceland. The foundation, which promotes the advanced study of Iceland's history; culture; literature; science; law; business; medicine; and technology, is a joint venture between the University of Virginia and the Central Bank of Iceland.

The reverse, by artist James Ferrell, shows a Viking ship under full sail, coming toward the New World with Leif Ericson at the helm.

The Leif Ericson Silver 1000 Kronur, designed by Icelander Throstur Magnusson, shows an interpretation of the Stirling Calder statue of Leif Ericson on the obverse. The statue was given to the Icelandic government in 1930 by the United States to commemorate the millennium of the Iceland parliament.

The reverse of the coin shows a stylized drawing of the Icelandic Coat of Arms, representing the country's four guardians: the eagle, the dragon, the bull and a giant. The guardians stand watch over the north, west, east, and south of Iceland.