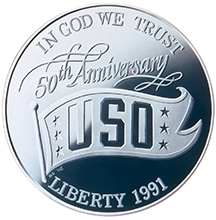 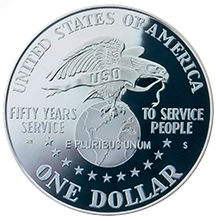 Released on June 8, 1991, this dollar commemorated the 50th anniversary of the United Services Organization (USO).

Fifty percent of the surcharges collected from coin sales were to be distributed to the USO to be used to fund programs including airport centers, fleet centers, family and community centers, and celebrity entertainment. The remaining fifty percent of the proceeds from the coin sale surcharges were to be returned to the Federal Treasury for the purposes of reducing the national debt.

The obverse design of the coin features an image of the USO pennant and the words 50th Anniversary.

The reverse of the coin features a design of an eagle perched upon a globe with a USO banner in its beak and the USO's anniversary theme: "Fifty Years of Service to Service People" and 11 stars.