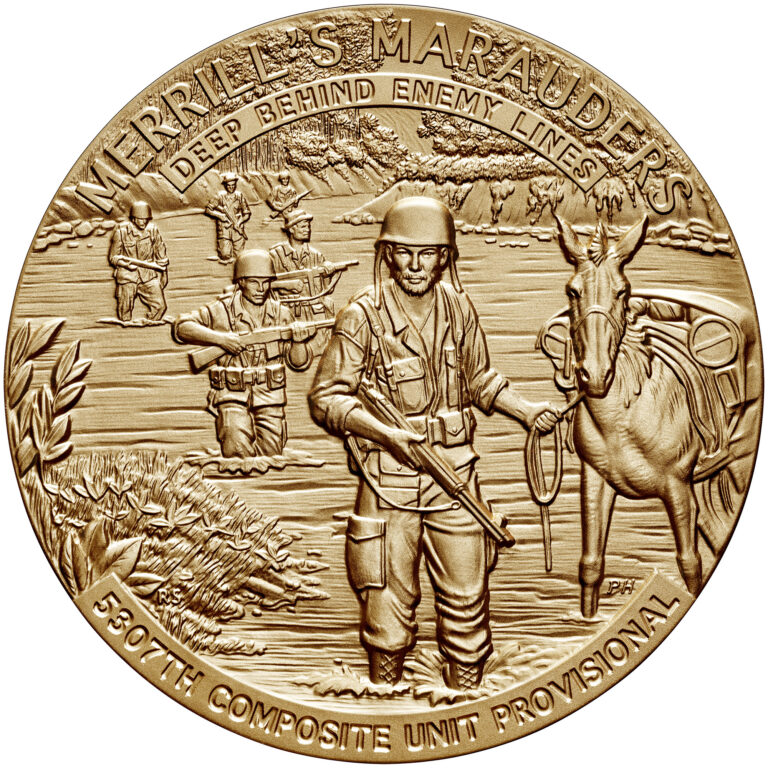 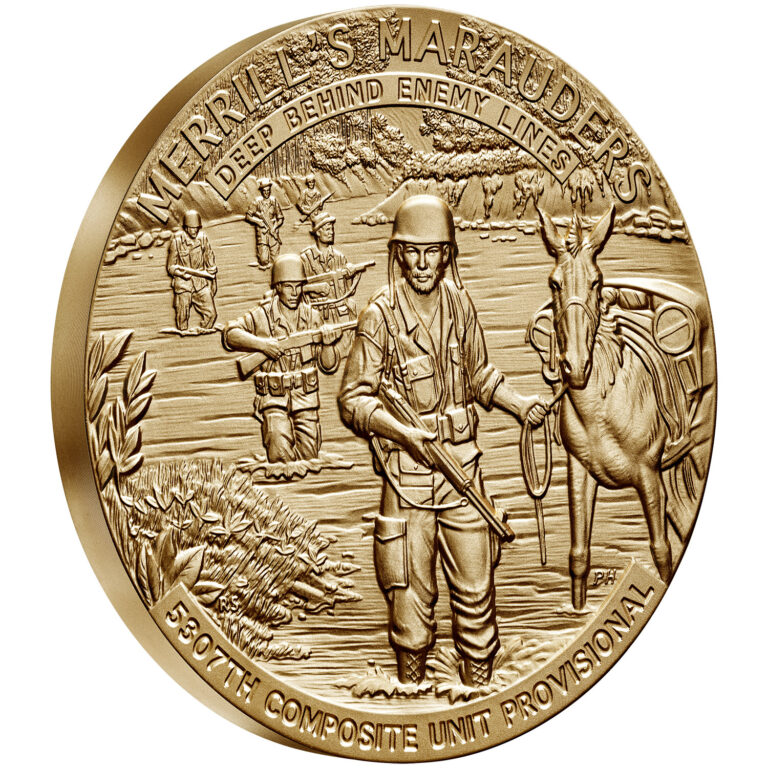 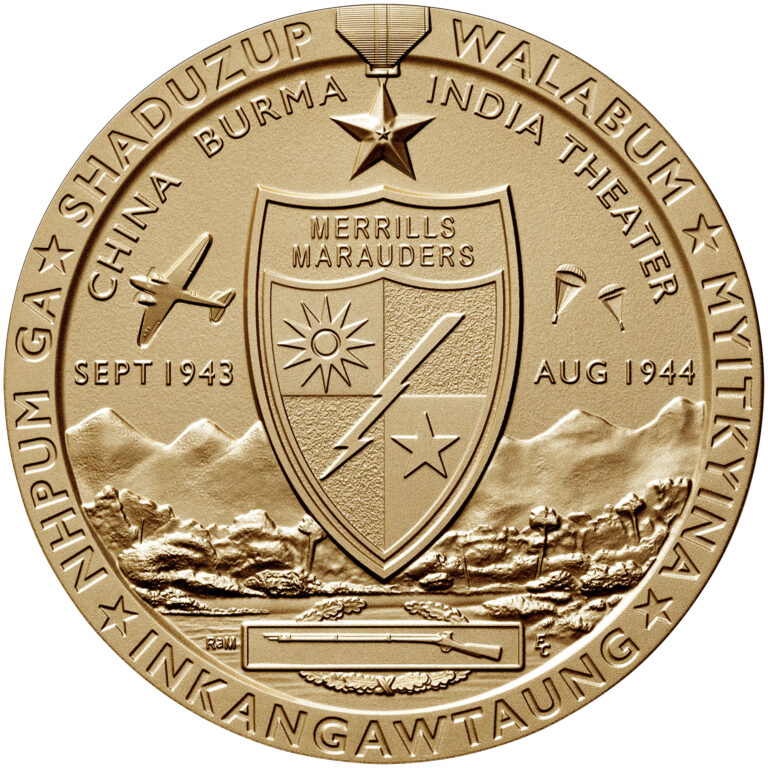 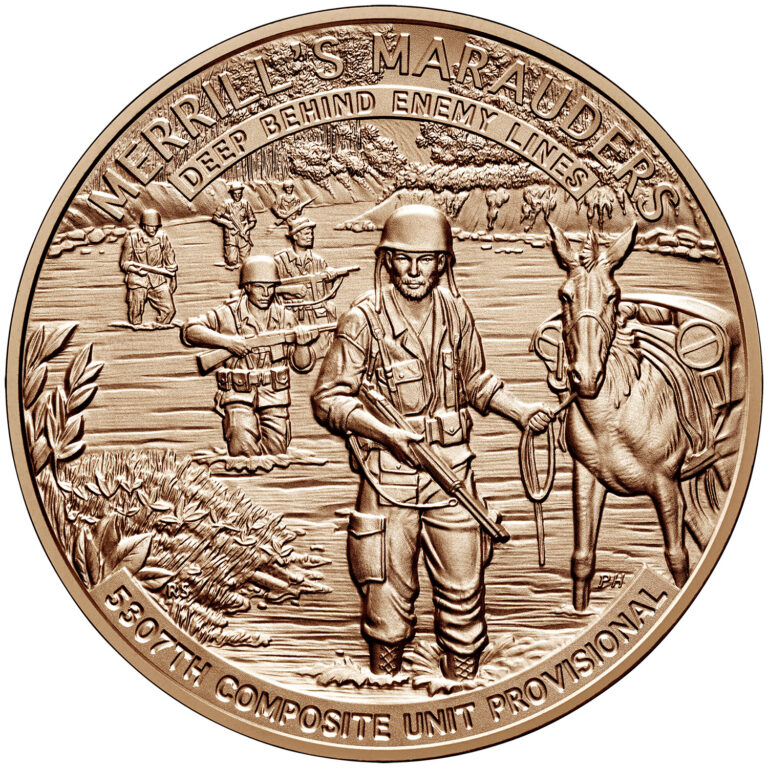 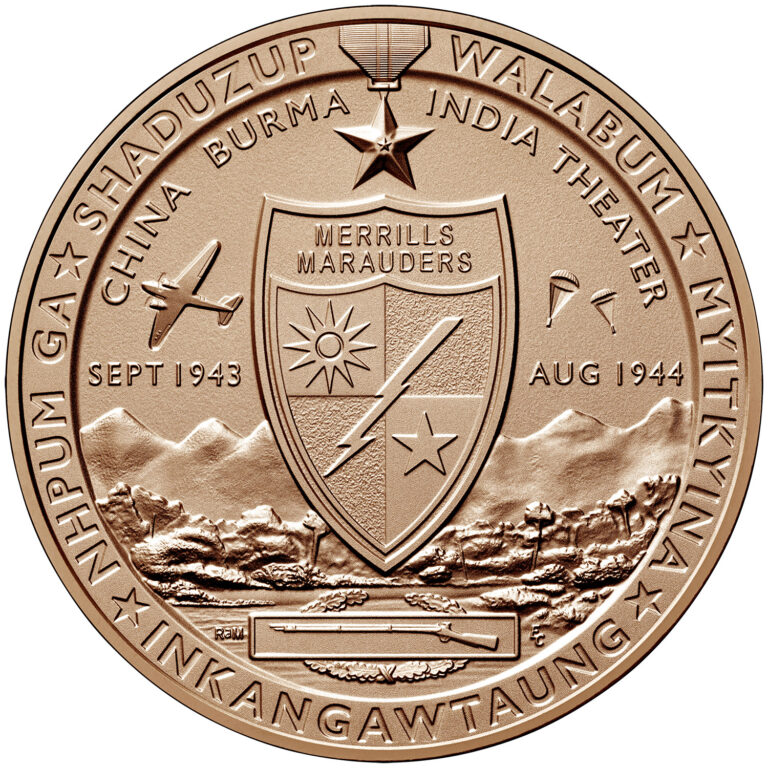 This medal is a bronze duplicate of the Congressional Gold Medal presented to the Merrill’s Marauders in recognition of their bravery and outstanding service in the jungles of Burma (Myanmar) during World War II.

In 1943, approximately 3,000 infantrymen volunteered to go behind Japanese lines in Burma. The men came from many ethnic backgrounds and included a Native American code talker and 14 Nisei interpreters.

They were trained in India by British long range penetration groups (also known as the Chindits). After being transferred from British control to U.S. command, the unit was designated in January 1944 as the 5307th Composite Unit Provisional, code-named Galahad.

Under the command of Brigadier General Frank D. Merrill, the Marauders defeated the larger and better-equipped elite Japanese 18th Division in five major battles and 30 minor engagements. The soldiers marched through dense jungles, rugged mountains, and fast moving rivers, as well as the monsoon rains. Both the men and the mules used to transport supplies and heavy equipment suffered from disease. Even when confronted with these impossible conditions, the unit made military history by walking almost 1,000 miles, farther than any WWII fighting force.

Their final objective was capturing the Myitkyina Airfield so that allied planes could fly safely over the eastern Himalaya Mountains, with supplies and troops to connect the treacherous Burma and Ledo roads.

The capture of the airfield marked the end of Merrill’s Marauders as a fighting unit. On August 10, 1944, the remaining men became part of the 475th Infantry Regiment and continued to fight the Japanese in Burma. Of the initial 3,000 Merrill’s Marauders, only 1,310 survived to the end of the campaign. Of the survivors, only about 200 were considered “combat-capable.”

For their bravery, every member of the Merrill’s Marauders was awarded the Bronze Star and the Presidential Unit citation. The modern 75th Ranger Regiment honors its lineage to the Marauders by wearing the Marauder patch as their crest.

The obverse design displays a group of Merrill’s Marauders crossing a river in Burma, with the foreground muleskinner leading a pack mule.

The reverse design depict the Merrill’s Marauders patch positioned just below a Bronze Star, an award every member of the unit received for their bravery. The Burmese mountains and jungle appear in the background with a Douglas C-47 Skytrain dropping supplies for the Marauders, and the Marauders’ five key battles circumscribe the rim of the design. The designs also includes the Combat Infantry Badge.