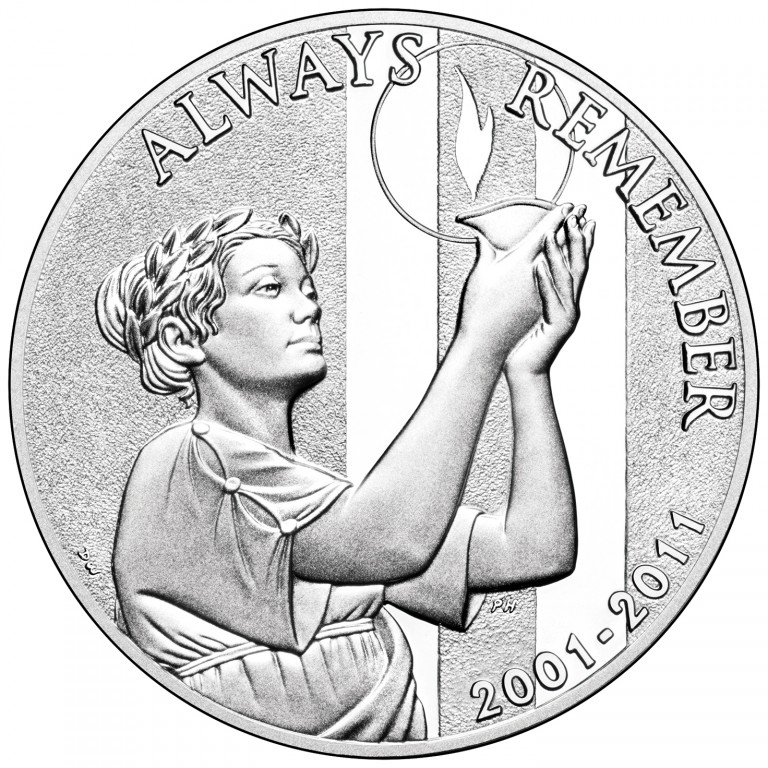 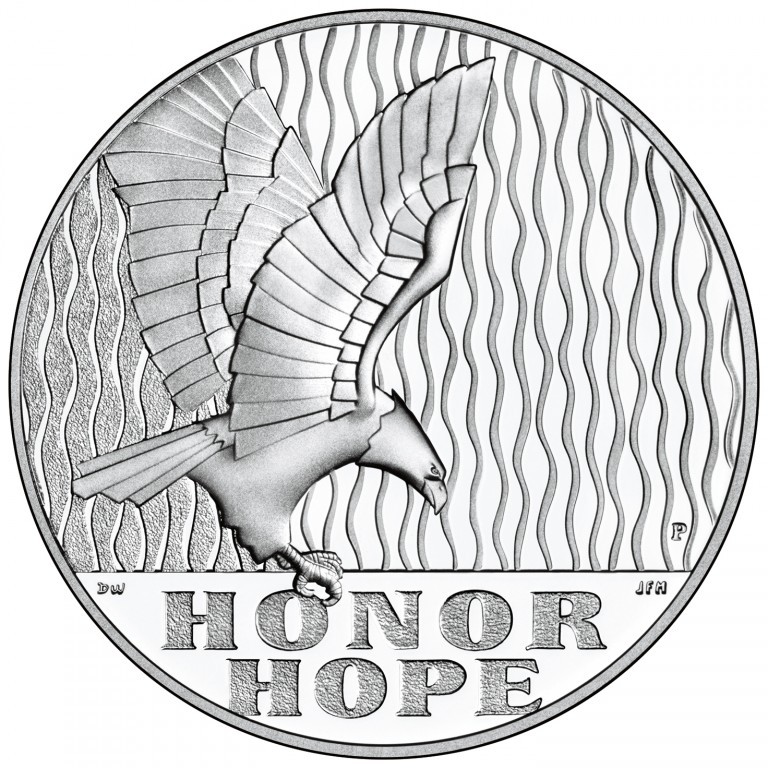 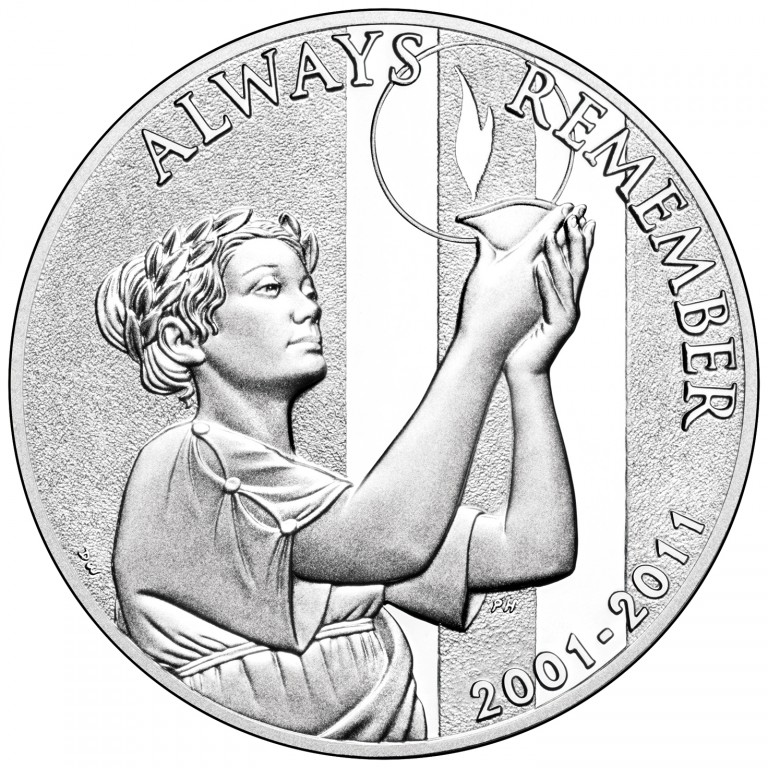 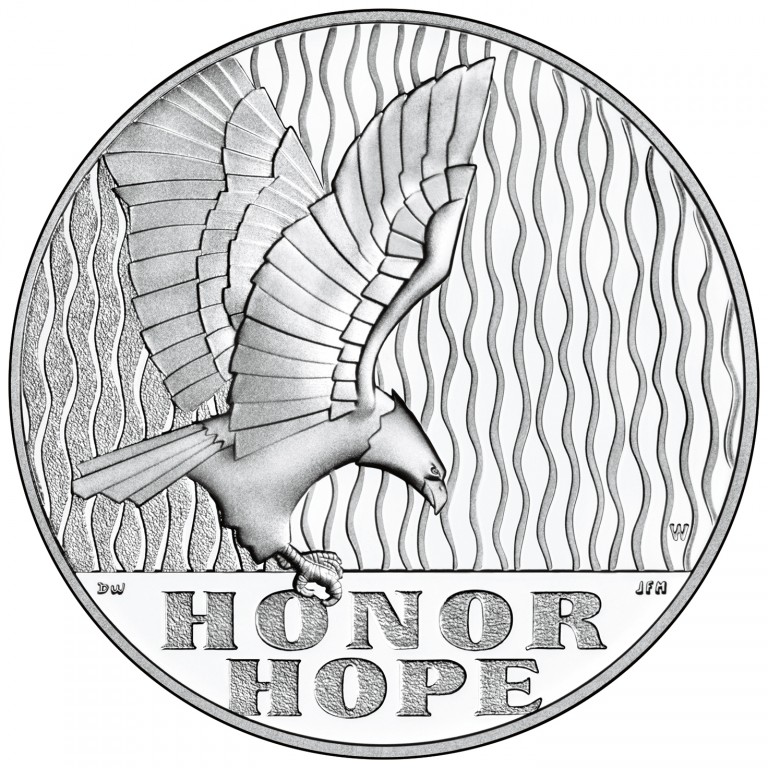 On September 11, 2001, nearly 3,000 people were killed in terrorist attacks at the World Trade Center in New York City, the Pentagon in Arlington, Va. – across the river from Washington, D.C. – and in a thwarted attack and subsequent plane crash in a field in Shanksville, Pa. Hundreds of courageous first responders risked their lives to save others and many perished while performing their sworn duty. In the aftermath of the attacks, people throughout the country and around the world came together to remember and honor those who perished in the attacks.

Signed by President Obama on August 6, 2010, the act requires the Secretary of the Treasury to strike and offer for sale up to 2 million one-ounce silver 2011 September 11 National Medals. The medal’s designs are emblematic of the courage, sacrifice and strength of those individuals who perished in the terrorist attacks; the bravery of those who risked their lives to save others that day; and the endurance, resilience and hope of those who survived.

The National September 11 Memorial & Museum at the World Trade Center

The National September 11 Memorial & Museum is a private not-for-profit organization overseeing the design and funding of the memorial and museum at the World Trade Center site. The memorial will honor the nearly 3,000 people who perished in the attacks of both September 11, 2001, and February 26, 1993. Within the footprints of the former twin towers will be two large reflecting pools of water where the largest man-made waterfalls in the country will be located. Each pool is about an acre in size. The names of the nearly 3,000 individuals who were killed in the 2001 attacks in New York City, Pennsylvania, and the Pentagon, as well as in the 1993 World Trade Center bombing, will be inscribed around the edges of the pools.

The mission of the museum, also located at the World Trade Center site, will bear solemn witness to the terrorist attacks of September 11, 2001, and February 26, 1993. The museum honors the nearly 3,000 victims of these attacks and all those responders who risked their lives to save them and others, as well as the thousands who survived. The museum demonstrates the consequences of terrorism on individual lives and its impact on local communities, the Nation and the world and symbolizes the triumph of the human spirit.

After consultation with the U.S. Commission of Fine Arts and National September 11 Memorial & Museum, and review by the Citizens Coinage Advisory Committee, the United States Mint recommended an obverse (heads side) design by United States Mint Artistic Infusion Program Master Designer Donna Weaver. It features Lady Liberty holding the Lamp of Remembrance. Behind her are beacons of light stretching skyward. Liberty, the lamp and the light symbolize not just the immeasurable loss on that fateful day, but also the resiliency and triumph of those who persevered.

For the reverse (tails), the United States Mint recommended a design, also by Weaver, depicting an eagle, symbolizing the strength of the survivors, families and Nation, against a backdrop of cascading water. The flowing water is emblematic of peace, serenity, healing and the continuity of life.