In 2016, the U.S. Mint marked the centennial anniversary of three numismatic icons with the release of three gold coins. 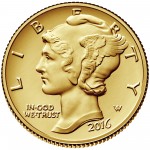 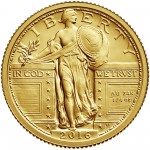 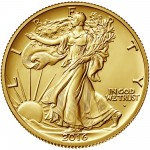 The Mercury Dime Centennial Gold Coin is the first of three 24-karat gold coins the Mint issued to commemorate the 100th anniversary of three classic coin designs first issued in 1916. The coin features Adolph A. Weinman’s original “Winged Liberty” design. This gold dime coin is commonly referred to as the Mercury Dime because of Liberty’s resemblance to the Roman god.