On December 21, 1891, a young physical education instructor named Dr. James Naismith introduced the game of basketball to his class at Springfield College, formally the YMCA International Training School in Springfield, Massachusetts. Three years later, the game was being played in more than a dozen nations.

Founded in 1959 in the city where basketball was born, the Naismith Memorial Basketball Hall of Fame is dedicated to honoring and celebrating the game and its creator. The “Hall” is recognized globally as the premier institution entrusted with recording and disseminating the history of the game of basketball, and recognizing and honoring the achievements of its greatest players, coaches, and contributors.

These commemorative coins were released in 2020 to recognize the Naismith Memorial Basketball Hall of Fame’s 60th anniversary.

As required by the Public Law, the Mint invited American artists to design a common obverse image that is emblematic of the game of basketball. The Secretary of the Treasury selected the design from a juried competition. Artistic Infusion Program artist Justin Kunz created the winning design in the 2020 Basketball Hall of Fame Commemorative Coin Competition. 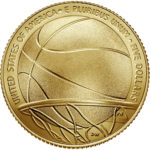 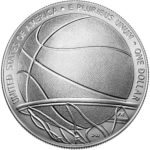 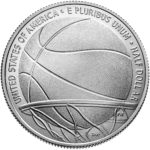 Prices for the coins include surcharges of $35 for each gold coin, $10 for each silver coin, and $5 for each half dollar clad coin. The law authorizes the surcharges to be paid to the Naismith Memorial Basketball Hall of Fame to fund an endowment that will enable increased operations and educational programming.