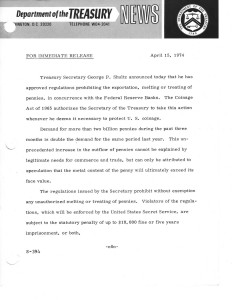 Treasury Secretary George P. Shultz announced today that he has approved regulations prohibiting the exportation, melting or treating of pennies, in concurrence with the Federal Reserve Banks. The Coinage Act of 1965 authorizes the Secretary of the Treasury to take this action whenever he deems it necessary to protect U.S. coinage.

Demand for more than two billion pennies during the past three months is double the demand for the same period last year. This unprecedented increase in the outflow of pennies cannot be explained by legitimate needs for commerce and trade, but can only be attributed to speculation that the metal content of the penny will ultimately exceed its face value.

The regulations issued by the Secretary prohibit without exemption any unauthorized melting or treating of pennies. Violators of the regulations, which will be enforced by the United States Secret Service, are subject to the statutory penalty of up to $10,000 fine or five years imprisonment, or both.