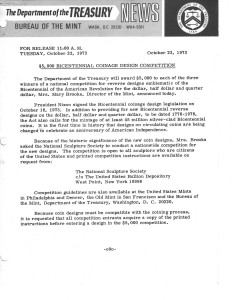 The Department of the Treasury will award $5,000 to each of the three winners of a national competition for reverse designs emblematic of the Bicentennial of the American Revolution for the dollar, half dollar and quarter dollar, Mrs. Mary Brooks, Director of the Mint, announced today.

President Nixon signed the Bicentennial coinage design legislation on October 18, 1973. In addition to providing for new Bicentennial reverse designs on the dollar, half dollar and quarter dollar, to be dated 1776-1976, the Act also calls for the mintage of at least 45 million silver-clad Bicentennial coins. It is the first time in history that designs on circulating coins are being changed to celebrate an anniversary of American Independence.

Because of the historic significance of the new coin designs, Mrs. Brooks asked the National Sculpture Society to conduct a nationwide competition for the new designs. The competition is open to all sculptors who are citizens of the United States and printed competition instructions are available on request from:

Competition guidelines are also available at the United States Mints in Philadelphia and Denver, the Old Mint in San Francisco and the Bureau of the Mint, Department of the Treasury, Washington, D.C. 20220.

Because coin designs must be compatible with the coining process, it is requested that all competition entrants acquire a copy of the printed instructions before entering a design in the $5,000 competition.