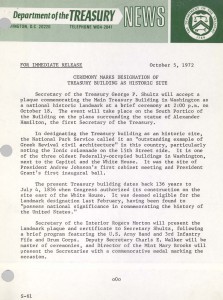 In designating the Treasury building as an historic site, the National Park Service called it an “outstanding example of Greek Revival civil architecture” in this country, particularly noting the Ionic colonnade on the 15th Street side. It is one of the three oldest Federally-occupied buildings in Washington, next to the Capitol and the White House. It was the site of President Andrew Johnson’s first cabinet meeting and President Grant’s first inaugural ball.

The present Treasury building dates back 136 years to July 4, 1836 when Congress authorized its construction on the site east of the White House. It was deemed eligible for the landmark designation last February, having been found to “possess national significance in commemorating the history of the United States.”

Secretary of the Interior Rogers Morton will present the landmark plaque and certificate to Secretary Shultz, following a brief program featuring the U.S. Army Band and 3rd Infantry Fife and Drum Corps. Deputy Secretary Charles E. Walker will be master of ceremonies, and Director of the Mint Mary Brooks will present the Secretaries with a commemorative medal marking the occasion.