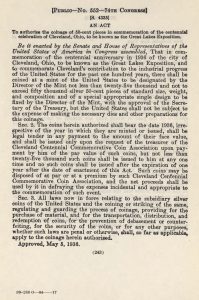 An Act To authorize the coinage of 50-cent pieces in commemoration of the centennial celebration of Cleveland, Ohio, to be known as the Great Lakes Exposition.

Be it enacted by the Senate and House of Representatives of the United States of America in Congress assembled, That in commemoration of the centennial anniversary in 1936 of the city of Cleveland, Ohio, to be known as the Great Lakes Exposition, and to commemorate Cleveland’s contribution to the industrial progress of the United States for the past one hundred years, there shall be coined at a mint of the United States to be designated by the Director of the Mint not less than twenty-five thousand and not to exceed fifty thousand silver 50-cent pieces of standard size, weight, and composition and of a special appropriate single design to be fixed by the Director of the Mint, with the approval of the Secretary of the Treasury, but the United States shall not be subject to the expense of making the necessary dies and other preparations for this coinage.

SEC. 2. The coins herein authorized shall bear the date 1936, irrespective of the year in which they are minted or issued, shall be legal tender in any payment to the amount of their face value, and shall be issued only upon the request of the treasurer of the Cleveland Centennial Commemorative Coin Association upon payment by him of the par value of such coins, but not less than twenty-five thousand such coins shall be issued to him at any one time and no such coins shall be issued after the expiration of one year after the date of enactment of this Act. Such coins may be disposed of at par or at a premium by such Cleveland Centennial Commemorative Coin Association, and the net proceeds shall be used by it in defraying the expenses incidental and appropriate to the commemoration of such event.

SEC. 3. All laws now in force relating to the subsidiary silver coins of the United States and the coining or striking of the same, regulating and guarding the process of coinage, providing for the purchase of material, and for the transportation, distribution, and redemption of the coins, for the prevention of debasement or counterfeiting, for the security of the coins, or for any other purposes, whether such laws are penal or otherwise, shall, so far as applicable, apply to the coinage herein authorized.