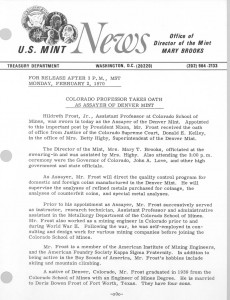 Hildreth Frost, Jr., Assistant Professor at Colorado School of Mines, was sworn in today as the Assayer of the Denver Mint. Appointed to this important post by President Nixon, Mr. Frost received the oath of office from Justice of the Colorado Supreme Court, Donald E. Kelley, in the office of Mrs. Betty Higby, Superintendent of the Denver Mint.

The Director of the Mint, Mrs. Mary T. Brooks, officiated at the swearing-in and was assisted by Mrs. Higby. Also attending the 3:00 p.m. ceremony were the Governor of Colorado, John A. Love, and other high government and state officials.

As Assayer, Mr. Frost will direct the quality control program for domestic and foreign coins manufactured in the Denver Mint. He will supervise the analyses of refined metals purchased for coinage, the analyses of counterfeit coins, and special metal analyses.

Prior to his appointment as Assayer, Mr. Frost successively served as instructor, research technician, Assistant Professor and administrative assistant in the Metallurgy Department of the Colorado School of Mines. Mr. Frost also worked as a mining engineer in Colorado prior to and during World War II. Following the war, he was self-employed in consulting and design work for various mining companies before joining the Colorado School of Mines.

Mr. Frost is a member of the American Institute of Mining Engineers, and the American Foundry Society Kappa Sigma Fraternity. In addition to being active in the Boy Scouts of America, Mr. Frost’s hobbies include skiing and mountain climbing.

A native of Denver, Colorado, Mr. Frost graduated in 1939 from the Colorado School of Mines with an Engineer of Mines Degree. He is married to Doris Bowen Frost of Fort Worth, Texas. They have four sons.