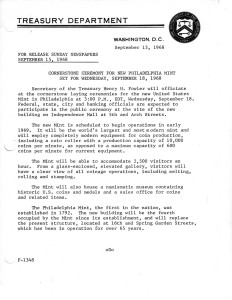 Secretary of the Treasury Henry H. Fowler will officiate at the cornerstone laying ceremonies for the new United States Mint in Philadelphia at 3:00 P.M., EDT, Wednesday, September 18. Federal, state, city and banking officials are expected to participate in the public ceremony at the site of the new building on Independence Mall at 5th and Arch Streets.

The Mint will be able to accommodate 2,500 visitors an hour. From a glass-enclosed, elevated gallery, visitors will have a clear view of all coinage operations, including melting, rolling and stamping.

The Mint will also house a numismatic museum containing historic U.S. coins and medals and a sales office for coins and related items.

The Philadelphia Mint, the first in the nation, was established in 1792. The new building will be the fourth occupied by the Mint since its establishment, and will replace the present structure, located at 16th and Spring Garden Streets, which has been in operation for over 65 years.