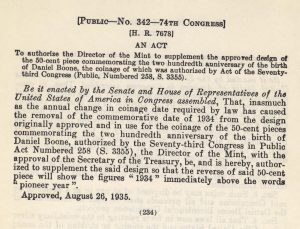 An Act To authorize the Director of the Mint to supplement the approved design of the 50-cent piece commemorating the two hundredth anniversary of the birth of Daniel Boone, the coinage of which was authorized by Act of the Seventy-third Congress (Public, Numbered 258, S. 3355).

Be it enacted by the Senate and House of Representatives of the United States of America in Congress assembled, That, inasmuch as the annual change in coinage date required by law has caused the removal of the commemorative date of 1934 from the design originally approved and in use for the coinage of the 50-cent pieces commemorating the two hundredth anniversary of the birth of Daniel Boone, authorized by the Seventy-third Congress in Public Act Numbered 258 (S. 3355), the Director of the Mint, with the approval of the Secretary of the Treasury, be, and is hereby, authorized to supplement the said design so that the reverse of said 50-cent piece will show the figures “1934” immediately above the words “pioneer year”.