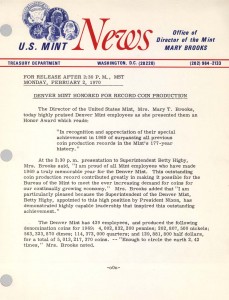 The Director of the United States Mint, Mrs. Mary T. Brooks, today highly praised Denver Mint employees as she presented them an Honor Award which reads:

“In recognition and appreciation of their special achievement in 1969 of surpassing all previous coin production records in the Mint’s 177-year history.”

At the 2:30 p.m. presentation to Superintendent Betty Higby, Mrs. Brooks said, “I am proud of all Mint employees who have made 1969 a truly memorable year for the Denver Mint. This outstanding coin production record contributed greatly in making it possible for the Bureau of the Mint to meet the ever increasing demand for coins for our continually growing economy.” Mrs. Brooks added that “I am particularly pleased because the Superintendent of the Denver Mint, Betty Higby, appointed to this high position by President Nixon, has demonstrated highly capable leadership that inspired this outstanding achievement.”