Statement of the Honorable Mary T. Brooks Director of the Mint Before the Public Buildings and Grounds Subcommittee of the House Committee on Public Works May 6, 1975 at 3:00 pm 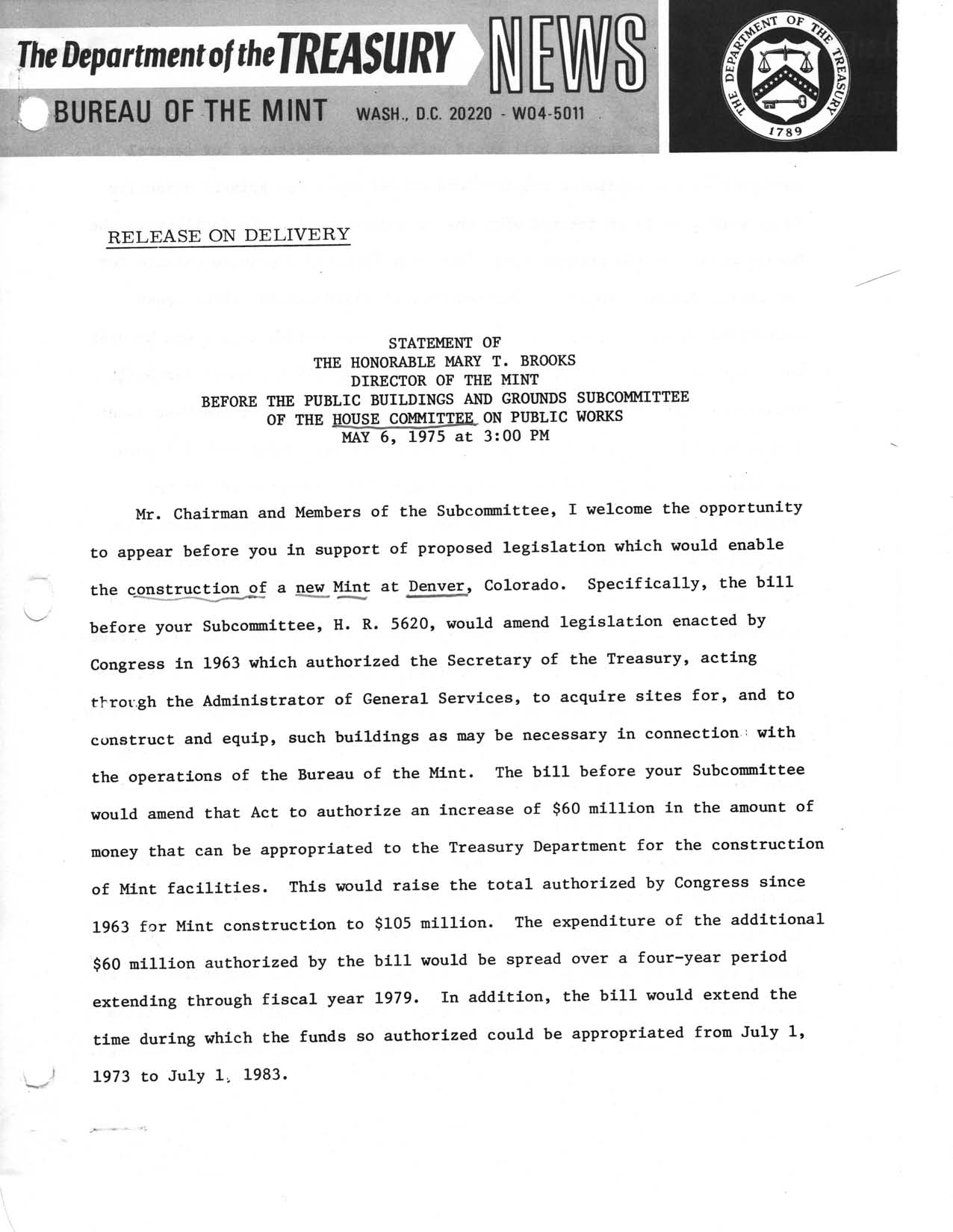 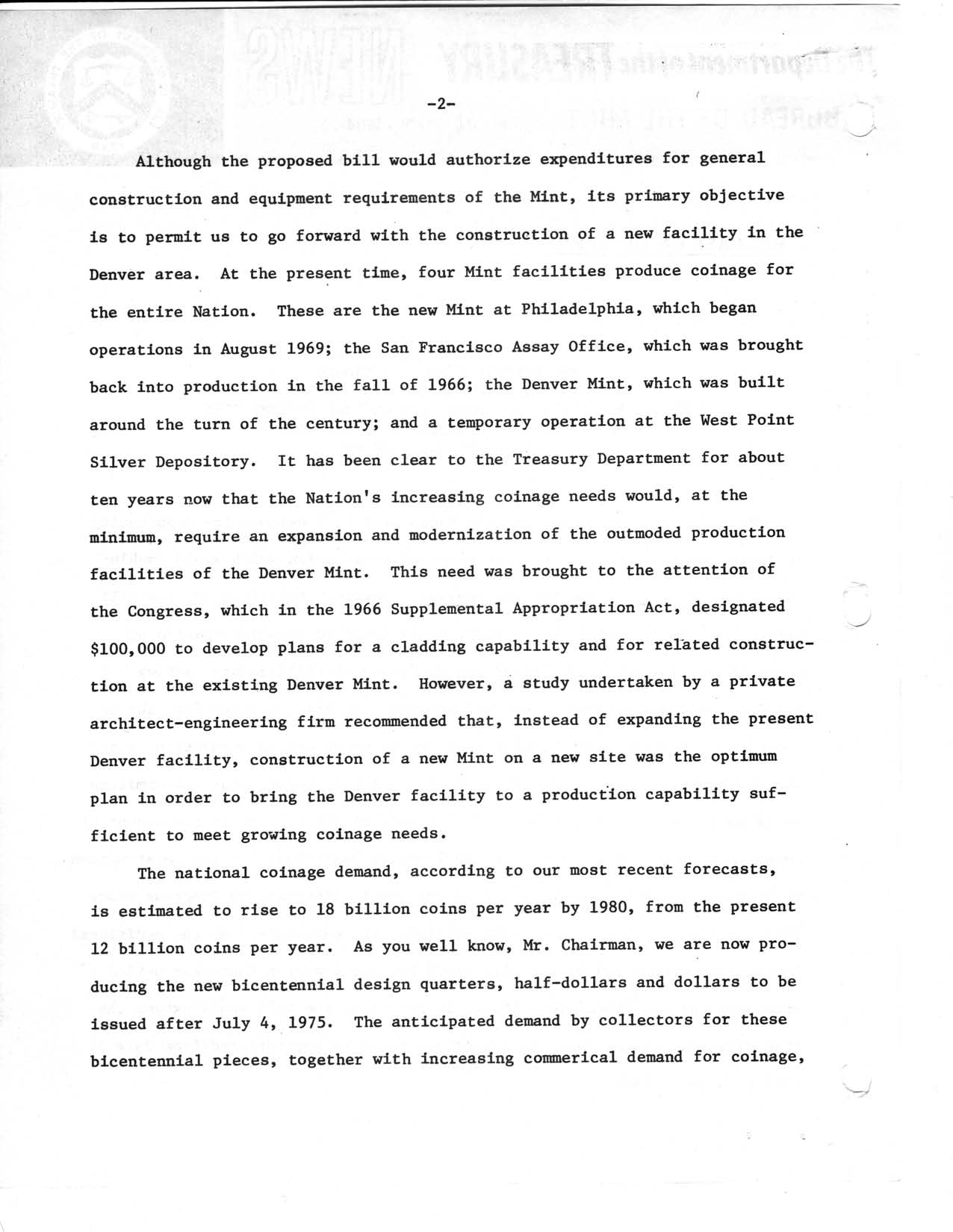 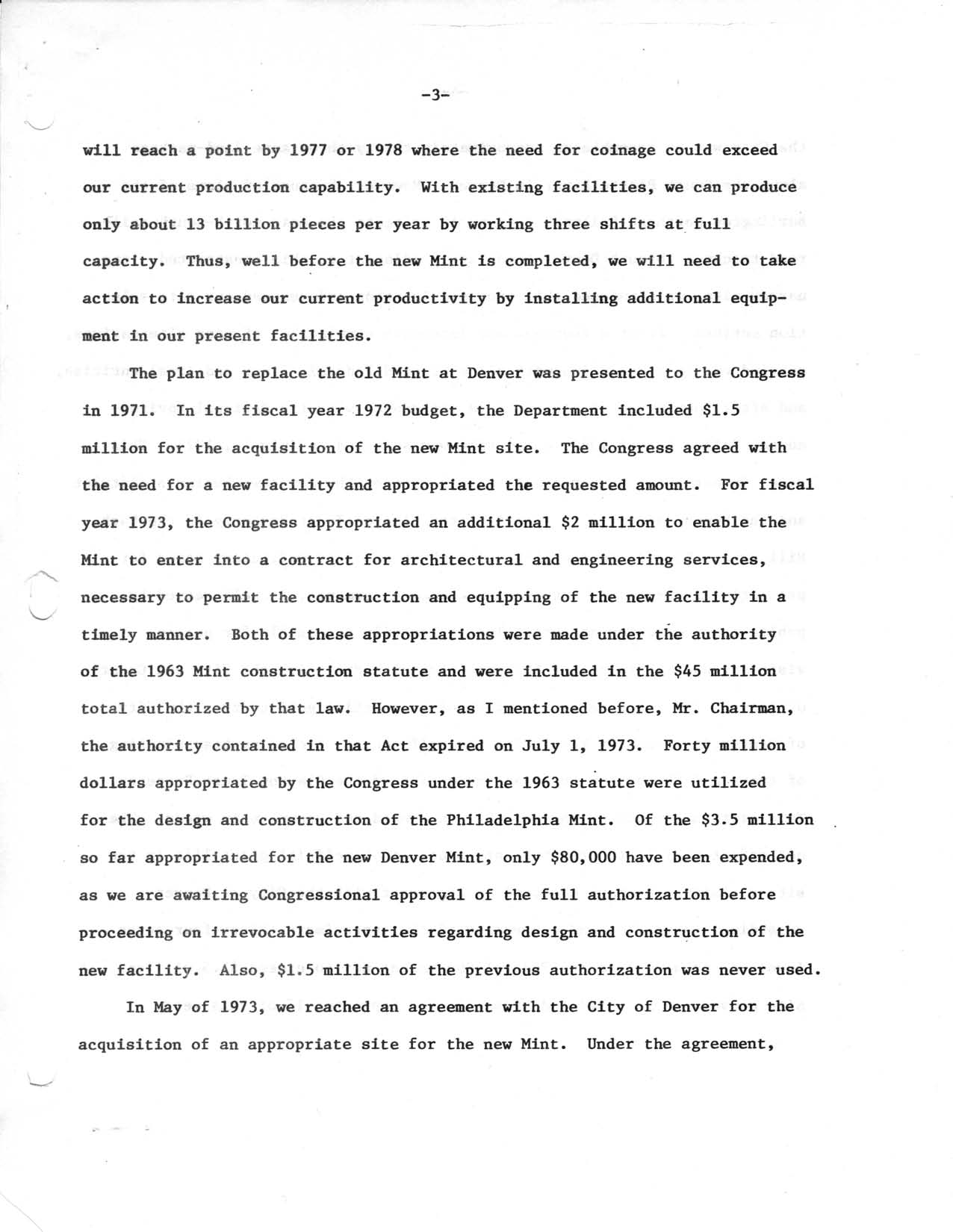 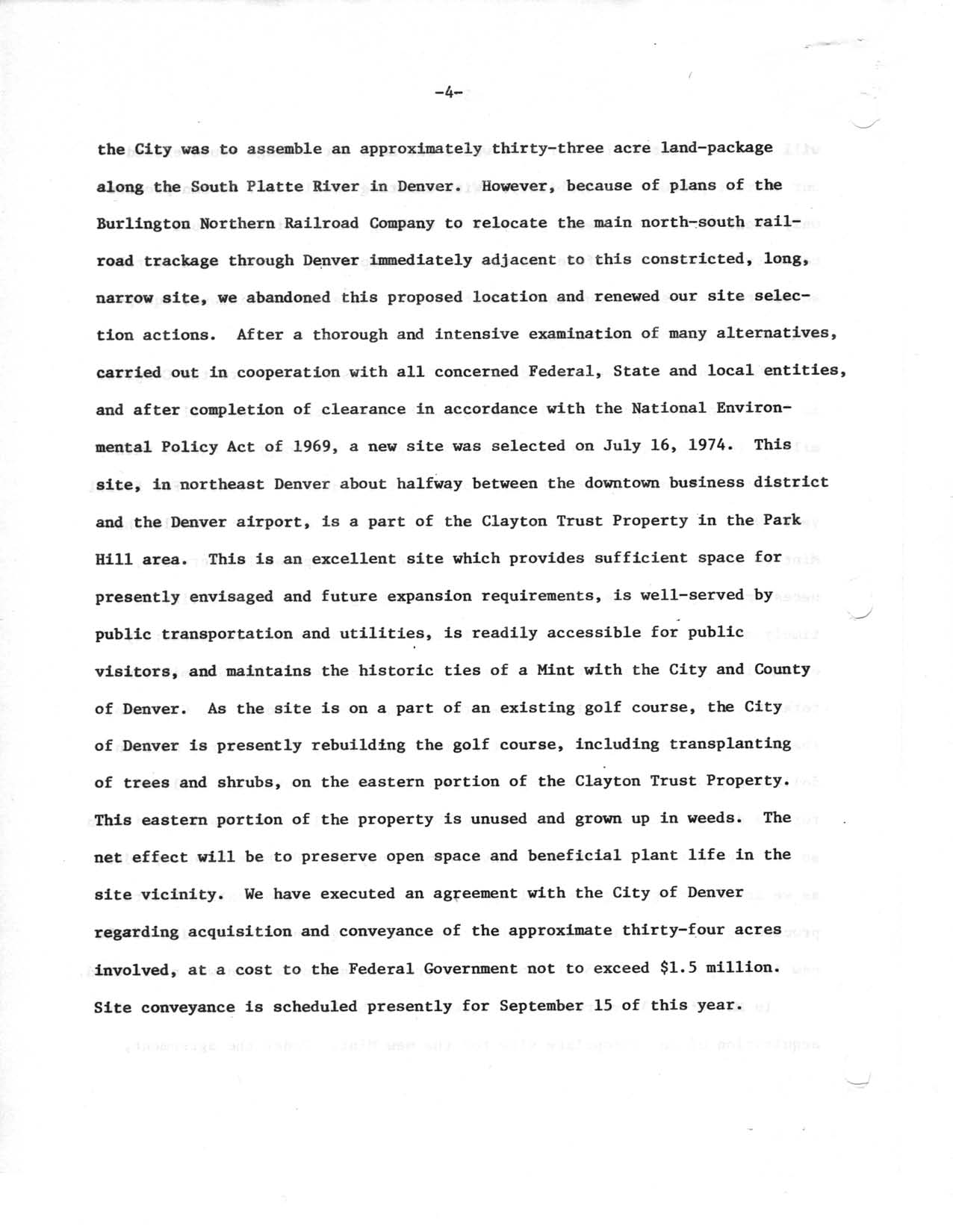 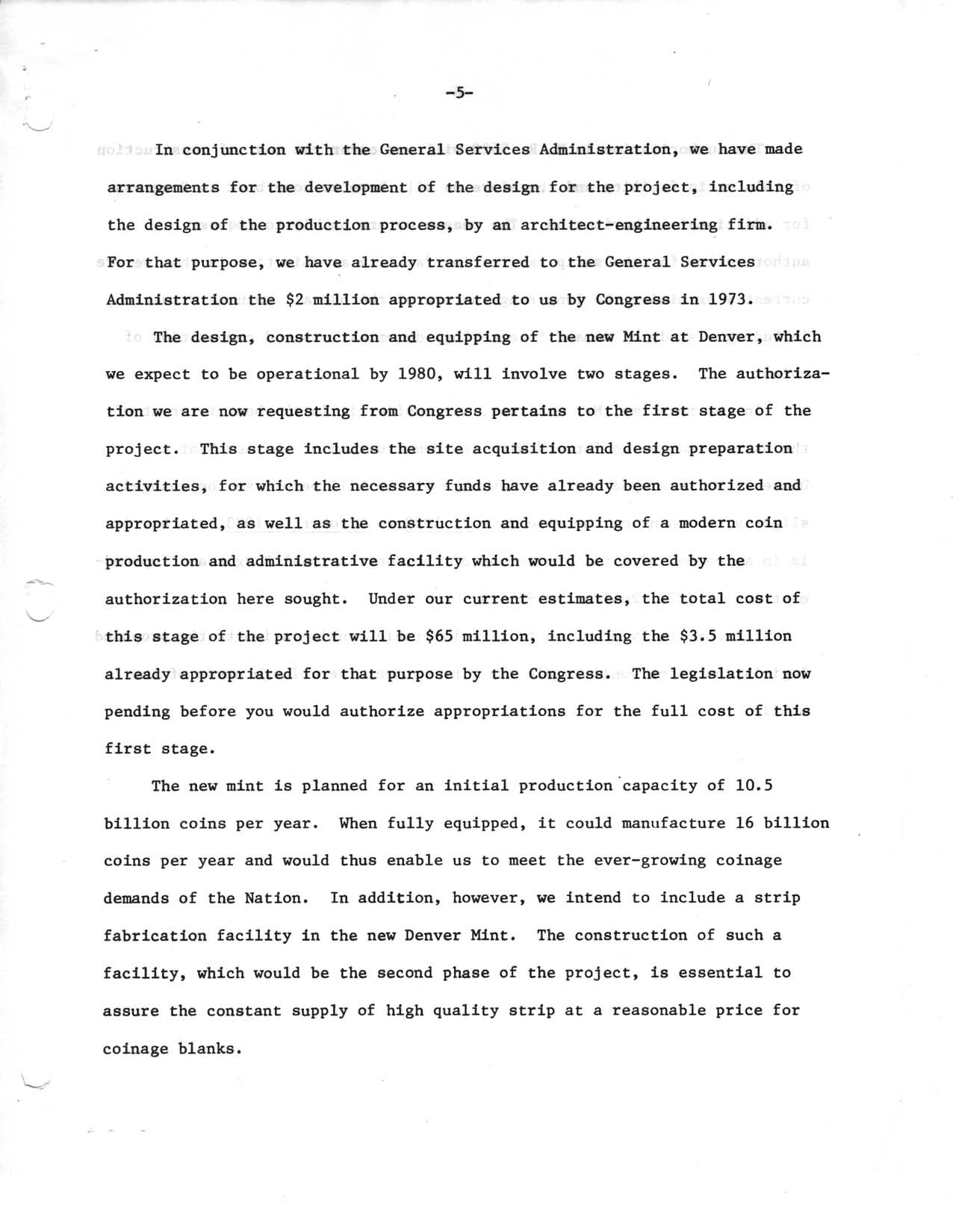 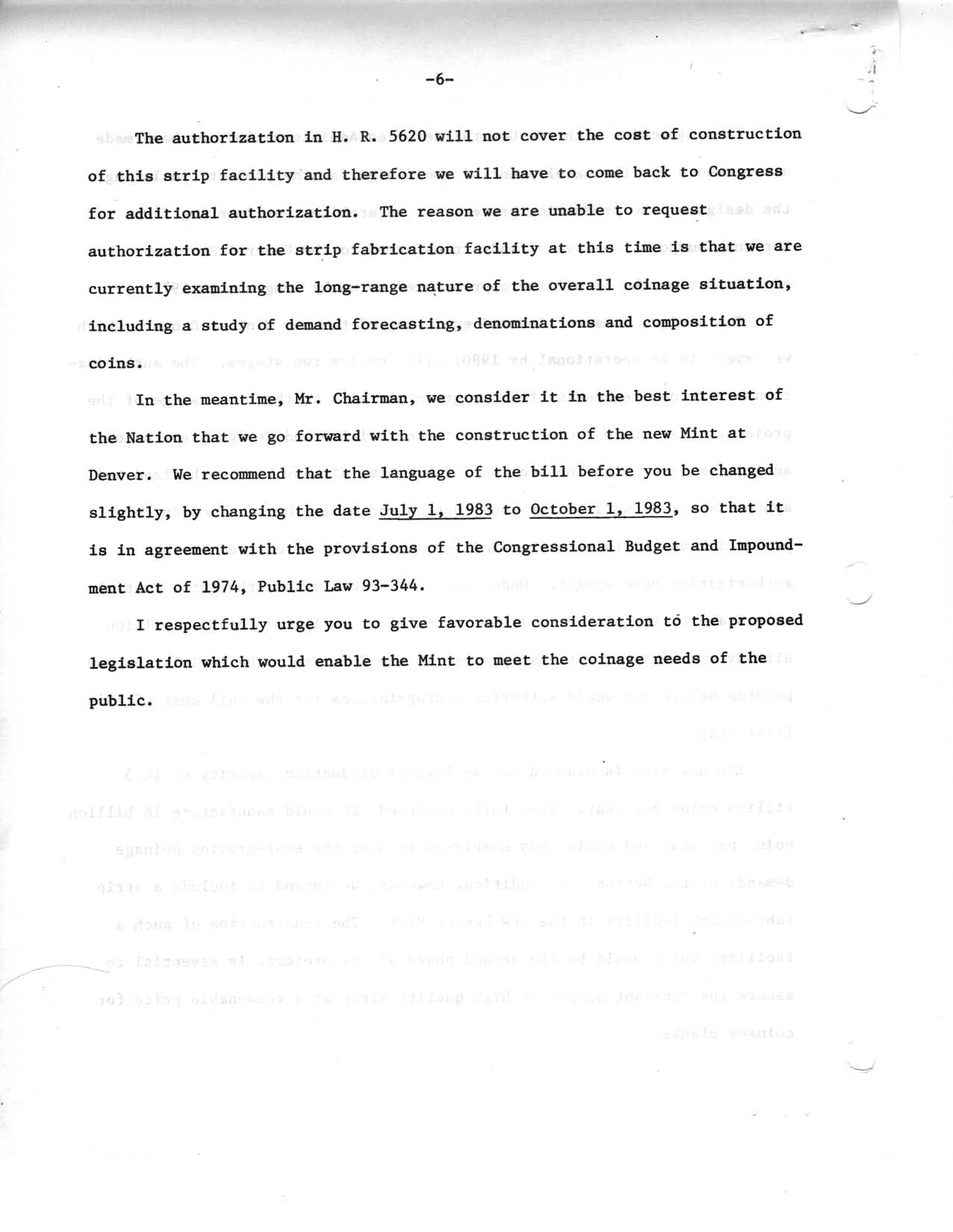 Mr. Chairman and Members of the Subcommittee, I welcome the opportunity to appear before you in support of proposed legislation which would enable the construction of a new Mint at Denver, Colorado. Specifically, the bill before your Subcommittee, H.R. 5620, would amend legislation enacted by Congress in 1963 which authorized the Secretary of the Treasury, acting through the Administrator of General Services, to acquire sites for, and to construct and equip, such buildings as may be necessary in connection with the operations of the Bureau of the Mint. The bill before your Subcommittee would amend that Act to authorize an increase of $60 million in the amount of money that can be appropriated to the Treasury Department for the construction of Mint facilities. This would raise the total authorized by Congress since 1963 for Mint construction to $105 million. The expenditure of the additional $60 million authorized by the bill would be spread over a four-year period extending through fiscal year 1979. In addition, the bill would extend the time during which the funds so authorized could be appropriated from July 1, 1973 to July 1, 1983.

Although the proposed bill would authorize expenditures for general construction and equipment requirements of the Mint, its primary objective is to permit us to go forward with the construction of a new facility in the Denver area. At the present time, four Mint facilities produce coinage for the entire Nation. These are the new Mint at Philadelphia, which began operations in August 1969; the San Francisco Assay Office, which was brought back into production in the fall of 1966; the Denver Mint, which was built around the turn of the century; and a temporary operation at the West Point Silver Depository. It has been clear to the Treasury Department for about ten years now that the Nation’s increasing coinage needs would, at the minimum, require an expansion and modernization of the outmoded production facilities of the Denver Mint. This need was brought to the attention of the Congress, which in the 1966 Supplemental Appropriation Act, designated $100,000 to develop plans for cladding capability and for related construction at the existing Denver Mint. However, a study undertaken by a private architect-engineering firm recommended that, instead of expanding the present Denver facility, construction of a new Mint on a new site was the optimum plan in order to bring the Denver facility to a production capability sufficient to meet growing coinage needs.

The national coinage demand, according to our most recent forecasts, is estimated to rise to 18 billion coins per year by 1980, from the present 12 billion coins per year. As you well know, Mr. Chairman, we are now producing the new bicentennial design quarters, half-dollars and dollars to be issued after July 4, 1975. The anticipated demand by collectors for these bicentennial pieces, together with increasing commercial demand for coinage, will reach a point by 1977 or 1978 where the need for coinage could exceed our current production capability. With existing facilities, we can produce only about 13 billion pieces per year by working three shifts at full capacity. Thus, well before the new Mint is completed, we will need to take action to increase our current productivity by installing additional equipment in our present facilities.

The plan to replace the Old Mint at Denver was presented to the Congress in 1971. In its fiscal year 1972 budget, the Department included $1.5 million for the acquisition of the new Mint site. The Congress agreed with the need for a new facility and appropriated the requested amount. For fiscal year 1973, the Congress appropriated an additional $2 million to enable the Mint to enter into a contract for architectural and engineering services, necessary to permit the construction and equipping of the new facility in a timely manner. Both of these appropriations were made under the authority of the 1963 Mint construction statute and were included in the $45 million total authorized by that law. However, as I mentioned before, Mr. Chairman, the authority contained in that Act expired on July 1, 1973. Forty million dollars appropriated by the Congress under the 1963 statute were utilized for the design and construction of the Philadelphia Mint. Of the $3.5 million so far appropriated for the new Denver Mint, only $80,000 have been expended, as we are awaiting Congressional approval of the full authorization before proceeding in irrevocable activities regarding design and construction of the new facility. Also, $1.5 million of the previous authorization was never used.

In May of 1973, we reached an agreement with the City of Denver for the acquisition of an appropriate site for the new Mint. Under the agreement, the City was to assemble an approximately thirty-three acre land-package along the South Platte River in Denver. However, because of plans of the Burlington Northern Railroad Company to relocate the main north-south railroad trackage through Denver immediately adjacent to this constricted, long, narrow site, we abandoned this proposed location and renewed our site selection actions. After a thorough and intense examination of many alternatives, carried out in cooperation with all concerned Federal, State and local entities, and after completion of clearance in accordance with the National Environmental Policy Act of 1969, a new site was selected on July 16, 1974. This site, in northeast Denver about halfway between the downtown business district and the Denver airport, is a part o the Clayton Trust Property in the Park Hill area. This is an excellent site which provides sufficient space for presently envisaged and future expansion requirements, is well-served by public transportation and utilities, is readily accessible for public visitors, and maintains the historic ties of a Mint with the City and County of Denver. As the site is on a part of an existing golf course, the City of Denver is presently rebuilding the golf course, including transplanting of trees and shrubs, on the eastern portion of the Clayton Trust Property. This eastern portion of the property is unused and grown up in weeds. The net effect will be to preserve open space and beneficial plant life in the site vicinity. We have executed an agreement with the City of Denver regarding acquisition and conveyance of the approximate thirty-four acres involved, at a cost to the Federal Government not to exceed $1.5 million. Site conveyance is scheduled presently for September 15 of this year.

In conjunction with the General Services Administration, we have made arrangements for the development of the design for the project, including the design of the production process, by an architect-engineering firm. For that purpose, we have already transferred to the General Services Administration the $2 million appropriated to us by Congress in 1973.

The design, construction and equipping of the new Mint at Denver, which we expect to be operational by 1980, will involve two stages. The authorization we are now requesting from Congress pertains to the first stage of the project. This stage includes the site acquisition and design preparation activities, for which the necessary funds have already been authorized and appropriated, as well as the construction and equipping of a modern coin production and administrative facility which would be covered by the authorization here sought. Under our current estimates, the total cost of this stage of the project will be $65 million, including the $3.5 million already appropriated for that purpose by the Congress. The legislation now pending before you would authorize the appropriations for the full cost of this first stage.

The new mint is planned for initial production capacity of 10.5 billion coins per year. When fully equipped, it could manufacture 16 billion coins per year and would thus enable us to meet the ever-growing coinage demands of the Nation. In addition, however, we intend to include a strip fabrication facility in the new Denver Mint. The construction of such a facility, which would be the second phase of the project, is essential to assure the constant supply of high quality strip at a reasonable price for coinage blanks.

The authorization in H.R. 5620 will not cover the cost of construction of this strip facility and therefore we will have to come back to Congress for additional authorization. The reason we are unable to request authorization for the strip fabrication facility at this time is that we are currently examining the long-range nature of the overall coinage situation, including a study of demand forecasting, denominations and composition of coins.

In the meantime, Mr. Chairman, we consider it in the best interest of the Nation that we go forward with the construction of a new Mint at Denver. We recommend that the language of the bill before you be changed slightly, by changing the date July 1, 1983 to October 1, 1983, so that it is in agreement with the provisions of the Congressional Budget and Impoundment Act of 1974, Public Law 93-344.

I respectfully urge you to give favorable consideration to the proposed legislation which would enable the Mint to meet the coinage needs of the public.