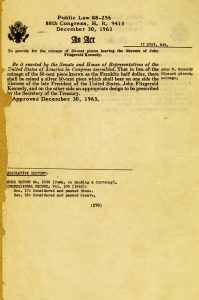 77 STAT. 83. An Act To provide for the coinage of 50-cent pieces bearing the likeness of John Fitzgerald Kennedy.

Be it enacted by the Senate and House of Representatives of the United States of America in Congress assembled, That in lieu of the coinage of the 50-cent piece known as the Franklin half dollar, there shall be coined a silver 50-cent piece which shall bear on one side the likeness of the late President of the United States, John Fitzgerald Kennedy, and on the other side an appropriate design to be prescribed by the Secretary of the Treasury.