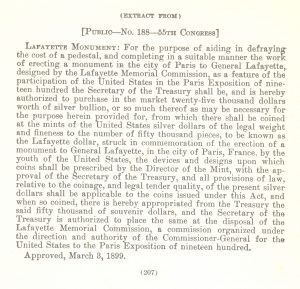 LAFAYETTE MONUMENT: For the purpose of aiding in defraying the cost of a pedestal, and completing in a suitable manner the work of erecting a monument in the city of Paris to General Lafayette, designed by the Lafayette Memorial Commission, as a feature of the participation of the United States in the Paris Exposition of nineteen hundred the Secretary of the Treasury shall be, and is hereby authorized to purchase in the market twenty-five thousand dollars worth of silver bullion, or so much thereof as may be necessary for the purpose herein provided for, from which there shall be coined at the mints of the United States silver dollars of the legal weight and fineness to the number of fifty thousand pieces, to be known as the Lafayette dollar, struck in commemoration of the erection of a monument to General Lafayette, in the city of Paris, France, by the youth of the United States, the devices and designs upon which coins shall be prescribed by the Director of the Mint, with the approval of the Secretary of the Treasury, and all provisions of law, relative to the coinage, and legal tender quality, of the present silver dollars shall be applicable to the coins issued under this Act, and when so coined, there is hereby appropriated from the Treasury the said fifty thousand of souvenir dollars, and the Secretary of the Treasury is authorized to place the same at the disposal of the Lafayette Memorial Commission, a commission organized under the direction and authority of the Commissioner-General for the United States to the Paris Exposition of nineteen hundred.