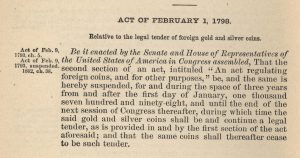 Relative to the legal tender of foreign gold and silver coins.

Be it enacted by the Senate and House of Representatives of the United States of America in Congress assembled, That the second section of an act, entitled “An act regulating foreign coins, and for other purposes¹,” be, and the same is hereby suspended, for and during the space of three years from and after the first day of January, one thousand seven hundred and ninety-eight, and until the end of the next session of Congress thereafter, during which time the said gold and silver coins shall be and continue a legal tender, as is provided in and by the first section of the act aforesaid; and that the same coins shall thereafter cease to be such tender.