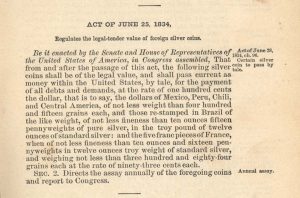 Be it enacted by the Senate and House of Representatives of the United States of America in Congress assembled, That from and after the passage of this act, the following silver coins shall be of the legal value, and shall pass current as money within the United States, by tale, for the payment of all debts and demands, at the rate of one hundred cents the dollar, that is to say, the dollars of Mexico, Peru, Chili, and Central America, of not less weight that four hundred and fifteen grains each, and those re-stamped in Brazil of the like weight, of not less fineness than ten ounces fifteen pennyweights of pure silver, in the troy pound of twelve ounces of standard silver: and the five franc pieces of France, when of not less fineness that ten ounces and sixteen pennyweights in twelve ounces troy weight of standard silver, and weighing not less than three hundred and eighty-four grains each at the ratio of ninety-three cents each.

SEC. 2. Directs the assay annually of the foregoing coins and report to Congress.