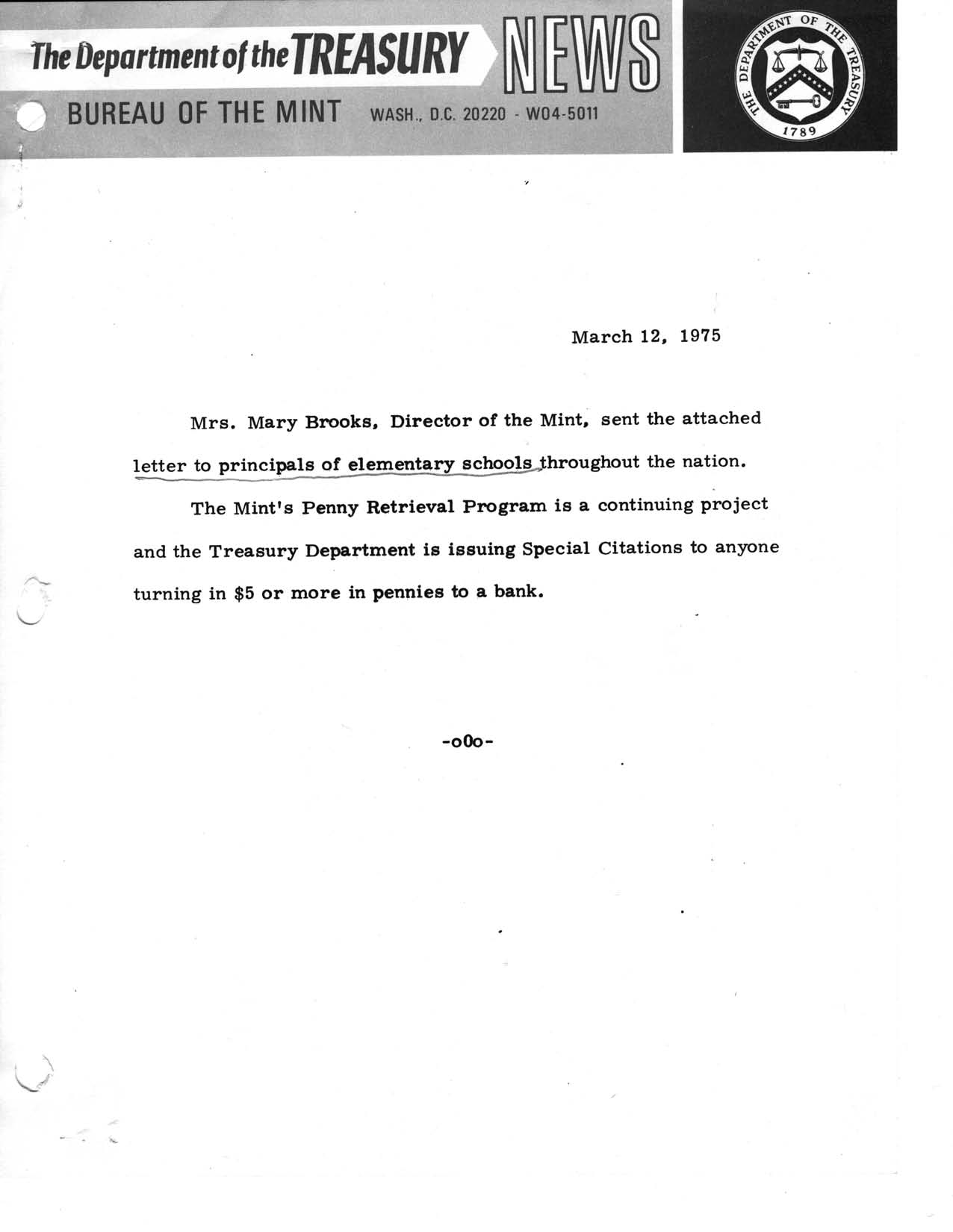 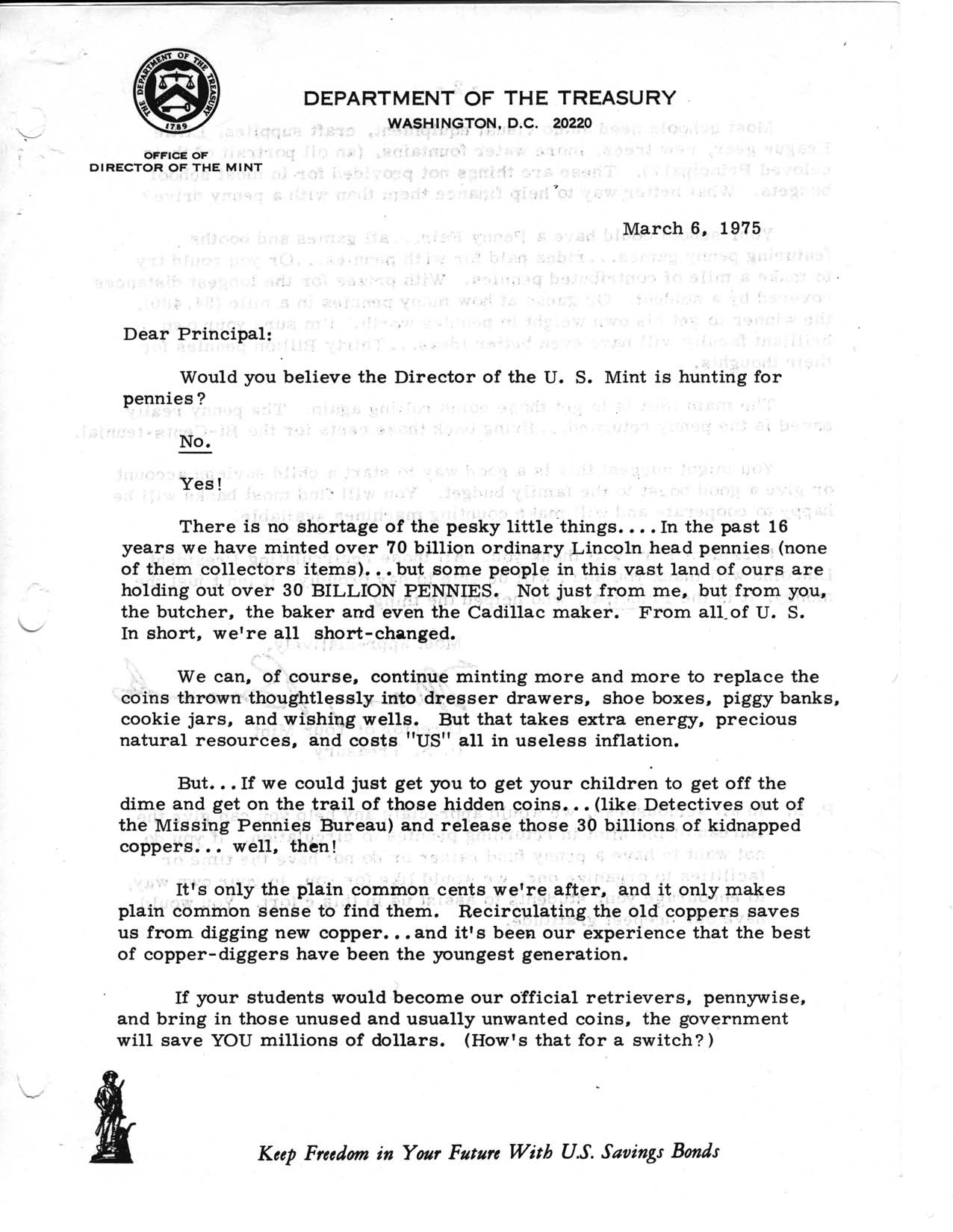 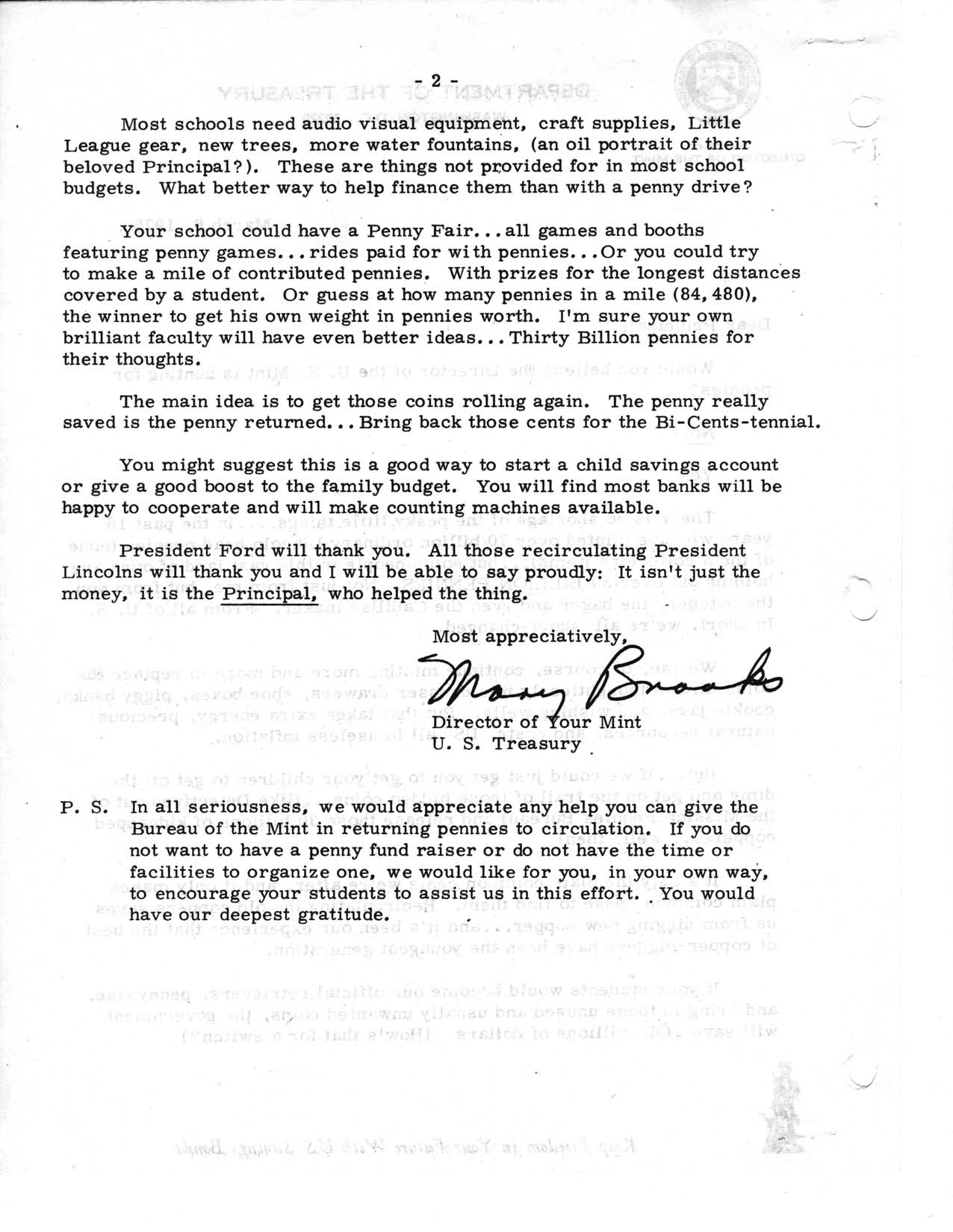 Mrs. Mary Brooks, Director of the Mint, sent the attached letter to principals of elementary schools throughout the nation.

The Mint’s Penny Retrieval Program is a continuing project and the Treasury Department is issuing Special Citations to anyone turning in $5 or more in pennies to a bank.

Would you believe the Director of the U.S. Mint is hunting for pennies?

There is no shortage of the pesky little things….In the past 16 years we have minted over 70 billion ordinary Lincoln head pennies (none of them collectors items)…but some people in this vast land of ours are holding out over 30 BILLION PENNIES. Not just from me, but from you, the butcher, the baker and even the Cadillac maker. From all of U.S. In short, we’re all short-changed.

We can, of course, continue minting more and more to replace the coins thrown thoughtlessly into dresser drawers, shoe boxes, piggy banks, cookie jars, and wishing wells. But that takes extra energy, precious natural resources, and costs “US” all in useless inflation.

But…If we could just get you to get your children to get off the dime and get on the trail of those hidden coins…(like Detectives out of the Missing Pennies Bureau) and release those 30 billions of kidnapped coppers…well, then!

It’s only the plain common cents we’re after, and it only makes plain common sense to find them. Recirculating the old coppers saves us from digging new copper…and it’s been our experience that the best of copper-diggers have been the youngest generation.

If your students would become our official retrievers, pennywise, and bring in those unused and usually unwanted coins, the government will save YOU millions of dollars. (How’s that for a switch?)

Most schools need audio visual equipment, craft supplies, Little League gear, new trees, more water fountains, (an oil portrait of their beloved Principal?). These are things not provided for in most school budgets. What better way to help finance them than with a penny drive?

Your school could have a Penny Fair…all games and booths featuring penny games…rides paid for with pennies…Or you could try to make a mile of contributed pennies. With prizes for the longest distances covered by a student. Or guess at how many pennies in a mile (84,480), the winner to get his own weight in pennies worth. I’m sure your own brilliant faculty will have even better ideas…Thirty Billion pennies for their thoughts.

The main idea is to get those coins rolling again. The penny really saved is the penny returned…Bring back those cents for the Bi-Cents-tennial.

You might suggest this is a good way to start a child savings account or give a good boost to the family budget. You will find most banks will be happy to cooperate and will make counting machines available.

President Ford will thank you. All those recirculating President Lincolns will thank you and I will be able to say proudly: It isn’t just the money, it is the Principal, who helped the thing.

[signature] Mary Brooks
Director of Your Mint
U. S. Treasury

P. S. In all seriousness, we would appreciate any help you can give the Bureau of the Mint in returning pennies to circulation. If you do not want to have a penny fund raiser or do not have the time or facilities to organize one, we would like for you, in your own way, to encourage your students to assist us in this effort. You would have our deepest gratitude.