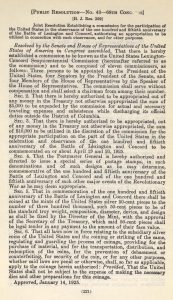 Joint Resolution Establishing a commission for the participation of the United States in the observance of the one hundred and fiftieth anniversary of the Battle of Lexington and Concord, authorizing an appropriation to be utilized in connection with such observance, and for other purposes.

SEC. 2. That there is hereby authorized to be appropriated out of any money in the Treasury not otherwise appropriated the sum of $5,000 to be expended by the commission for actual and necessary traveling expenses and subsistence while discharging its official duties outside the District of Columbia.

SEC. 3. That there is hereby authorized to be appropriated, out of any money in the Treasury not otherwise appropriated, the sum of $10,000 to be utilized in the discretion of the commission for the appropriate participation on the part of the United States in the celebration and observance of the one hundred and fiftieth anniversary of the Battle of Lexington and Concord to be commemorated on or about April 19 and 20, 1925.

SEC. 5. That in commemoration of the one hundred and fiftieth anniversary of the Battle of Lexington and Concord there shall be coined at the mints of the United States silver 50-cent pieces to the number of three hundred thousand, such 50-cent pieces to be of the standard troy weight, composition, diameter, device, and design as shall be fixed by the Director of the Mint, with the approval of the Secretary of the Treasury, which said 50-cent pieces shall be legal tender in any payment to the amount of their face value.

SEC. 6. That all laws now in force relating to the subsidiary silver coins of the United States and the coining or striking of the same, regulating and guarding the process of coinage, providing for the purchase of material, and for the transportation, distribution, and redemption of the coins, for the prevention of debasement or counterfeiting, for security of the coin, or for any other purposes, whether said laws are penal or otherwise, shall, so far as applicable, apply to the coinage herein authorized : Provided, That the United States shall not be subject to the expense of making the necessary dies and other preparations for this coinage.