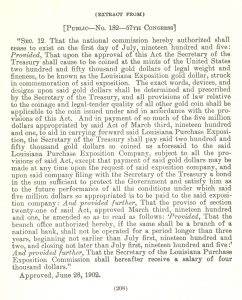 SEC. 12. That the national commission hereby authorized shall cease to exist on the first day of July, nineteen hundred and five: Provided, That upon the approval of this Act the Secretary of the Treasury shall cause to be coined at the mints of the United States two hundred and fifty thousand gold dollars of legal weight and fineness, to be known as the Louisiana Exposition gold dollar, struck in commemoration of said exposition. The exact words, devices, and designs upon said gold dollars shall be determined and prescribed by the Secretary of the Treasury, and all provisions of law relative to the coinage and legal-tender quality of all other gold coin shall be applicable to the coin issued under and in accordance with the provisions of this Act. And in payment of so much of the five million dollars appropriated by said Act of March third, nineteen hundred and one, to aid in carrying forward said Louisiana Purchase Exposition, the Secretary of the Treasury shall pay said two hundred and fifty thousand gold dollars so coined as aforesaid to the said Louisiana Purchase Exposition Company, subject to all the provisions of said Act, except that payment of said gold dollars may be made at any time upon the request of said exposition company, and upon said company filing with the Secretary of the Treasury a bond in the sum sufficient to protect the Government and satisfy him as to the future performance of all the conditions under which said five million dollars so appropriated is to be paid to the said exposition company: And provided further, That the proviso of section twenty-one of said Act, approved March third, nineteen hundred and one, be amended so as to read as follows: ‘Provided, That the branch office authorized hereby, if the same shall be a branch of a national bank, shall not be operated for a period longer than three years, beginning not earlier than July first, nineteen hundred and five:’ And provided further, That the Secretary of the Louisiana Purchase Exposition Commission shall hereafter receive a salary of four thousand dollars.