Remarks by the Honorable Mary Brooks, Director of the Mint at a Ceremony on the Issuance of a United States Postage Stamp Commemorating the 50th Anniversary of Women’s Suffrage 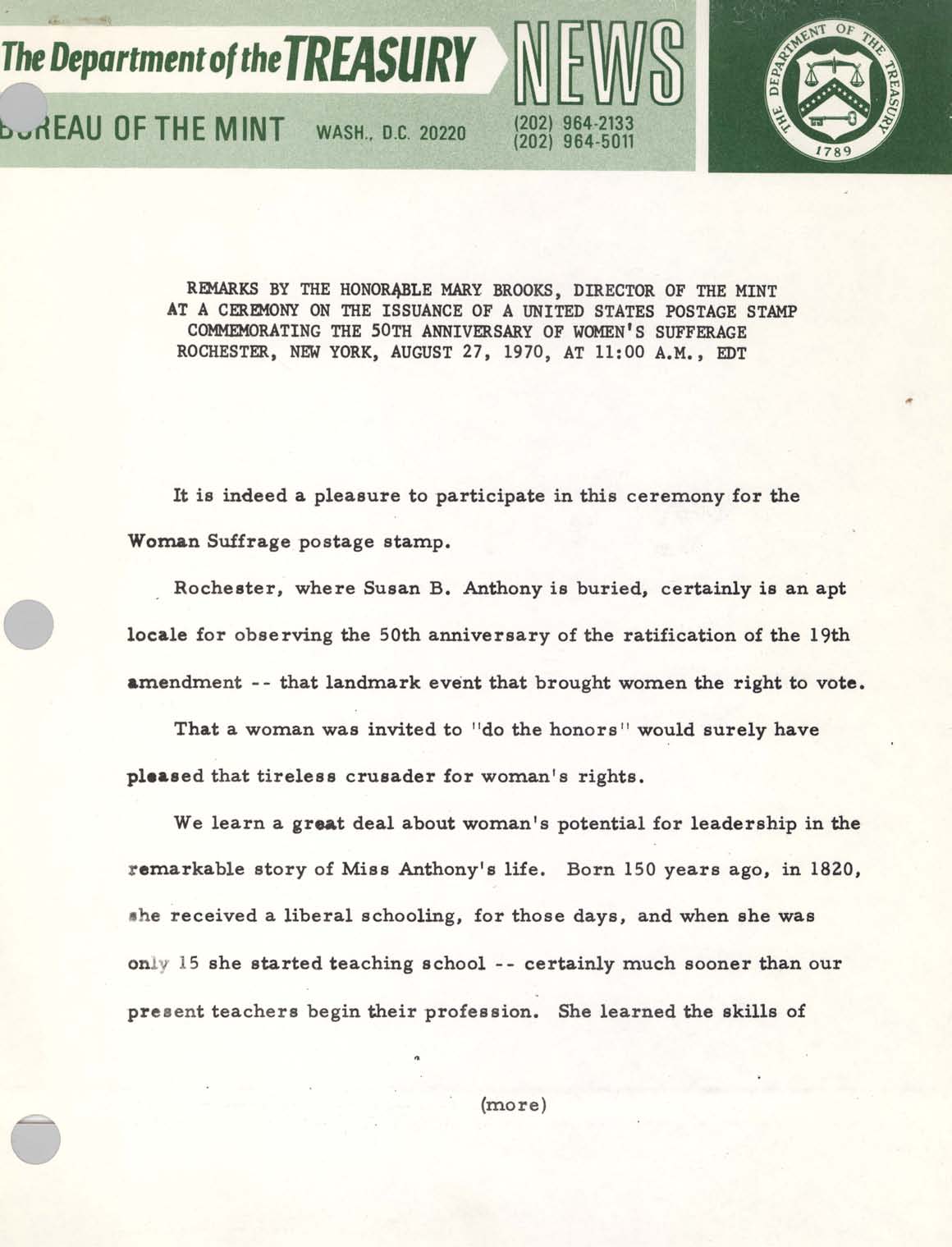 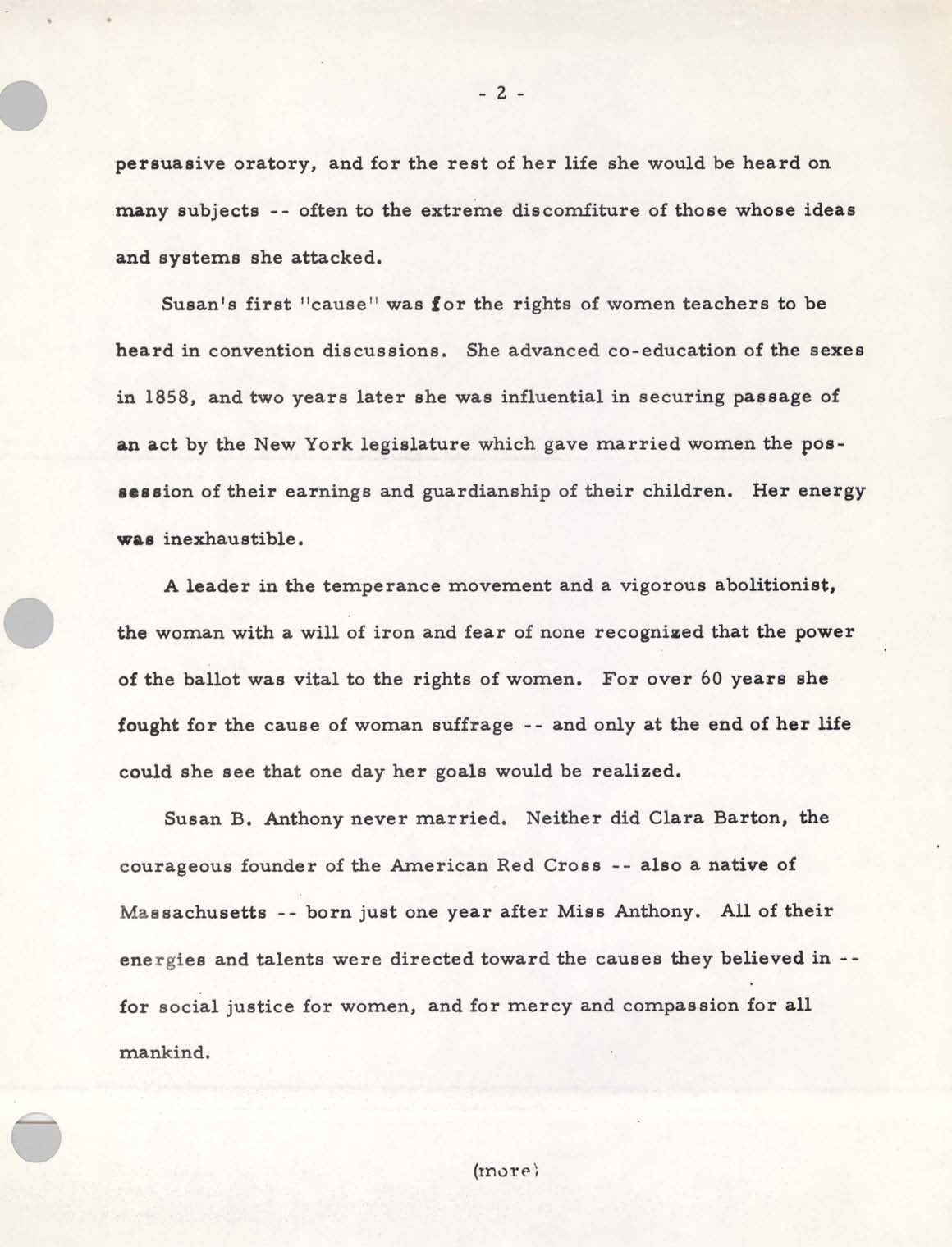 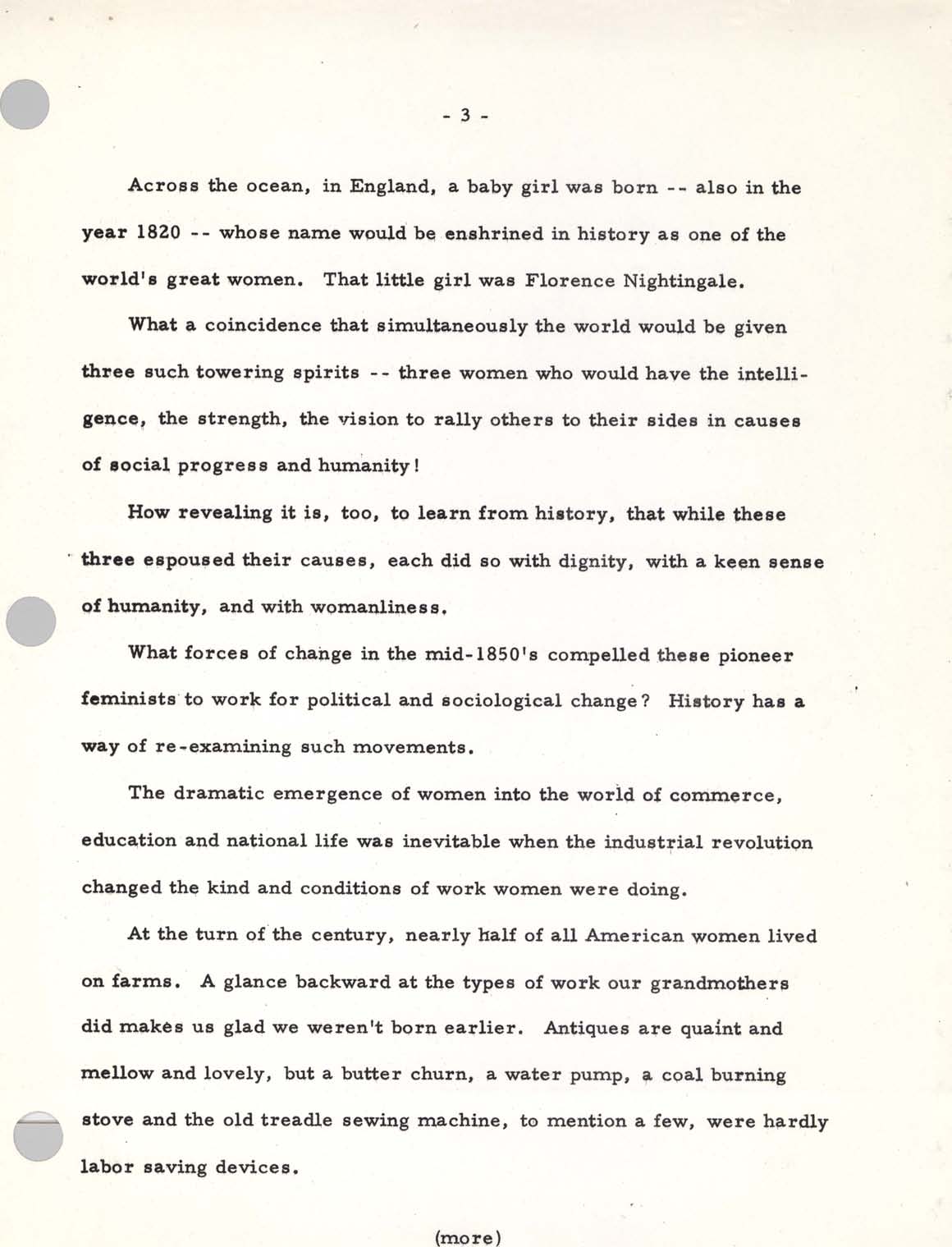 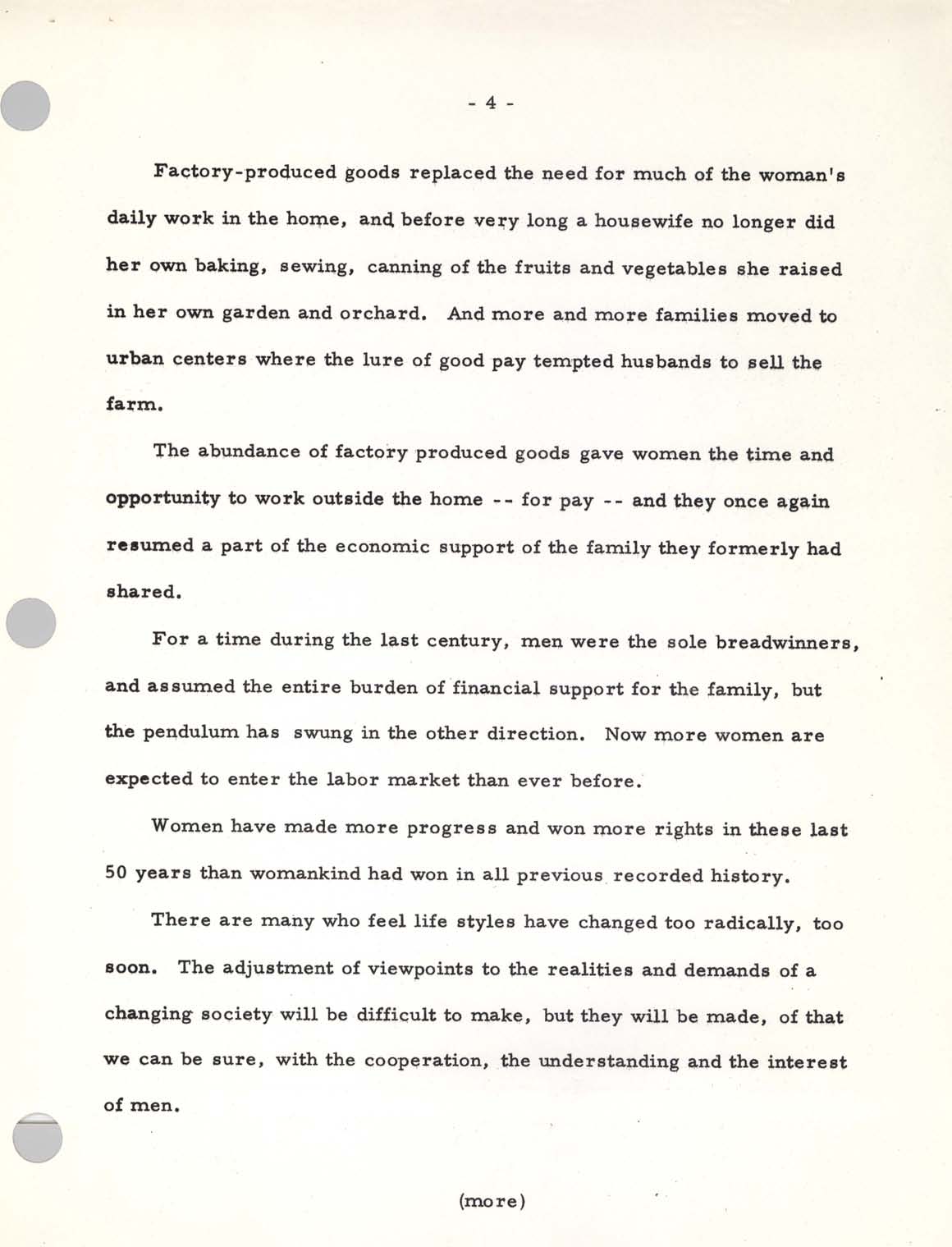 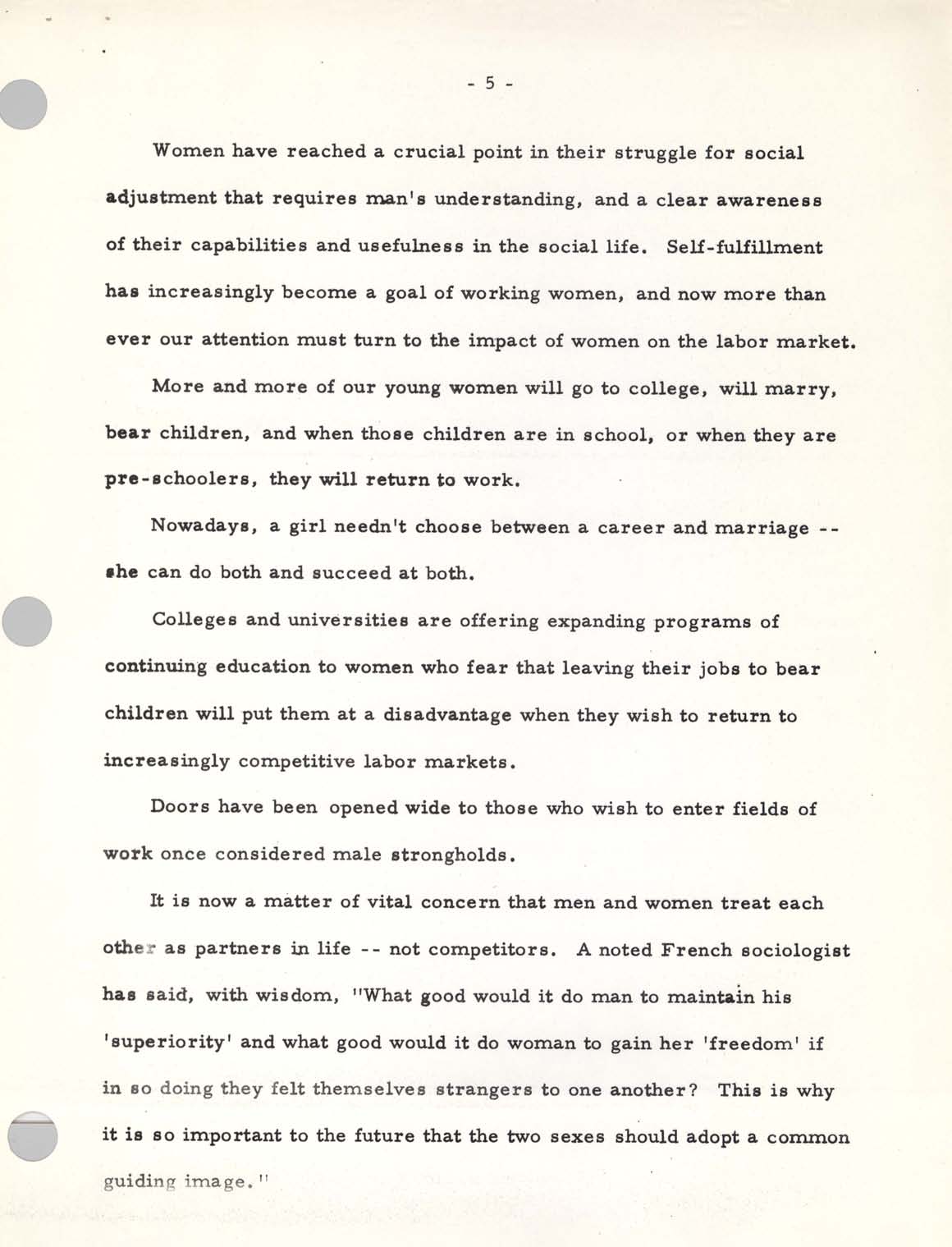 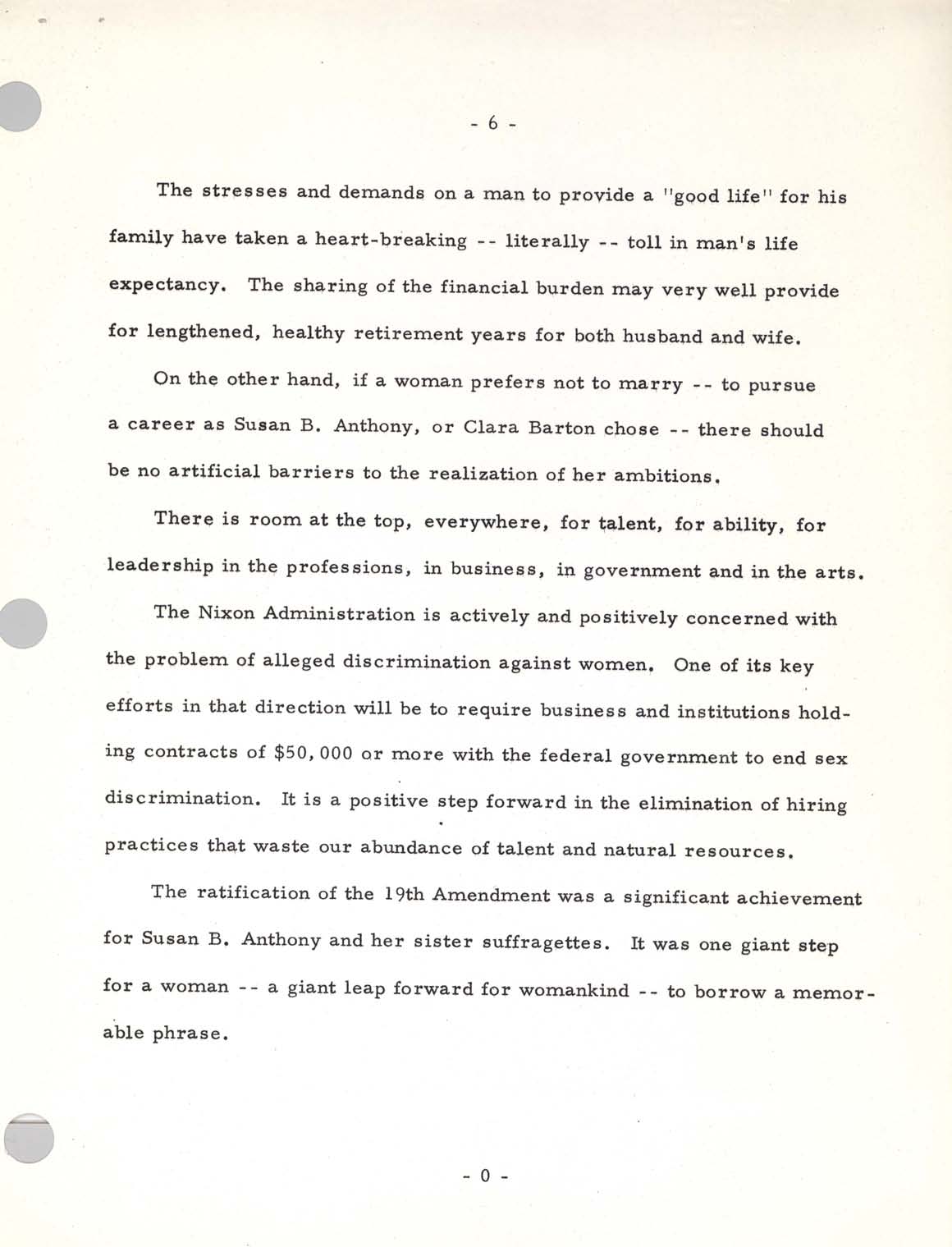 It is indeed a pleasure to participate in this ceremony for the Woman Suffrage postage stamp.

Rochester, where Susan B. Anthony is buried, certainly is an apt locale for observing the 50th anniversary of the ratification of the 19th amendment — that landmark event that brought women the right to vote.

That a woman was invited to “do the honors” would surely have pleased that tireless crusader for woman’s rights.

We learn a great deal about woman’s potential for leadership in the remarkable story of Miss Anthony’s life. Born 150 years ago, in 1820, she received a liberal schooling, for those days, and when she was only 15 she started teaching school — certainly much sooner than our present teachers begin their profession. She learned the skills of persuasive oratory and for the rest of her life she would be heard on many subjects — often to the extreme discomfiture of those whose ideas and systems she attacked.

Susan’s first “cause” was for the rights of women teachers to be heard in convention discussions. She advanced co-education of the sexes in 1858, and two years later she was influential in securing passage of an act by the New York legislature which gave married women the possession of their earnings and guardianship of their children. Her energy was inexhaustible.

A leader in the temperance movement and a vigorous abolitionist, the woman with a will of iron and fear of none recognized that the power of the ballot was vital to the rights of women. For over 60 years she fought for the cause of woman suffrage — and only at the end of her life could she see that one day her goals would be realized.

Susan B. Anthony never married. Neither did Clara Barton, the courageous founder of the American Red Cross — also a native of Massachusetts — born just one year after Miss Anthony. All of their energies and talents were directed toward the causes they believed in — for social justice for women, and for mercy and compassion for all mankind.

Across the ocean, in England, a baby girl was born — also in the year 1820 — whose name would be enshrined in history as one of the world’s great women. That little girl was Florence Nightingale.

What a coincidence that simultaneously the world would be given three such towering spirits — three women who would have the intelligence, the strength, the vision to rally others to their sides in causes of social progress and humanity!

How revealing it is, too, to learn from history, that while these three espoused their causes, each did so with dignity, with a keen sense of humanity, and with womanliness,
What forces of change in the mid-1850’s compelled these pioneer feminists to work for political and sociological change? History has a way of re-examining such movements.

The dramatic emergence of women into the world of commerce, education and national life was inevitable when the industrial revolution changed the kind and conditions of work women were doing.

At the turn of the century, nearly half of all American women lived on farms. A glance backward at the types of work our grandmothers did make us glad we weren’t born earlier. Antiques are quaint and mellow and lovely, but a butter churn, a water pump, a coal burning stove and the old treadle sewing machine, to mention a few, were hardly labor saving devices.

Factory-produced goods replaced the need for much of the woman’s daily work in the home, and before very long a housewife no longer did her own baking, sewing, canning of the fruits and vegetables she raised in her own garden and orchard. And more and more families moved to urban centers where the lure of good pay tempted husbands to sell the farm.

The abundance of factory produced goods gave women the time and opportunity to work outside the home — for pay — and they once again resumed a part of the economic support of the family they formerly had shared.

For a time during the last century, men were the sole breadwinners, and assumed the entire burden of financial support for the family, but the pendulum has swung in the other Women have made more progress and won more rights in these last 50 years than womankind had won in all previous recorded history.

There are many who feel life styles have changed too radically, too soon. The adjustment of viewpoints to the realities and demands of changing a society will be difficult to make, but they will be made, of that we can be sure, with the cooperation, the understanding and the interest of men.

Women have reached a crucial point in their struggle for social adjustment that requires man’s understanding, and a clear awareness of their capabilities and usefulness in the social life. Self-fulfillment has increasingly become a goal of working women, and now more than ever our attention must turn to the impact of women on the labor market.

More and more of our young women will go to college, will marry, bear children, and when those children are in school, or when they are pre-schoolers, they will return work.

Nowadays, a girl needn’t choose between a career and marriage — she can do both and succeed at both.

Colleges and universities are offering expanding programs of continuing education to women who fear that leaving their jobs to bear children will put them at a disadvantage when they wish to return to increasingly competitive labor markets.

Doors have been opened wide to those who wish to enter fields of work once considered male strongholds.

It is now a matter of vital concern that men and women treat each other as partners in life — not competitors. A noted French sociologist has said, with wisdom, “What good would it do man to maintain his ‘superiority’ and what good would it do woman to gain her ‘freedom’ if in so doing they felt themselves strangers to one another? This is why it is so important to the future that the two sexes should adopt a common guiding image.”

The stresses and demands on a man to provide a “good life” for his family have taken a heart-breaking — literally — toll in man’s life expectancy. The sharing of the financial burden may very well provide for lengthened, healthy retirement years for both husband and wife.

On the other hand, if a woman prefers not to marry — to pursue a career as Susan B. Anthony, or Clara Barton chose — there should be no artificial barriers to the realization of her ambitions.

There is room at the top, everywhere, for talent, for ability, for leadership in the professions, in business, in government and in the arts.

The Nixon Administration is actively and positively concerned with the problem of alleged discrimination against women. One of its key efforts in that direction will be to require business and institutions holding contracts of $50,000 or more with the federal government to end sex discrimination. It is a positive step forward in the elimination of hiring practices that waste our abundance of talent and natural resources.

The ratification of the 19th Amendment was a significant achievement for Susan B. Anthony and her sister suffragettes. It was one giant step for a woman — a giant leap forward for womankind — to borrow a memorable phrase.