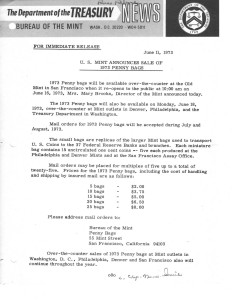 1973 Penny bags will be available over-the-counter at the Old Mint in San Francisco when it re-opens to the public at 10:00 am on June 16, 1973, Mrs. Mary Brooks, Director of the Mint announced today.

The 1973 Penny bags will also be available on Monday, June 18, 1973, over-the-counter at Mint outlets in Denver, Philadelphia, and the Treasury Department in Washington.

Mail orders for the 1973 Penny bags will be accepted during July and August, 1973.

The small bags are replicas of the larger Mint bags used to transport U.S. Coins to the 37 Federal Reserve Banks and branches. Each miniature bag contain 15 uncirculated one cent coins—five each produced at the Philadelphia and Denver Mints and at the San Francisco Assay Office.

Mail orders may be placed for multiples of five up to a total of twenty-five. Prices for the 1973 Penny bags, including the cost of handling and shipping by insured mail are as follows:

Over-the-counter sales of 1973 Penny bags at Mint outlets in Washington, D.C., Philadelphia, Denver and San Francisco also will continue throughout the year.