Mint Appeals for Return of the Penny 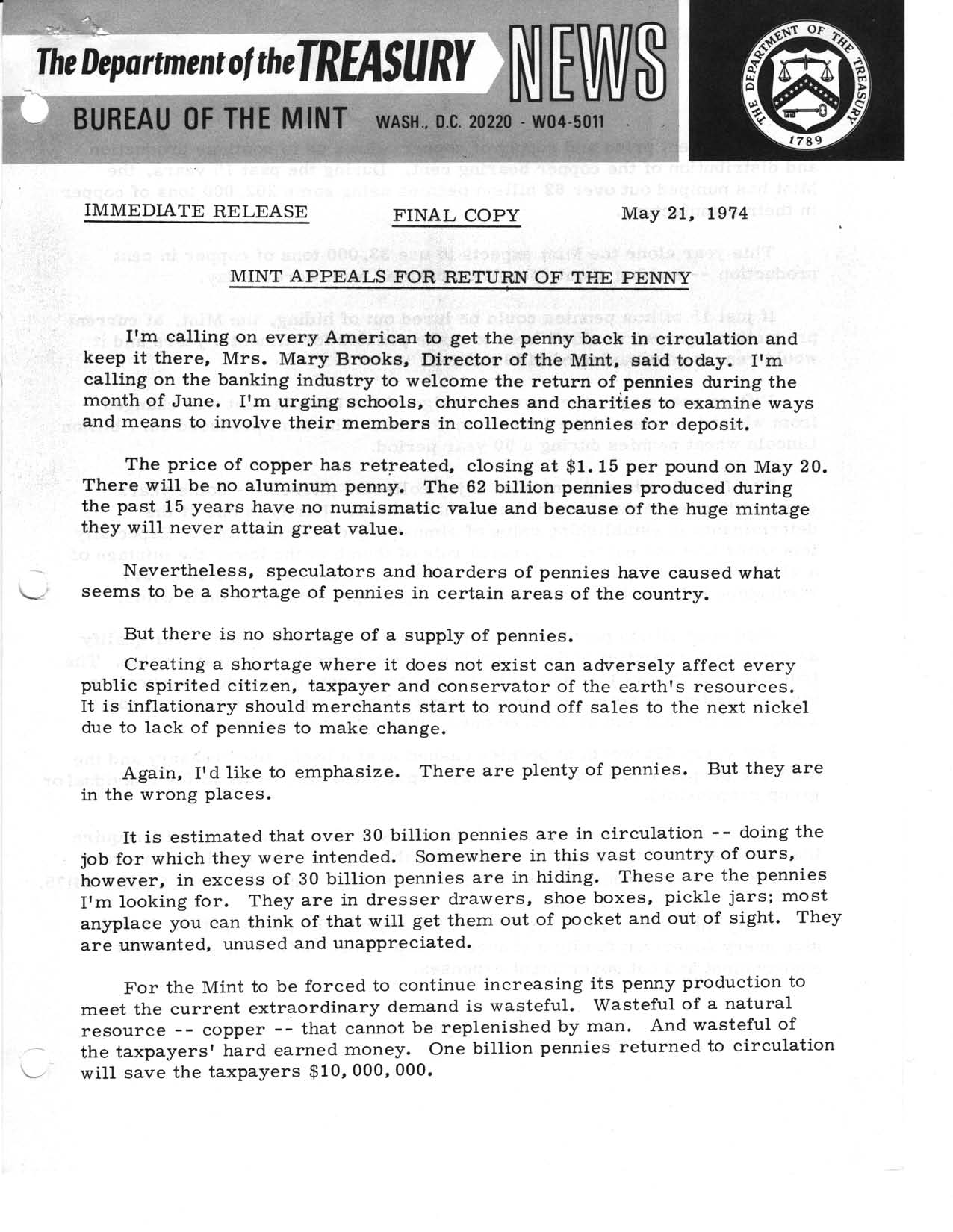 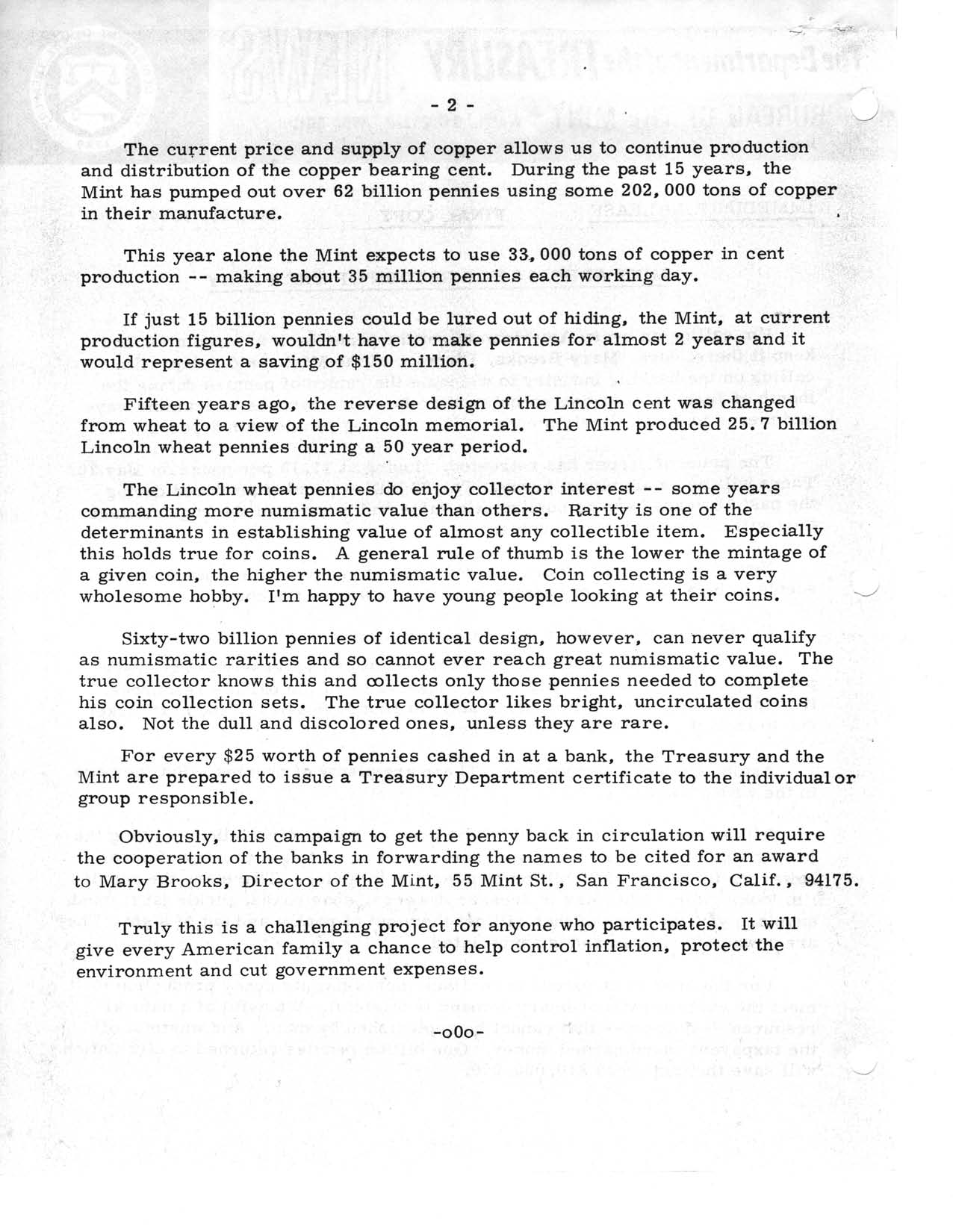 I’m calling on every American to get the penny back in circulation and keep it there, Mrs. Mary Brooks, Director of the Mint, said today. I’m calling on the banking industry to welcome the return of pennies during the month of June. I’m urging schools, churches and charities to examine ways and means to involve their members in collecting pennies for deposit.

The price of copper has retreated, closing at $1.15 per pound on May 20. There will be no aluminum penny. The 62 billion pennies produced during the past 15 years have no numismatic value and because of the huge mintage they will never attain great value.

Nevertheless, speculators and hoarders of pennies have caused what seems to be a shortage of pennies in certain areas of the country.

But there is no shortage of a supply of pennies.

Creating a shortage where it does not exist can adversely affect every public spirited citizen, taxpayer and conservator of the earth’s resources. It is inflationary should merchants start to round off sales to the next nickel due to lack of pennies to make change.

Again, I’d like to emphasize. There are plenty of pennies. But they are in the wrong places.

It is estimated that over 30 billion pennies are in circulation—doing the job for which they were intended. Somewhere in this vast country of ours, however, in excess of 30 billion pennies are in hiding. These are the pennies I’m looking for. They are in dresser drawers, shoe boxes, pickle jars; most anyplace you can think of that will get them out of pocket and out of sight. They are unwanted, unused and unappreciated.

For the Mint to be forced to continue increasing its penny production to meet the current extraordinary demand is wasteful. Wasteful of a natural resource—copper—that cannot be replenished by man. And wasteful of the taxpayers’ hard earned money. One billion pennies returned to circulation will save the taxpayers $10,000,000.

The current price and supply of copper allows us to continue production and distribution of the copper bearing cent. During the past 15 years, the Mint has pumped out over 62 billion pennies using some 202,000 tons of copper in their manufacture.

This year alone the Mint expects to use 33,000 tons of copper in cent production—making about 35 million pennies each working day.

If just 15 billion pennies could be lured out of hiding, the Mint, at current production figures, wouldn’t have to make pennies for almost 2 years and it would represent a saving of $150 million.

Fifteen years ago, the reverse design of the Lincoln cent was changed from wheat to a view of the Lincoln memorial. The Mint produced 25.7 billion Lincoln wheat pennies during a 50 year period.

The Lincoln wheat pennies do enjoy collector interest—some years commanding more numismatic value than others. Rarity is one of the determinants establishing value of almost any collectible item. Especially this holds true for coins. A general rule of thumb is the lower the mintage of a given coin, the higher the numismatic value. Coin collecting is a very wholesome hobby. I’m happy to have young people looking at their coins.

Sixty-two billion pennies of identical design, however, can never qualify as numismatic rarities and so cannot ever reach great numismatic value. The true collector knows this and collects only those pennies needed to complete his coin collection sets. The true collector likes bright, uncirculated coins also. Not the dull and discolored ones, unless they are rare.

For every $25 worth of pennies cashed in at a bank, the Treasury and the Mint are prepared to issue a Treasury Department certificate to the individual or group responsible.

Obviously, this campaign to get the penny back in circulation will require the cooperation of the banks in forwarding the names to be cited for an award to Mary Brooks, Director of the Mint, 55 Mint St., San Francisco, Calif., 94175.

Truly this is a challenging project for anyone who participates. It will give every American family a chance to help control inflation, protect the environment and cut government expenses.