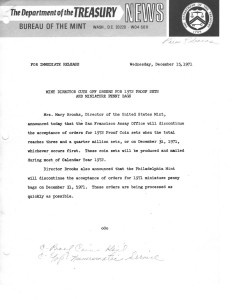 Mrs. Mary Brooks, Director of the United States Mint, announced today that the San Francisco Assay Office will discontinue the acceptance of orders for 1972 Proof Coin sets when the total reaches three and a quarter million sets, or on December 31, 1971, whichever occurs first. These coin sets will be produced and mailed during most of Calendar Year 1972.

Director Brooks also announced that the Philadelphia Mint will discontinue the acceptance of orders for the 1971 miniature penny bags on December 31, 1971. These orders are being processed as quickly as possible.