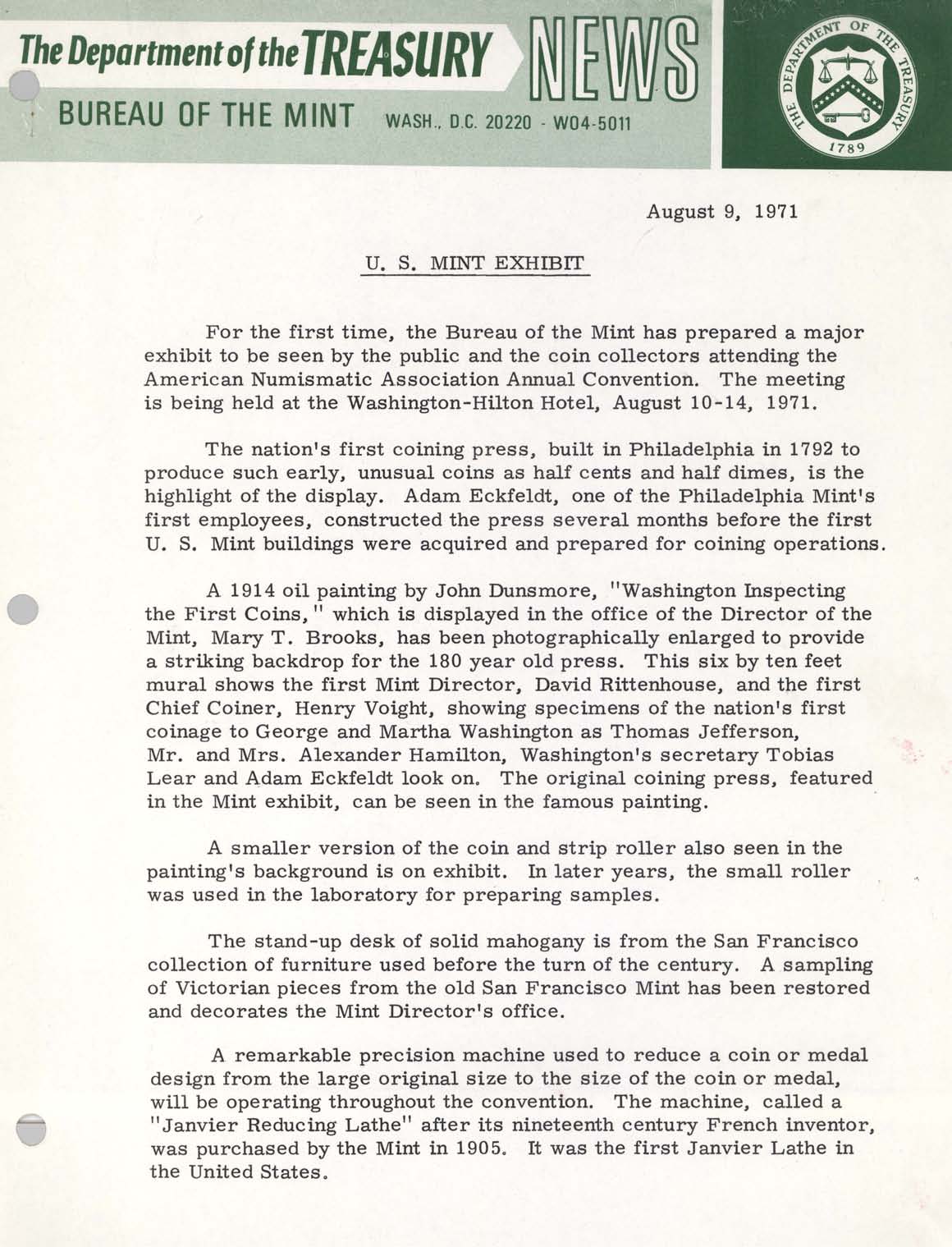 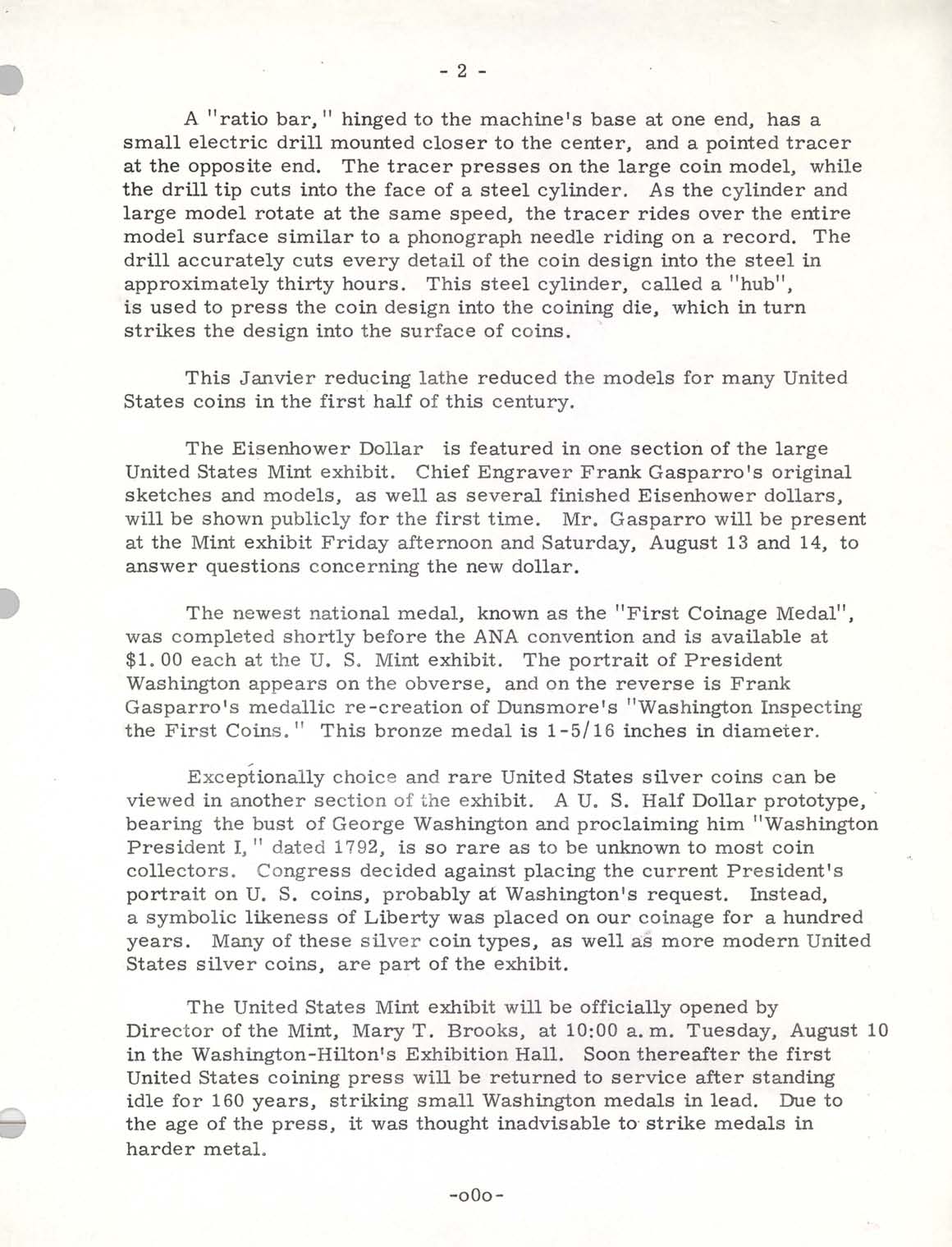 For the first time, the Bureau of the Mint has prepared a major exhibit to be seen by the public and the coin collectors attending the American Numismatic Association Annual Convention. The meeting is being held at the Washington-Hilton Hotel, August 10-14, 1971.

The nation’s first coining press, built in Philadelphia in 1792 to produce such early, unusual coins as half cents and half dimes, is the highlight of the display. Adam Eckfeldt, one of the Philadelphia Mint’s first employees, constructed the press several months before the first U.S. Mint buildings were acquired and prepared for coining operations.

A 1914 oil painting by John Dunsmore, “Washington Inspecting the First Coins,” which is displayed in the office of the Director of the Mint, Mary T. Brooks, has been photographically enlarged to provide a striking backdrop for the 180 year old press. This six by ten feet mural shows the first Mint Director, David Rittenhouse, and the first Chief Coiner, Henry Voight, showing specimens of the nation’s first coinage to George and Martha Washington as Thomas Jefferson, Mr. and Mrs. Alexander Hamilton, Washington’s secretary Tobias Lear and Adam Eckfeldt look on. The original coining press, featured in the Mint exhibit, can be seen in the famous painting.

A smaller version of the coin and strip roller also seen in the painting’s background is on exhibit. In later years, the small roller was used in the laboratory for preparing samples.

The stand-up desk of solid mahogany is from the San Francisco collection of furniture used before the turn of the century. A sampling of Victorian pieces from the old San Francisco Mint has been restored and decorates the Mint Director’s office.

A remarkable precision machine used to reduce a coin or medal design from the large original size to the size of the coin or medal, will be operating throughout the convention. The machine, called a “Janvier Reducing Lathe” after its nineteenth century French inventor, was purchased by the Mint in 1905. It was the first Janvier Lathe in the United States.

A “ratio bar,” hinged to the machine’s base at one end, has a small electric drill mounted closer to the center, and a pointed tracer at the opposite end. The tracer presses on the large coin model, while the drill tip cuts into the face of a steel cylinder. As the cylinder and large model rotate at the same speed, the tracer rides over the entire model surface similar to a phonograph needle riding on a record. The drill accurately cuts every detail of the coin design into the steel in approximately thirty hours. This steel cylinder, called a “hub”, is used to press the coin design into the coining die, which in turn strikes the design into the surface of coins.

This Janvier reducing lathe reduced the models for many United States coins in the first half of this century.

The Eisenhower Dollar is featured in one section of the large United States Mint exhibit. Chief Engraver Frank Gasparro’s original sketches and models, as well as several finished Eisenhower dollars, will be shown publicly for the first time. Mr. Gasparro will be present at the Mint exhibit Friday afternoon and Saturday, August 13 and 14, to answer questions concerning the new dollar.

The newest national medal, known as the “First Coinage Medal”, was completed shortly before the ANA convention and is available at $1.00 each at the U.S. Mint exhibit. The portrait of President Washington appears on the obverse, and on the reverse is Frank Gasparro’s medallic re-creation of Dunsmore’s “Washington Inspecting the First Coins.” This bronze medal is 1-5/16 inches in diameter.

Exceptionally choice and rare United States silver coins can be viewed in another section of the exhibit. A U.S. Half Dollar prototype, bearing the bust of George Washington and proclaiming him “Washington President I,” dated 1792, is so rare as to be unknown to most coin collectors. Congress decided against placing the current President’s portrait on U.S. coins, probably at Washington’s request. Instead, a symbolic likeness of Liberty was placed on our coinage for a hundred years. Many of these silver coin types, as well as more modern United States silver coins, are part of the exhibit.

The United States Mint exhibit will be officially opened by Director of the Mint, Mary T. Brooks, at 10:00 a.m. Tuesday, August 10 in the Washington-Hilton’s Exhibition Hall. Soon thereafter the first United States coining press will be returned to service after standing idle for 160 years, striking small Washington medals in lead. Due to the age of the press, it was thought inadvisable to strike medals in harder metal.