FOR RELEASE AT NOON, EST 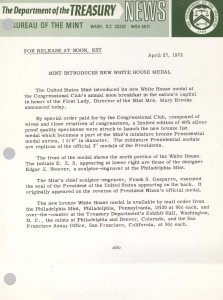 The United States Mint introduced its new White House medal at the Congressional Club’s annual noon breakfast in the nation’s capital in honor of the First Lady, Director of the Mint Mrs. Mary Brooks announced today.

By special order paid for by the Congressional Club, composed of wives and close relatives of congressmen, a limited edition of 40% silver proof quality specimens were struck to launch the new bronze list medal which becomes a part of the Mint’s miniature bronze Presidential medal series, 1 5/6″ in diameter. The miniature Presidential medals are replicas of the official 3″ medals of the Presidents.

The front of the medal shows the north portico of the White House. The initials, E. Z. S. appearing at lower right are those of the designer Edgar Z. Steever, a sculptor-engraver at the Philadelphia Mint.

The Mint’s chief sculptor-engraver, Frank S. Gasparro, executed the seal of the President of the United States appearing on the back. It originally appeared on the reverse of President Nixon’s official medal.

The new bronze White House medal is available by mail order from the Philadelphia Mint, Philadelphia, Pennsylvania, 19130 at 60¢ each, and over-the-counter at the Treasury Department’s Exhibit Hall, Washington, D.C., the mints at Philadelphia and Denver, Colorado, and the San Francisco Assay Office, San Francisco, California, at 50¢ each.