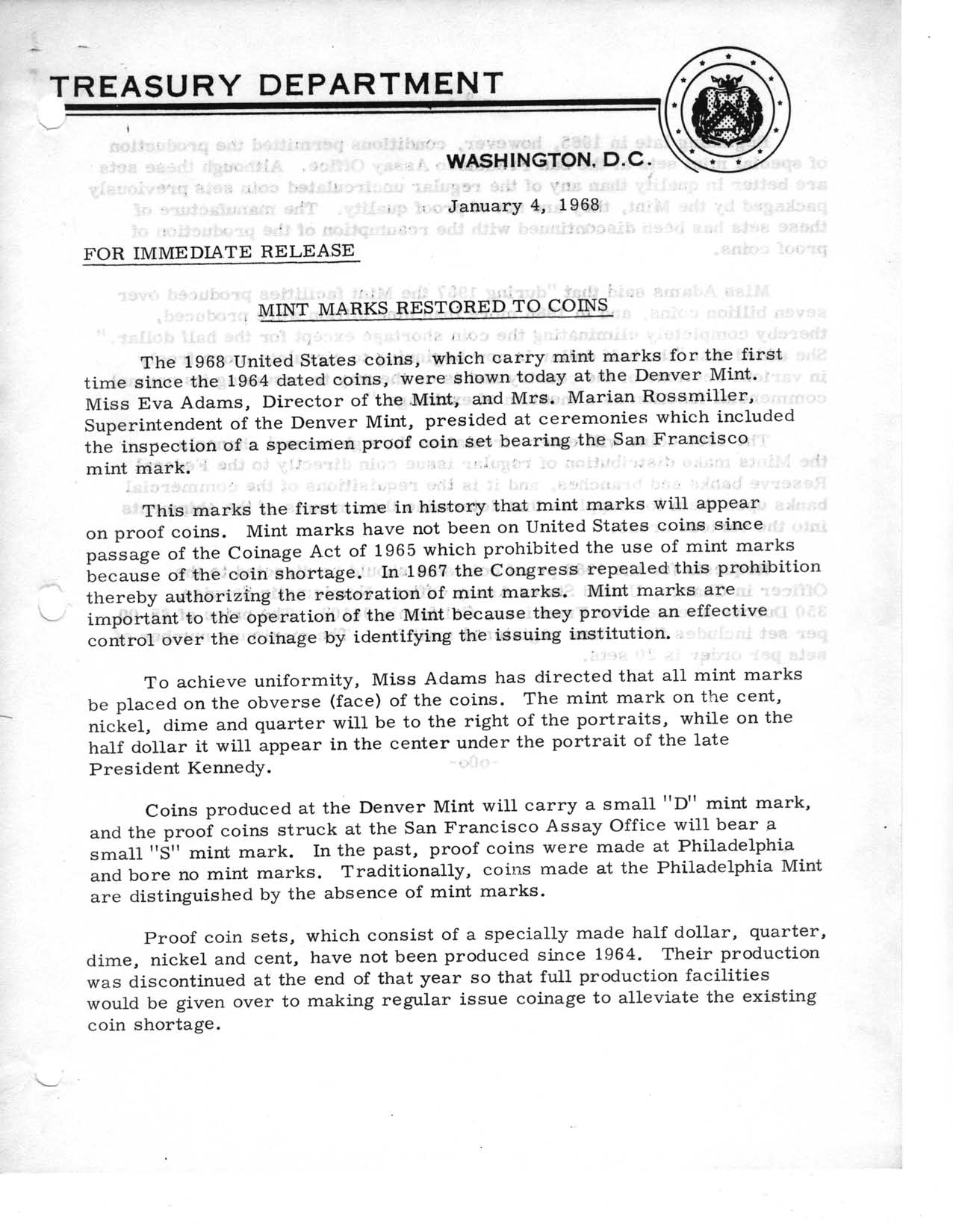 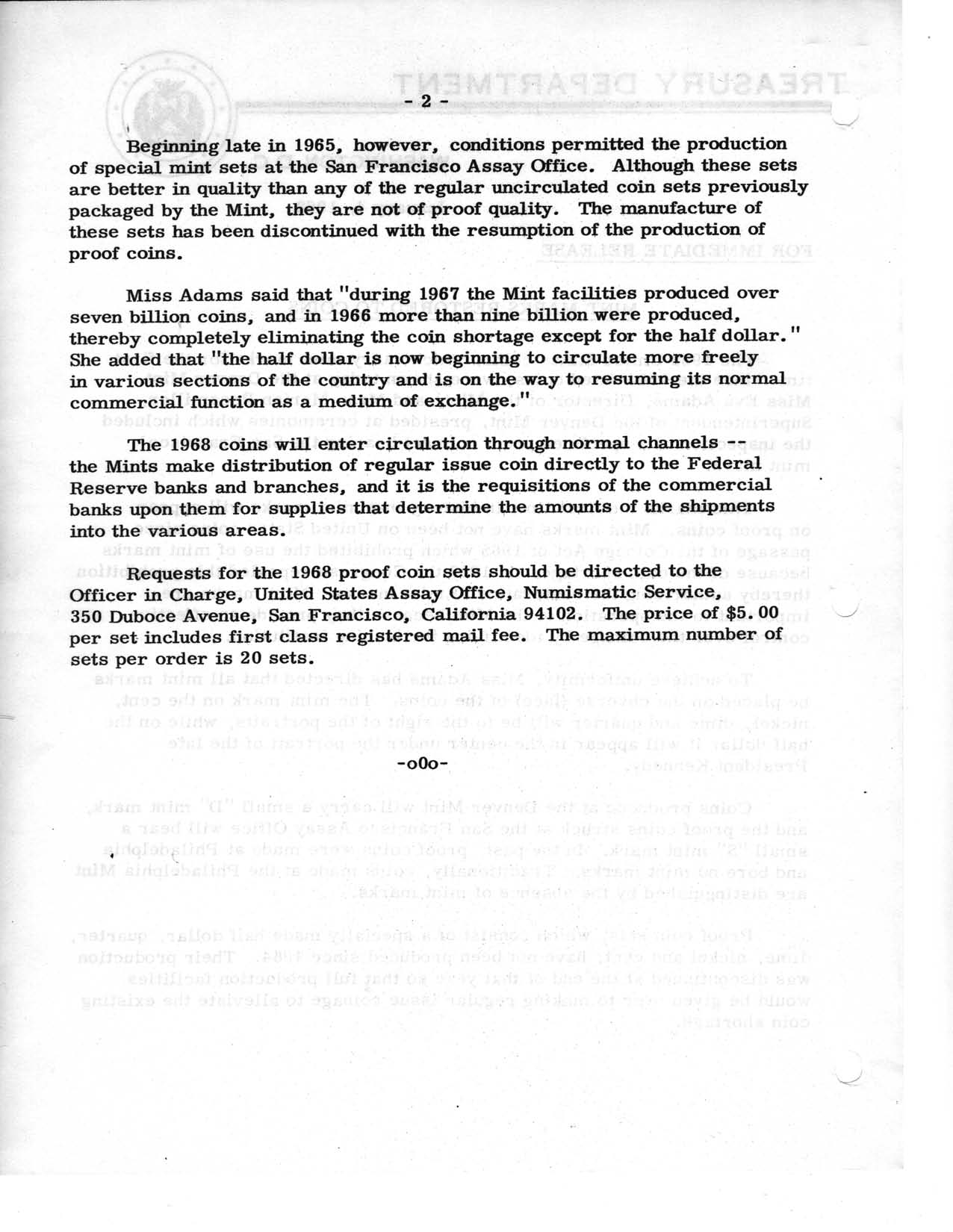 The 1968 United States coins, which carry mint marks for the first time since the 1964 dated coins, were shown today at the Denver Mint. Miss Eva Adams, Director of the Mint, and Mrs. Marian Rossmiller, Superintendent of the Denver Mint, presided at ceremonies which included the inspection of a specimen proof coin set bearing the San Francisco mint mark.

This marks the first time in history that mint marks will appear on proof coins. Mint marks have not been on United States coins since passage of the Coinage Act of 1965 which prohibited the use of mint marks because of the coin shortage. In 1967 the Congress repealed this prohibition thereby authorizing the restoration of mint marks. Mint marks are important to the operation of the Mint because they provide an effective control over the coinage by identifying the issuing institution.

To achieve uniformity, Miss Adams has directed that all mint marks be placed on the obverse (face) of the coins. The mint mark on the cent, nickel, dime and quarter will be to the right of the portraits, while on the half dollar it will appear in the center under the portrait of the late President Kennedy.

Coins produced at the Denver Mint will carry a small “D” mint mark, and the proof coins struck at the San Francisco Assay Office will bear a small “S” mint mark. In the past, proof coins were made at Philadelphia and bore no mint marks. Traditionally, coins made at the Philadelphia Mint are distinguished by the absence of mint marks.

Proof coin sets, which consist of a specially made half dollar, quarter, dime, nickel and cent, have not been produced since 1964. Their production was discontinued at the end of that year so that full production facilities would be given over to making regular issue coinage to alleviate the existing coin shortage.

Beginning late in 1965, however, conditions permitted the production of special mint sets at the San Francisco Assay Office. Although these sets are better in quality than any of the regular uncirculated coin sets previously packaged by the Mint, they are not of proof quality. The manufacture of these sets has been discontinued with the resumption of the production of proof coins.

Miss Adams said that “during 1967 the Mint facilities produced over seven billion coins, and in 1966 more than nine billion were produced, thereby completely eliminating the coin shortage except for the half dollar.” She added that “the half dollar is now beginning to circulate more freely in various sections of the country and is on the way to resuming its normal commercial function as a medium of exchange.”

The 1968 coins will enter circulation through normal channels—the Mints make distribution of regular issue coin directly to the Federal Reserve banks and branches, and it is the requisitions of the commercial banks upon them for supplies that determine the amounts of the shipments into the various areas.

Requests for the 1968 proof coin sets should be directed to the Officer in Charge, United States Assay Office, Numismatic Service, 350 Duboce Avenue, San Francisco, California 94102. The price of $5.00 per set includes first class registered mail fee. The maximum number of sets per order is 20 sets.