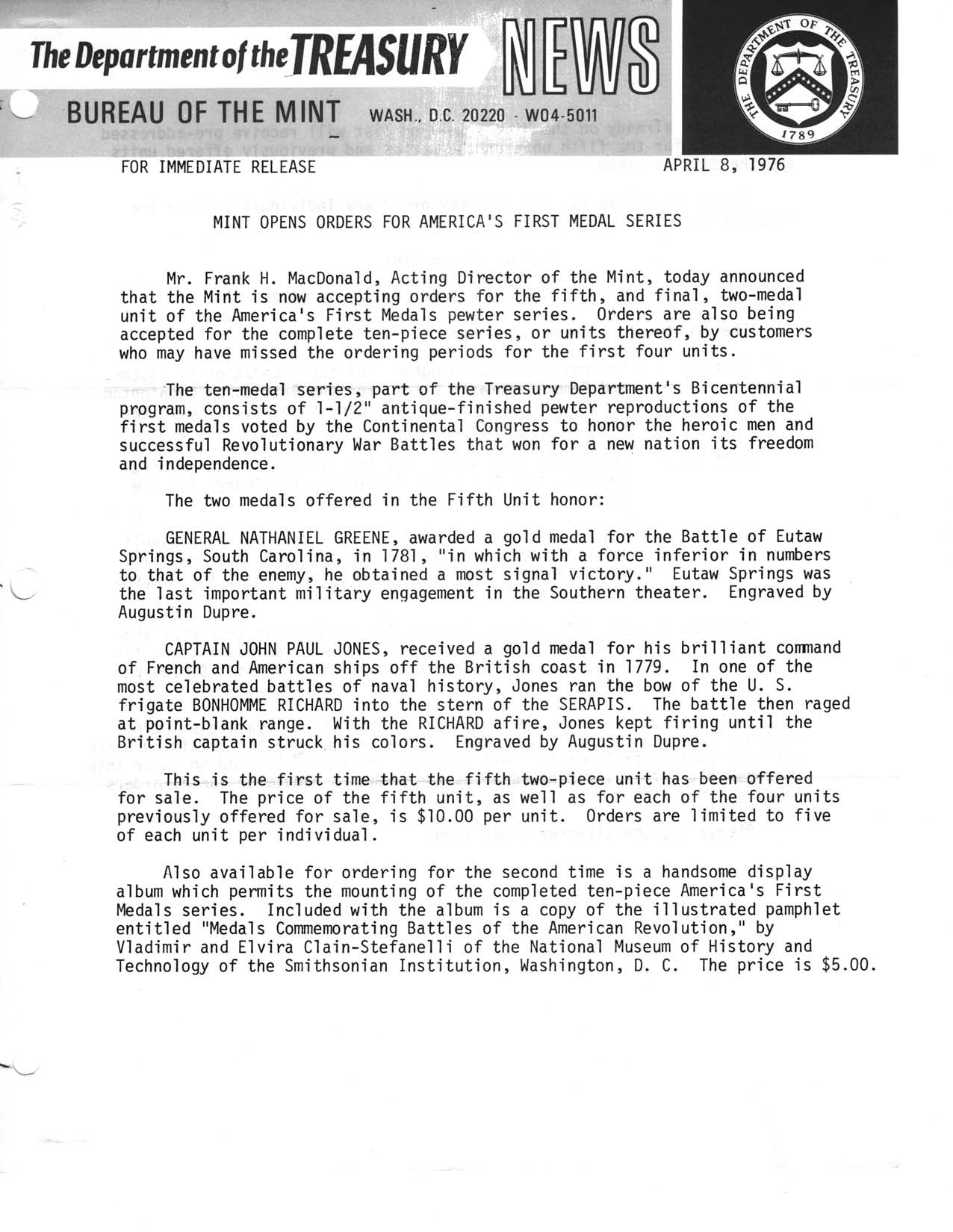 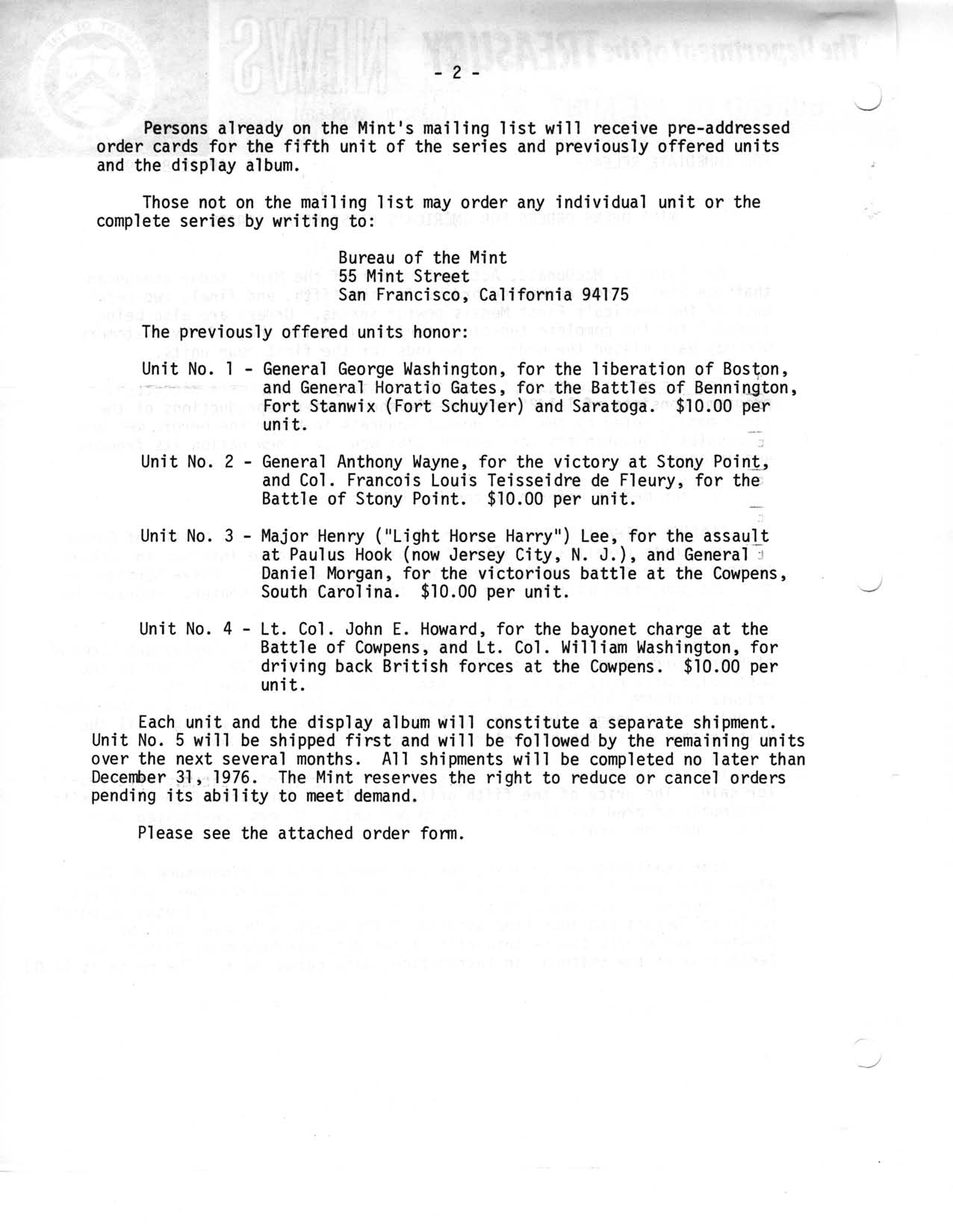 Mr. Frank H. MacDonald, Acting Director of the Mint, today announced that the Mint is now accepting orders for the fifth, and final, two-medal unit of the America’s First Medals pewter series. Orders are also being accepted for the complete ten-piece series, or units thereof, by customers who may have missed the ordering periods for the first four units.

The ten-medal series, part of the Treasury Department’s Bicentennial program, consists of 1-1/2″ antique-finished pewter reproductions of the first medals voted by the Continental Congress to honor the heroic men and successful Revolutionary War Battles that won for a new nation its freedom and independence.

The two medals offered in the Fifth Unit honor:

General Nathaniel Greene, awarded a gold medal for the Battle of Eutaw Springs, South Carolina, in 1781, “in which with a force inferior in numbers to that of the enemy, he obtained a most signal victory.” Eutaw Springs was the last important military engagement in the Southern theater. Engraved by Augustin Dupre.

Captain John Paul Jones, received a gold medal for his brilliant command of the French and American ships off the British coast in 1779. In one of the most celebrated battles of naval history, Jones ran the bow of the U.S. frigate BONHOMME RICHARD into the stern of the SERAPIS. The battle then raged at point-blank range. With the RICHARD afire, Jones kept firing until the British captain struck his colors. Engraved by Augustin Dupre.

This is the first time that the fifth two-piece unit has been offered for sale. The price of the fifth unit, as well as for each of the four units previously offered for sale, is $10.00 per unit. Orders are limited to five of each unit per individual.

Also available for ordering for the second time is a handsome display album which permits the mounting of the completed ten-piece America’s First Medals series. Included with the album is a copy of the illustrated pamphlet entitled “Medals Commemorating Battles of the American Revolution,” by Vladimir and Elvira Clain-Stefanelli of the National Museum of History and Technology of the Smithsonian Institution, Washington, D.C. The price is $5.00.

Persons already on the Mint’s mailing list will receive pre-addressed order cards for the fifth unit of the series and previously offered units and the display album.

Those not on the mailing list may order any individual unit or the complete series by writing to:

Unit No. 1 – General George Washington, for the liberation of Boston, and General Horatio Gates, for the Battles of Bennington, Fort Stanwix (Fort Schuyler) and Saratoga. $10.00 per unit.

Unit No. 2 – General Anthony Wayne, for the victory at Stony Point, and Col. Francois Louis Teisseidre de Fleury, for the Battle of Stony Point. $10.00 per unit.

Unit No. 3 – Major Henry (“Light Horse Harry”) Lee, for the assault at Paulus Hook (now Jersey City, N.J.), and General Daniel Morgan, for the victorious battle at the Cowpens, South Carolina. $10.00 per unit.

Unit No. 4 – Lt. Col. John E. Howard, for the bayonet charge at the Battle of Cowpens, and Lt. Col. William Washington, for driving back British forces at the Cowpens. $10.00 per unit.

Each unit and the display album will constitute a separate shipment. Unit No. 5 will be shipped first and will be followed by the remaining units over the next several months. All shipments will be completed no later than December 31, 1976. The Mint reserves the right to reduce or cancel orders pending its ability to meet demand.