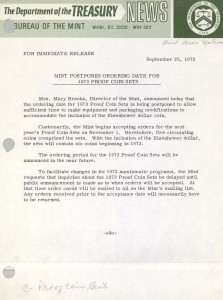 Mrs. Mary Brooks, Director of the Mint, announced today that the ordering date for 1973 Proof Coin Sets is being postponed to allow sufficient time to make equipment and packaging modifications to accommodate the inclusion of the Eisenhower dollar coin.

Customarily, the Mint begins accepting orders for the next year’s Proof Coin Sets on November 1. Heretofore, five circulating coins comprised the sets. With the inclusion of the Eisenhower dollar, the sets will contain six coins beginning in 1973.

The ordering period for the 1973 Proof Coin Sets will be announced in the near future.

To facilitate changes in its 1973 numismatic programs, the Mint requests that inquiries about the1973 Proof Coin Sets be delayed until public announcement is made as to when orders will be accepted. At that time order cards will be mailed to all on the Mint’s mailing list. Any orders received prior to the acceptance date will necessarily have to be returned.