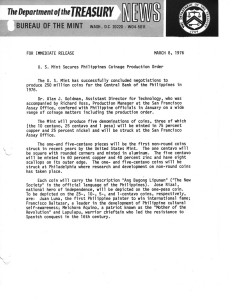 The U. S. Mint has successfully concluded negotiations to produce 250 million coins for the Central Bank of the Philippines in 1976.

Dr. Alan J. Goldman, Assistant Director for Technology, who was accompanied by Richard Voss, Production Manager at the San Francisco Assay Office, confered with Philippine officials in January on a wide range of coinage matters including the production order.

The Mint will produce five denominations of coins, three of which (the 10 centavo, 25 centavo and 1 peso) will be minted in 75 percent copper and 25 percent nickel and will be struck at the San Francisco Assay Office.

The one-and five-centavo pieces will be the first non-round coins struck in recent years by the United States Mint. The one centavo will be square with rounded corners and minted in aluminum. The five centavo will be minted in 60 percent copper and 40 percent zinc and have eight scallops on its outer edge. The one- and five-centavo coins will be struck at Philadelphia where research and development on non-round coins has taken place.

Each coin will carry the inscription “Ang Bagong Lipunan” (“The New Society” in the official language of the Philippines). Jose Rizal, national hero of independence, will be depicted on the one-peso coin. To be depicted on the 25-, 10-, 5-, and 1-centavo coins, respectively, are: Juan Luna, the first Philippine painter to win international fame; Francisco Baltazar, a leader in the development of Philippine cultural self-awareness; Melchora Aquino, a patriot known as the “Mother of the Revolution” and Lapulapu, warrior chieftain who led the resistance to Spanish conquest in the 16th century.