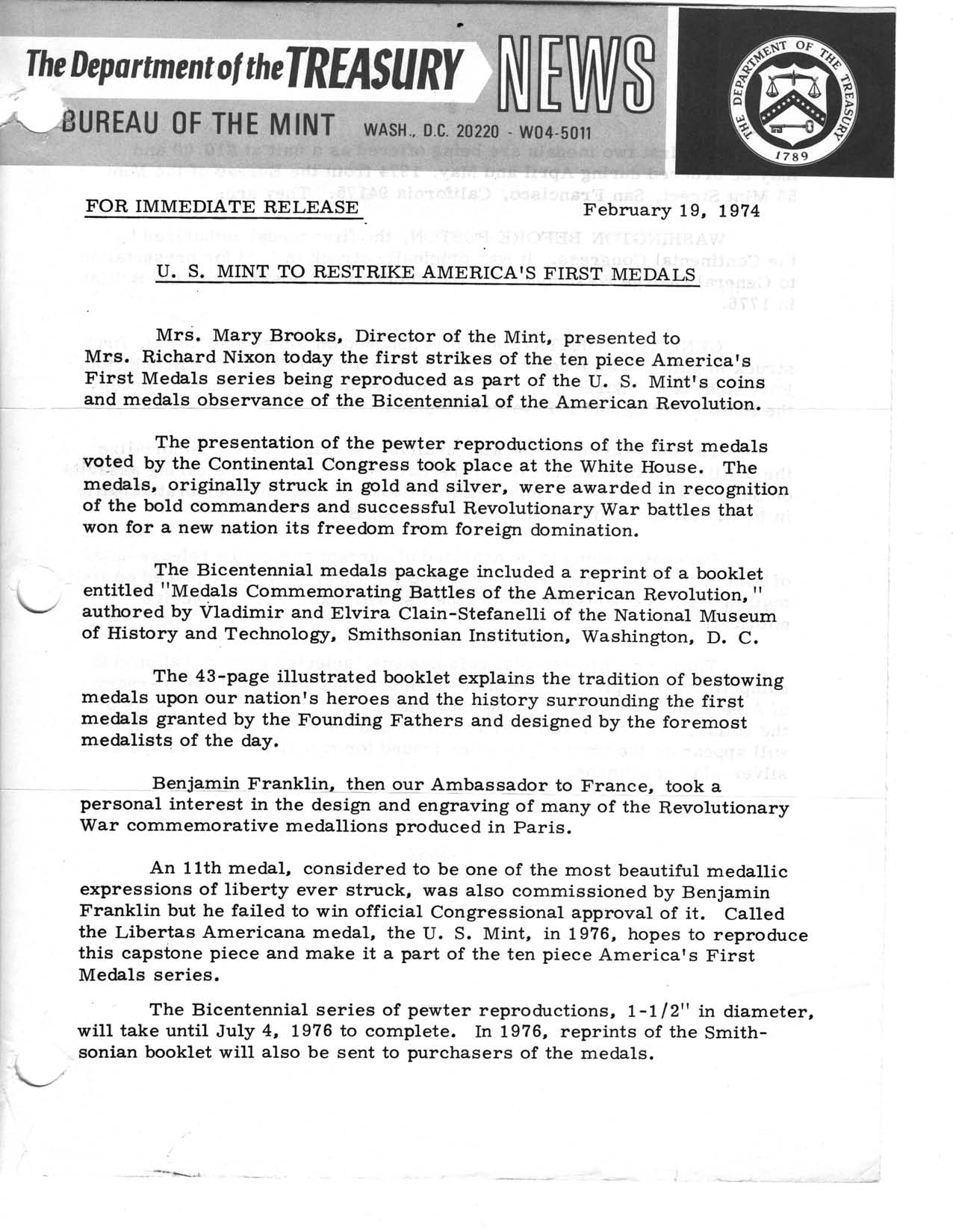 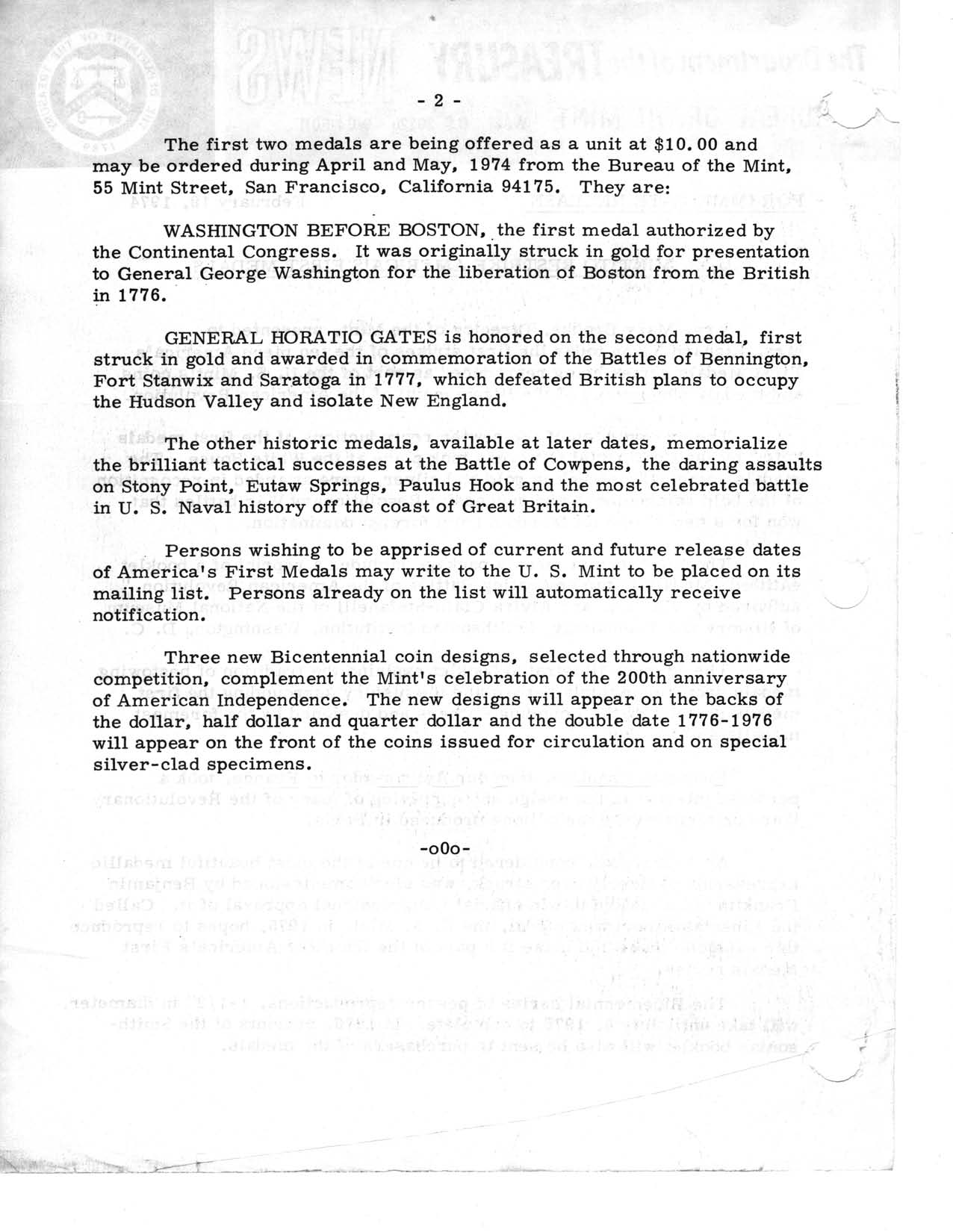 Mrs. Mary Brooks, Director of the Mint, presented Mrs. Richard Nixon today the first strikes of the ten piece America’s First Medals series being produced as part of the U.S. Mint’s coins and medals observance of the Bicentennial of the American Revolution.

The presentation of the pewter reproductions of the first medals voted by the Continental Congress took place at the White House. The medals, originally struck in gold and silver, were awarded in recognition of the bold commanders and successful Revolutionary War battles that won for a new nation its freedom from foreign domination.

The Bicentennial medals package included a reprint of a booklet entitled “Medals Commemorating Battles of the American Revolution,” authored by Vladimir and Elvira Clain-Stefanelli of the National Museum of History and Technology, Smithsonian Institution, Washington, D.C.

The 43-page illustrated booklet explains the tradition of bestowing medals upon our nation’s heroes and the history surrounding the first medals granted by the Founding Fathers and designed by the foremost medalists of the day.

Benjamin Franklin, then our Ambassador to France, took a personal interest in the design and engraving of many of the Revolutionary War commemorative medallions produced in Paris.

An 11th medal, considered to be one of the most beautiful medallic expressions of liberty ever struck, was also commissioned by Benjamin Franklin but he failed to win official Congressional approval of it. Called the Libertas Americana medal, the U.S. Mint, in 1976, hopes to reproduce this capstone piece and make it a part of the ten piece America’s First Medals series.

The Bicentennial series of pewter reproductions, 1-1/2″ in diameter, will take until July 4, 1976 to complete. In 1976, reprints of the Smithsonian booklet will also be sent to purchasers of the medals.

WASHINGTON BEFORE BOSTON, the first medal authorized by the Continental Congress. It was originally struck in gold for presentation to General George Washington for the liberation of Boston from the British in 1776.

GENERAL HORATIO GATES is honored on the second medal, first struck in gold and awarded in commemoration of the Battles of Bennington, Fort Stanwix and Saratoga in 1777, which defeated British plans to occupy the Hudson Valley and isolate New England.

The other historic medals, available at later dates, memorialize the brilliant tactical successes at the Battle of Cowpens, the daring assaults on Stony Point, Eutaw Springs, Paulus Hook and the most celebrated battle in U.S. Naval history off the coast of Great Britain.

Persons wishing to be apprised of current and future release dates of America’s First Medals may write to the U. S. Mint to be placed on its mailing list. Persons already on the list will automatically receive notification.

Three new Bicentennial coin designs, selected through nationwide competition, complement the Mint’s celebration of the 200th anniversary of American Independence. The new designs will appear on the backs of the dollar, half dollar and quarter dollar and the double date 1776-1976 will appear on the front of the coins issued for circulation and on special silver-clad specimens.