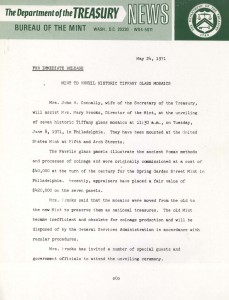 Mrs. John B. Connally, wife of the Secretary of the Treasury, will assist Mrs. Mary Brooks, Director of the Mint, at the unveiling of seven historic Tiffany glass mosaics at 11:30 a.m., on Tuesday, June 8, 1971, in Philadelphia. They have been mounted at the United States Mint at Fifth and Arch Streets.

The Favrile glass panels illustrate the ancient Roman methods and processes of coinage and were originally commissioned at a cost of $40,000 at the turn of the century for the Spring Garden Street Mint in Philadelphia. Recently, appraisers have placed a fair value of $420,000 on the seven panels.

Mrs. Brooks said that the mosaics were moved from the old to the new Mint to preserve them as national treasures. The old Mint became inefficient and obsolete for coinage production and will be disposed of by the General Services Administration in accordance with regular procedures.

Mrs. Brooks has invited a number of special guests and government officials to attend the unveiling ceremony.