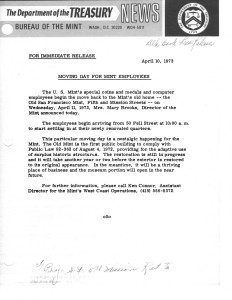 The employees begin arriving from 50 Fell Street at 10:00 a.m. to start settling in at their newly renovated quarters.

This particular moving day is a nostalgic happening for the Mint. The Old Mint is the first public building to comply with Public Law 92-362 of August 4, 1972, providing for the adaptive use of surplus historical structures. The restoration is still in progress and it will take another year or two before the exterior is restored to its original appearance. In the meantime, it will be a thriving place of business and the museum portion will open in the near future.