New Designs for the Gold Coinage 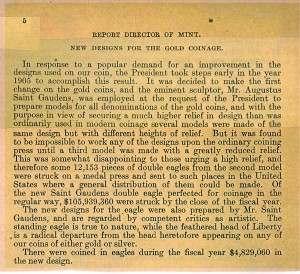 In response to a popular demand for an improvement in the designs used on our coin, the President took steps early in the year 1905 to accomplish this result. It was decided to make the first change on the gold coins, and the eminent sculptor, Mr. Augustus Saint Gaudens, was employed at the request of the President to prepare models for all denominations of the gold coins, and with the purpose in view of securing a much higher relief in design than was ordinarily used in modern coinage several models were made of the same design but with different heights of relief. But it was found to be impossible to work any of the designs upon the ordinary coining press until a third model was made with a greatly reduced relief. This was somewhat disappointing to those urging a high relief, and therefore some 12,153 pieces of double eagles from the second model were struck on a medal press and sent to such places in the United States were a general distribution of them could be made. Of the new Saint Gaudens double eagle perfected for coinage in the regular way, $105,939,360 were struck by the close of the fiscal year.

The new designs for the eagle were also prepared by Mr. Saint Gaudens, and are regarded by competent critics as artistic. The standing eagle is true to nature, while the feathered head of Liberty is a radical departure from the head heretofore appearing on any of our coins of either gold or silver.

There were coined in eagles during the fiscal year $4,829,060 in the new design.