New Orleans Mint to Be Featured at ANA’s Annual Convention 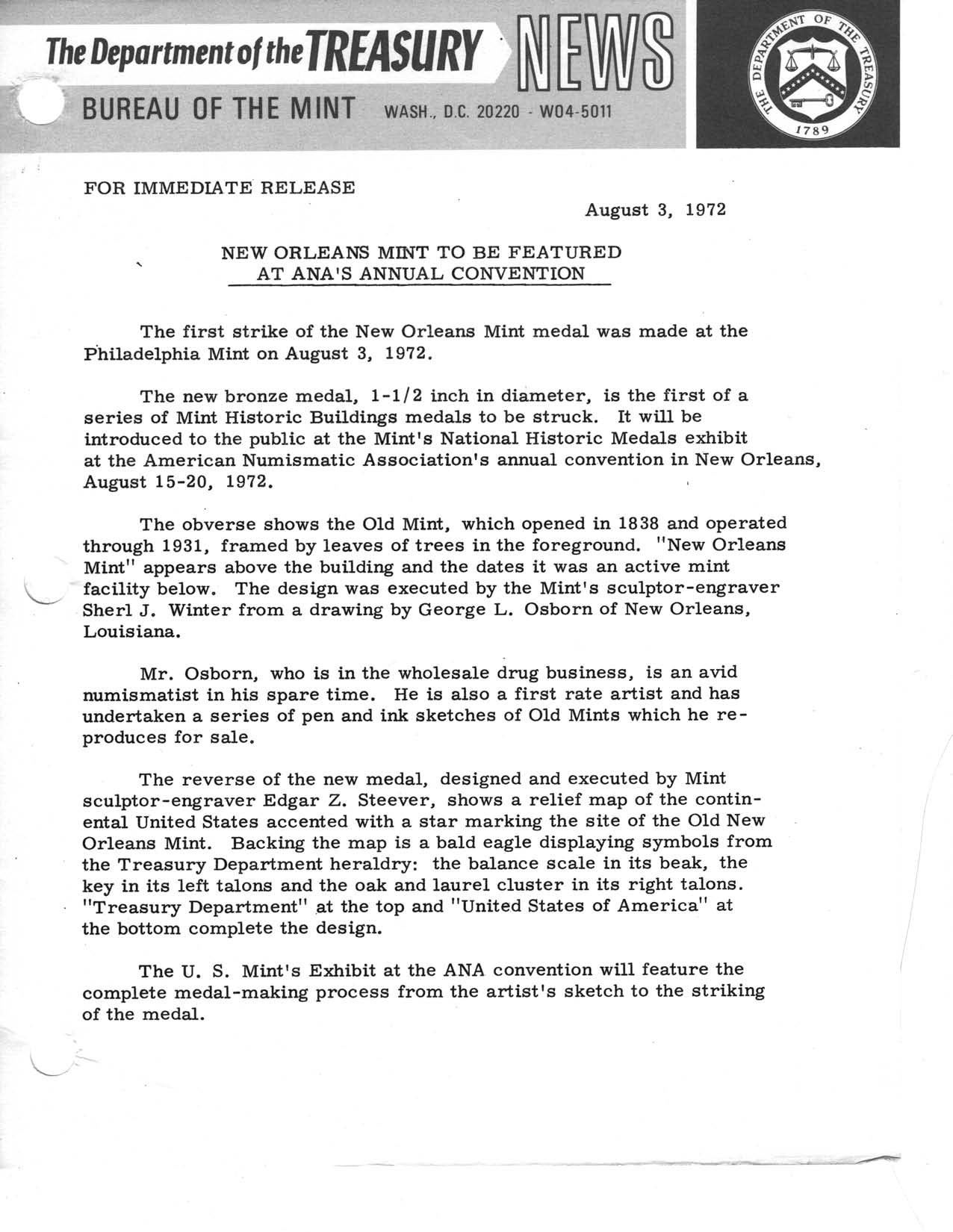 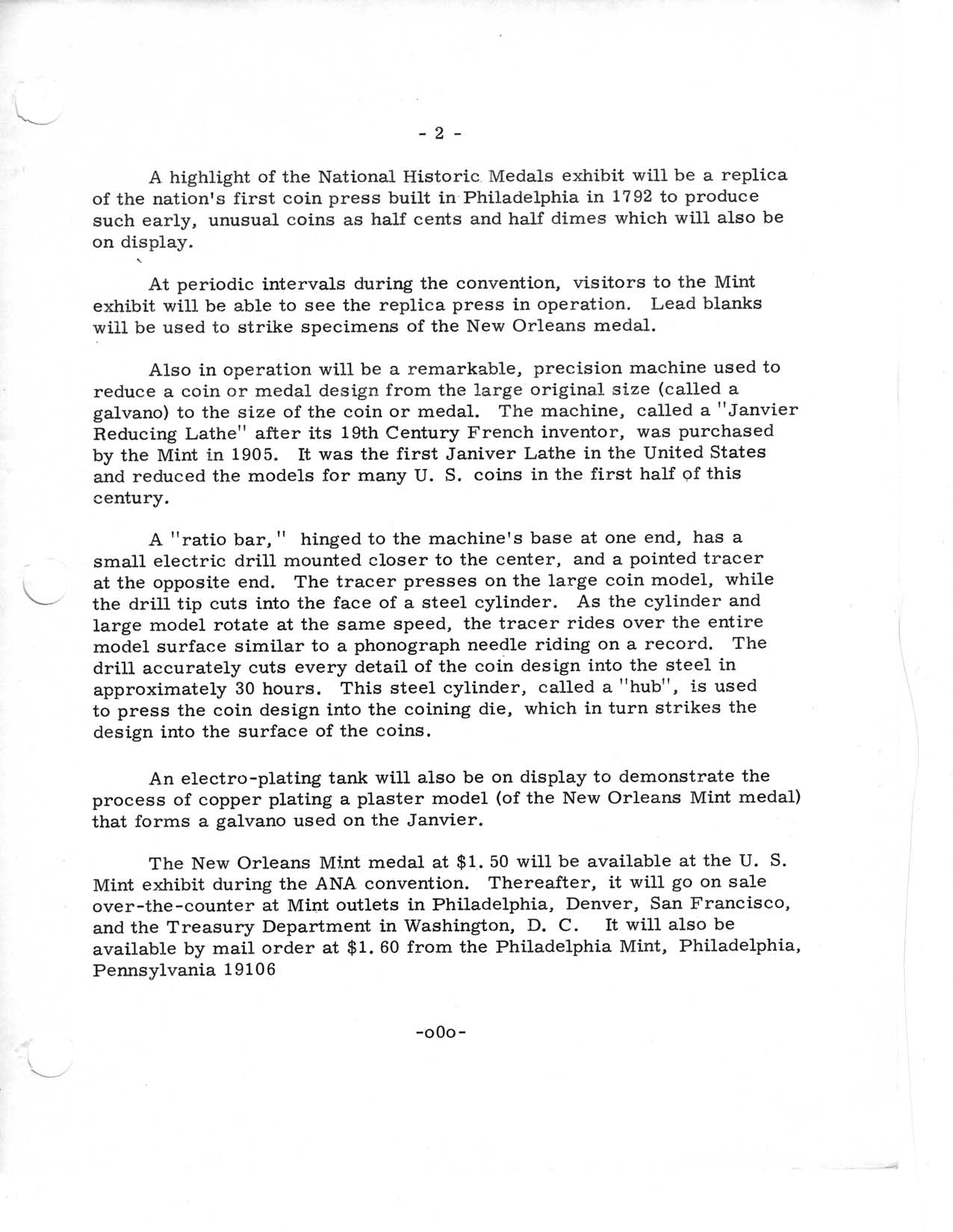 The first strike of the New Orleans Mint medal was made at the Philadelphia Mint on August 3, 1972.

The new bronze medal, 1-1/2 inch in diameter, is the first of a series of Mint Historic Buildings medals to be struck. It will be introduced to the public at the Mint’s National Historic Medals exhibit at the American Numismatic Association’s annual convention in New Orleans, August 15-20, 1972.

The obverse shows the Old Mint, which opened in 1838 and operated through 1931, framed by leaves in the foreground. “New Orleans Mint” appears above the building and the dates it was an active mint facility below. The design was executed by the Mint’s sculptor-engraver Sherl J. Winter from a drawing by George L. Osborn of New Orleans, Louisiana.

Mr. Osborn, who is in the wholesale drug business, is an avid numismatist in his spare time. He is also a first rate artist and has undertaken a series of pen and ink sketches of Old Mints which he reproduces for sale.

The reverse of the new medal, designed and executed by Mint sculptor-engraver Edgar Z. Steever, shows a relief map of the continental United States accented with a star marking the site of the Old New Orleans Mint. Backing the map is a bald eagle displaying symbols from the Treasury Department heraldry: the balance scale in its beak, the key in its left talons and the oak and laurel cluster in its right talons. “Treasury Department” at the top and “United States of America” at the bottom complete the design.

The U.S. Mint’s Exhibit at the ANA convention will feature the complete medal-making process from the artist’s sketch to the striking of the medal.

A highlight of the National Historic Medals exhibit will be a replica of the nation’s first coin press built in Philadelphia in 1792 to produce such early, unusual coins as half cents and half dimes which will also be on display.

At periodic intervals during the convention, visitors to the Mint exhibit will be able to see the replica press in operation. Lead blanks will be used to strike specimens of the New Orleans medal.

Also in operation will be a remarkable, precision machine used to reduce a coin or medal design from the large original size (called a galvano) to the size of the coin or medal. The machine, called a “Janvier Reducing Lathe” after its 19th Century French inventor, was purchased by the Mint in 1905. It was the first Janvier Lathe in the United States and reduced the models for many U.S. coins in the first half of this century.

A “ratio bar,” hinged to the machine’s base at one end, has a small electric drill mounted closer to the center, and a pointed tracer at the opposite end. The tracer presses on the large coin model, while the drill tip cuts into the face of a steel cylinder. As the cylinder and large model rotate at the same speed, the tracer rides over the entire model surface similar to a phonograph needle riding on a record. The drill accurately cuts every detail of the coin design into the steel in approximately 30 hours. This steel cylinder, called a “hub”, is used to press the coin design into the coining die, which in turn strikes the design into the surface of the coins.

An electro-plating tank will also be on display to demonstrate the process of copper plating a plaster model (of the New Orleans Mint medal) that forms a galvano used on the Janvier.

The New Orleans Mint medal at $1.50 will be available at the U.S. Mint exhibit during the ANA convention. Thereafter, it will go on sale over-the-counter at Mint outlets in Philadelphia, Denver, San Francisco, and the Treasury Department in Washington, D. C. It will also be available by mail order at $1.60 from the Philadelphia Mint, Philadelphia, Pennsylvania 19106.