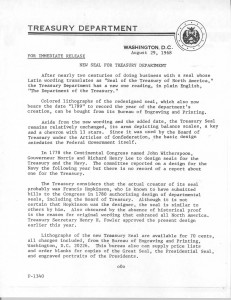 Colored lithographs of the redesigned seal, which also now bears the date “1789” to record the year of the department’s creation, can be bought from its Bureau of Engraving and Printing.

Aside from the new wording and the added date, the Treasury Seal remains relatively unchanged, its arms depicting balance scales, a key and a chevron with 13 stars. Since it was used by the Board of Treasury under Articles of Confederation, the basic design antedates the Federal Government itself.

In 1778 the Continental Congress named John Witherspoon, Gouverneur Morris and Richard Henry Lee to design seals for the Treasury and the Navy. The committee reported on a design for the Navy the following year but there is no record of a report about one for the Treasury.

The Treasury considers that the actual creator of its seal probably was Francis Hopkinson, who is known to have submitted bills to the Congress in 1780 authorizing design of departmental seals, including the Board of Treasury. Although it is not certain that Hopkinson was the designer, the seal is similar to others by him. Also obscured by the absence of historical proof is the reason for original wording that embraced all North America. Treasury Secretary Henry H. Fowler approved the present design earlier this year.

Lithographs of the new Treasury Seal are available for 70 cents, all charges included, from the Bureau of Engraving and Printing, Washington, D.C. 20226. This bureau also can supply price lists and order blanks for copies of the Great Seal, the Presidential Seal, and engraved portraits of the Presidents.