Nomination of Mary T. Brooks for Reappointment as Director of the Mint 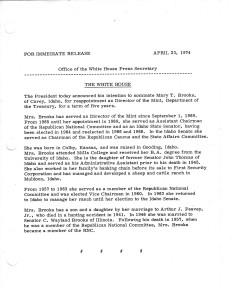 The President today announced his intention to nominate Mary T. Brooks, of Carey, Idaho, for reappointment as Director of the Mint, Department of the Treasury, for a term of five years.

She was born in Colby, Kansas, and was raised in Gooding, Idaho. Mrs. Brooks attended Mills College and received her B.A. degree from the University of Idaho. She is the daughter of former Senator John Thomas of Idaho and served as his Administrative Assistant prior to his death in 1945. She also worked in her family’s banking chain before its sale to First Security Corporation and has managed and developed a sheep and cattle ranch in Muldoon, Idaho.

From 1957 to 1963 she served as a member of the Republican National Committee and was elected Vice Chairman in 1960. In 1963 she returned to Idaho to manage her ranch until her election to the Idaho Senate.

Mrs. Brooks has a son and a daughter by her marriage to Arthur J. Peavey, Jr., who died in a hunting accident in 1941. In 1946 she was married to Senator C. Wayland Brooks of Illinois. Following his death in 1957, when he was a member of the Republican National Committee, Mrs. Brooks became a member of the RNC.