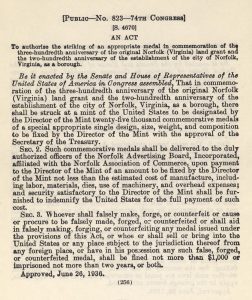 Be it enacted by the Senate and House of Representatives of the United States of America in Congress assembled, That in commemoration of the three-hundredth anniversary of the original Norfolk (Virginia) land grant and the two-hundredth anniversary of the establishment of the city of Norfolk, Virginia, as a borough, there shall be struck at a mint of the United States to be designated by the Director of the Mint twenty-five thousand commemorative medals of a special appropriate single design, size, weight, and composition to be fixed by the Director of the Mint with the approval of the Secretary of the Treasury.