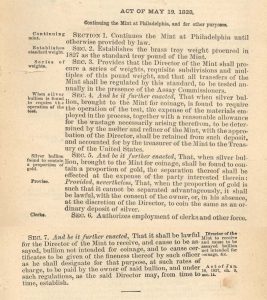 Continuing the Mint at Philadelphia, and for other purposes.

SECTION 1. Continues the Mint at Philadelphia until otherwise provided by law.

SEC. 2. Establishes the brass toy weight procured in 1827 as the standard troy pound of the Mint.

SEC. 3. Provides that the Director of the Mint shall procure a series of weights, requisite subdivisions and multiples of this pound weight, and that all transfers of the Mint shall be regulated by this standard, to be tested annually in the presence of the Assay Commissioners.

SEC. 4. And be it further enacted, That when silver bullion, brought to the Mint for coinage, is found to require the operation of the test, the expense of the materials employed in the process, together with a reasonable allowance for the wastage necessarily arising therefrom, to be determined by the melter and refiner of the Mint, with the approbation of the Director, shall be retained from such deposit, and accounted for by the treasurer of the Mint to the Treasury of the United States.

SEC. 5. And be it further enacted, That, when silver bullion, brought to the Mint for coinage, shall be found to contain a proportion of gold, the separation thereof shall be effected at the expense of the party interested therein: Provided, nevertheless, That, when the proportion of gold is such that it cannot be separated advantageously, it shall be lawful, with the consent of the owner, or, in his absence, at the discretion of the Director, to coin the same as an ordinary deposit of silver.

SEC. 6. Authorizes employment of clerks and other force.

SEC. 7. And be it further enacted, That it shall be lawful for the Director of the Mint to receive, and cause to be assayed, bullion not intended for coinage, and to cause certificates to be given of the fineness thereof by such officer as he shall designate for that purpose, at such rates of charge, to be paid by the owner of said bullion, and under such regulations, as the said Director may, for time to time, establish.