Sale of Gold by the U.S. Treasury 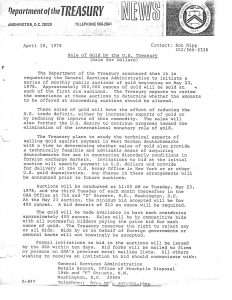 The Department of the Treasury announced that it is requesting the General Services Administration to initiate a series of monthly public auctions of gold beginning on May 23, 1978. Approximately 300,000 ounces of gold will be sold at each of the first six auctions. The Treasury expects to review the experience at these auctions to determine whether the amounts to be offered at succeeding auctions should be altered.

These sales of gold will have the effect of reducing the U.S. trade deficit, either by increasing exports of gold or by reducing the imports of this commodity. The sales will also further the U.S. desire to continue progress toward the elimination of the international monetary role of gold.

The Treasury plans to study the technical aspects of selling gold against payment in West German deutschemarks with a view to determining whether sales of gold also provide a technically feasible and advisable means of acquiring deutschemarks for use in countering disorderly conditions in foreign exchange markets. Invitations to bid at the initial auction will specify payment in U.S. dollars and provide for delivery at the U. S. Assay Office in New York or at other U.S. gold depositories. Any change in these arrangements will be announced prior to future auctions.

The gold will be made available in bars each containing approximately 400 ounces. Sales will be by competitive bids with all successful bidders paying the price bid for each ounce of gold. The Treasury reserves the right to reject any or all bids. Bids by or on behalf of foreign governments or central banks will not knowingly be accepted.

Formal invitations to bid in the auction will be issued by the GSA within ten days. Bid forms will be mailed to firms or persons on GSA’s precious metal mailing lists. All others wishing to receive an invitation to bid should communicate with: