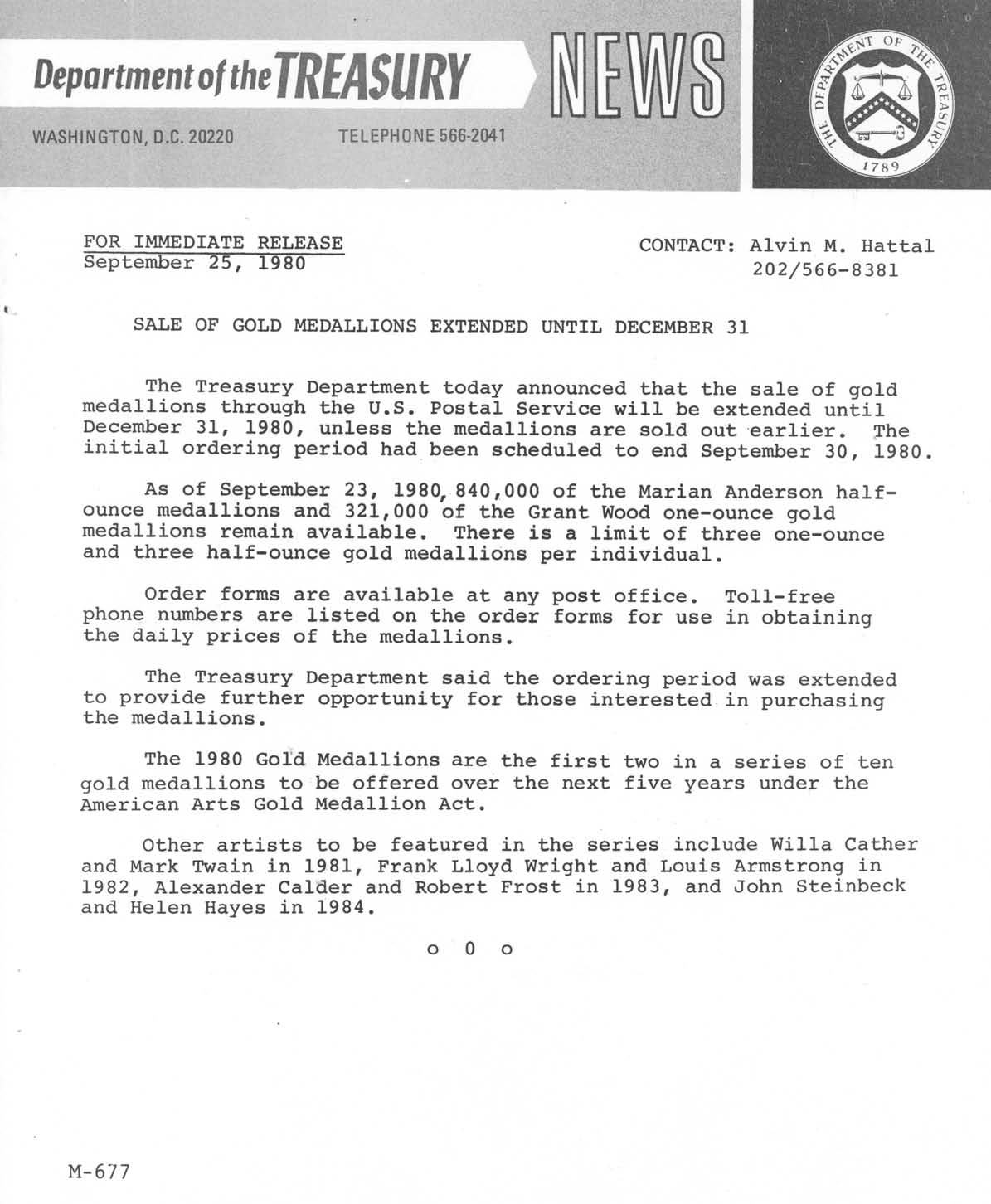 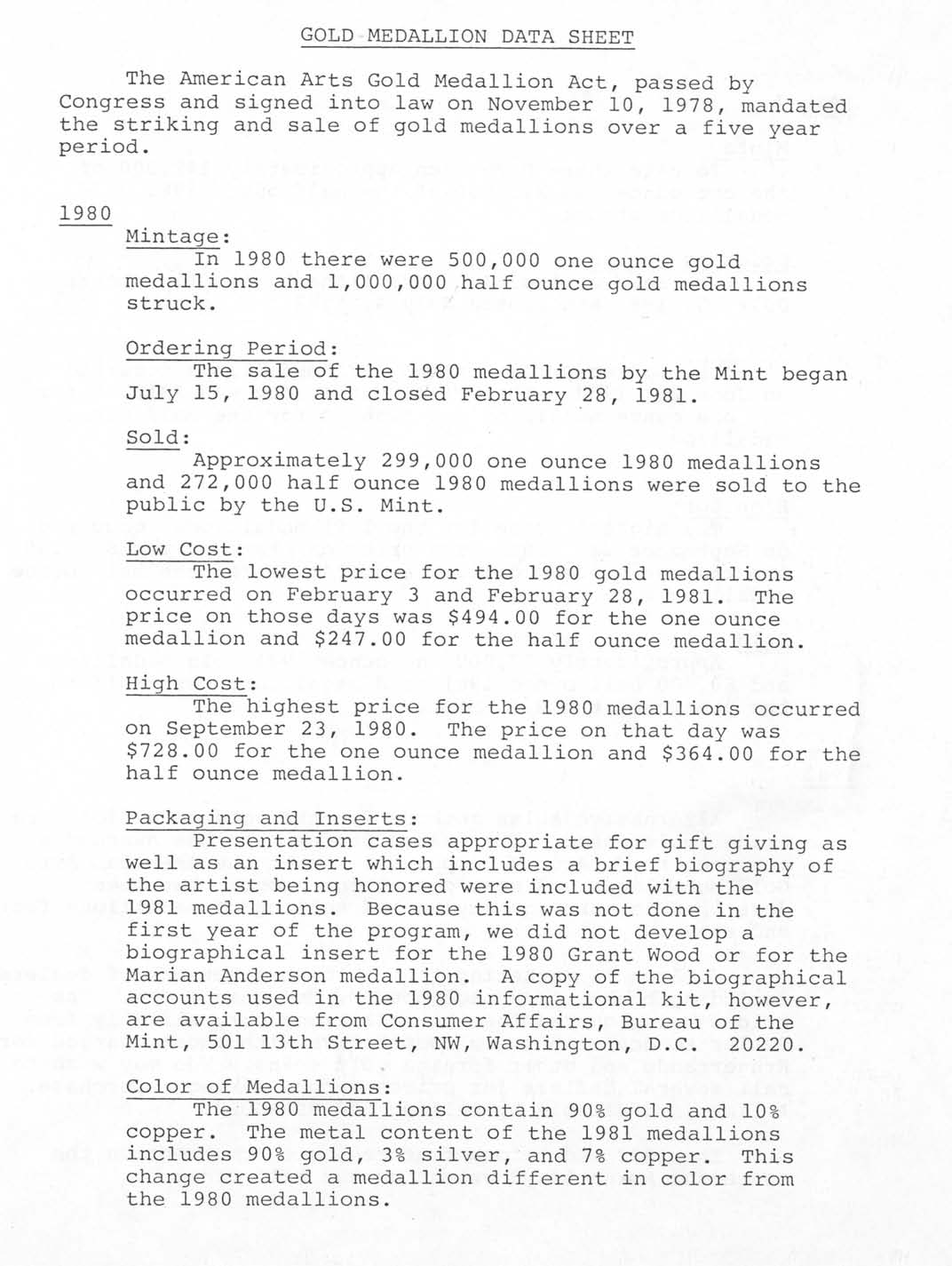 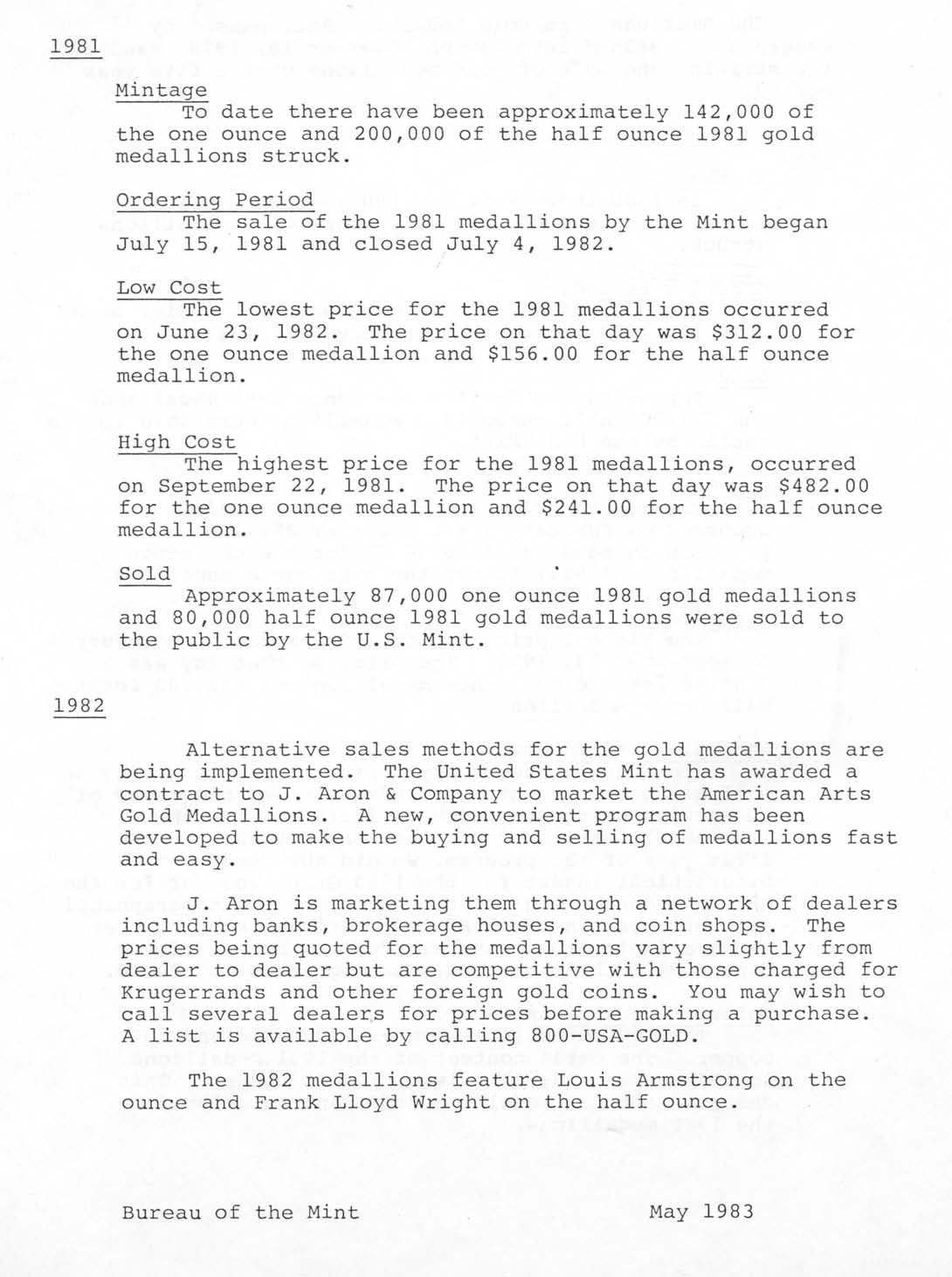 The Treasury Department today announced that the sale of gold medallions through the U.S. Postal Service will be extended until December 31, 1980, unless the medallions are sold out earlier. The initial ordering period had been scheduled to end September 30, 1980.

Order forms are available at any post office. Toll-free phone numbers are listed on the order forms for use in obtaining the daily prices of the medallions.

The 1980 Gold Medallions are the first two in a series of ten gold medallions to be offered over the next five years under the American Arts Gold Medallion Act.

Other artists to be featured in the series include Willa Cather and Mark Twain in 1981, Frank Lloyd Wright and Louis Armstrong in 1982, Alexander Calder and Robert Frost in 1983, and John Steinbeck and Helen Hayes in 1984.

The American Arts Gold Medallion Act, passed by Congress and signed into law on November 10, 1978, mandated the striking and sale of gold medallions over a five year period.

Presentation cases appropriate for gift giving as well as an insert which includes a brief biography of the artist being honored were included with the 1981 medallions. Because this was not done in the first year of the program, we did not develop a biographical insert for the 1980 Grant Wood or for the Marian Anderson medallion. A copy of the biographical accounts used in the 1980 informational kit, however, are available from Consumer Affairs, Bureau of the Mint, 501 13th Street, NW, Washington, D.C. 20220.

Color of the Medallions

Alternative sales methods for the gold medallions are being implemented. The United States Mint has awarded a contract to J. Aron & Company to market the American Arts Gold Medallions. A new, convenient program has been developed to make the buying and selling of medallions fast and easy.

J. Aron is marketing them through a network of dealers including banks, brokerage houses, and coin shops. The prices being quoted for the medallions vary slightly from dealer to dealer but are competitive with those charged for Krugerrands and other foreign gold coins. You may wish to call several dealers for prices before making a purchase. A list is available by calling 800-USA-GOLD.

The 1982 medallions feature Louis Armstrong on the ounce and Frank Lloyd Wright on the half ounce.