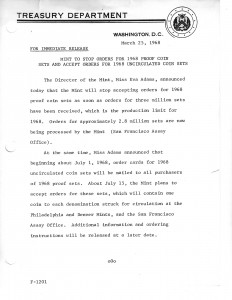 The Director of the Mint, Miss Eva Adams, announced today that the Mint will stop accepting orders for 1968 proof coin sets as soon as orders for three million sets have been received, which is the production limit for 1968. Orders for approximately 2.8 million sets are now being processed by the Mint (San Francisco Assay Office).

At the same time, Miss Adams announced that beginning about July 1, 1968, order cards for 1968 uncirculated coin sets will be mailed to all purchasers of 1968 proof sets. About July 15, the Mint plans to accept orders for these sets, which will contain one coin to each denomination struck for circulation at the Philadelphia and Denver Mints, and the San Francisco Assay Office. Additional information and ordering instructions will be released at a later date.