Suit Against the Superintendent and Melter and Refiner at San Francisco

Excerpt from Annual Report of the Director of the Mint to the Secretary of the Treasury for the Fiscal Year Ended June 30, 1883
Washington: Government Printing Office, 1883, 5448 M, Page 17. – Historical Reference Collection, United States Mint 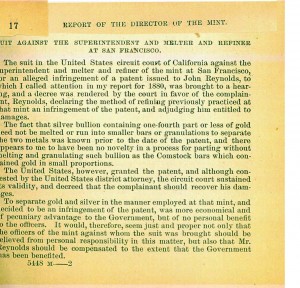 The suit in the United States circuit court of California against the superintendent and melter and refiner of the mint at San Francisco, for an alleged infringement of a patent issued to John Reynolds, to which I called attention in my report for 1880, was brought to a hearing, and a decree was rendered by the court in favor of the complainant, Reynolds, declaring the method of refining previously practiced at that mint an infringement of the patent, and adjudging him entitled to damages.

The fact that silver bullion containing one-fourth part or less of gold need not be melted or run into smaller bars or granulations to separate the two metals was known prior to the date of the patent, and there appears to me to have been no novelty in a process for parting without melting and granulating such bullion as the Comstock bars which contained gold in small proportions.

The United States, however, granted the patent, and although contested by the United States district attorney, the circuit court sustained its validity, and decreed that the complainant should recover his damages.

To separate gold and silver in the manner employed at that mint, and decided to be an infringement of the patent, was more economical and of pecuniary advantage to the Government, but of no personal benefit to the officers. It would, therefore, seem just and proper not only that the officers of the mint against whom the suit was brought should be relieved from personal responsibility in this matter, but also that Mr. Reynolds should be compensated to the extent that the Government has been benefited.