Notice to the Press: Transfer of the Old San Francisco Mint 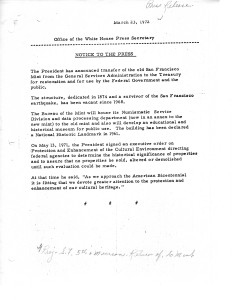 The President has announced transfer of the old San Francisco Mint from the General Services Administration to the Treasury for restoration and for use by the Federal Government and the public.

The structure, dedicated in 1874 and a survivor of the San Francisco earthquake, has been vacant since 1968.

The Bureau of the Mint will house its Numismatic Service Division and data processing department (now in an annex to the new mint) to the old mint and also will develop an educational and historical museum for public use. The building has been declared a National Historic Landmark in 1961.

On May 13, 1971, the President signed an executive order on Protection and Enhancement of the Cultural Environment directing federal agencies to determine the historical significance of properties and to assure that no properties be sold, altered or demolished until such evaluation could be made.

At that time he said, “As we approach the American Bicentennial it is fitting that we devote greater attention to the protection and enhancement of our cultural heritage.”